Tierra de Nadie (English: No man's land) is the fifth studio album by the Spanish heavy metal band Barón Rojo. It was released in 1987. [1] 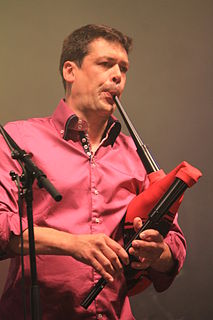 José Ángel Hevia Velasco, known professionally as Hevia, is a Spanish bagpiper – specifically, an Asturian gaita player. He commonly performs with his sister, María José, on drums. In 1992 he was awarded first prize for solo bagpipes at the Festival Interceltique de Lorient, Brittany.

Barón Rojo is a Spanish heavy metal band, who reached international success in the 1980s. The band was led by siblings Carlos and Armando de Castro, previously from the band Coz, and it is considered one of the most important representatives of Spanish hard rock bands. "Barón Rojo" in Spanish is "Red Baron", the name of the band is an homage to Manfred von Richthofen, and the eponymous song "Barón Rojo" is about him.

The XLVII Award of the Premio Ariel (2005) of the Academia Mexicana de Artes y Ciencias Cinematográficas took place on March 29 of 2005 at the Palacio de Bellas Artes. The Premio Ariel for the best movie was awarded to Temporada de patos.

TeleHit is a Mexican cable/satellite television network. Its main programming is music and music videos. It is a part of Televisa Networks, an affiliate of Televisa, and is also available in various countries in Latin America and United States.

Bertha Moss, born Juana Bertha Moscovish Holm, was an actress of the stage, telenovelas and cinema of Mexico, famous for debuting many Mexican telenovelas. She was born in Buenos Aires Argentina. She died February 4, 2008 in Buenos Aires. 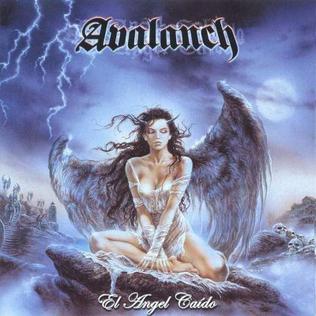 El Ángel Caído is the third studio album by the Spanish Power metal band Avalanch and the last one featuring Víctor García, released in 2001. And the collaboration of Leo Jiménez.

Yolanda Andrade is a Mexican actress and television presenter born in Culiacán, Sinaloa. Her career started at the telenovela Yo no creo en los hombres (1991), along with Gabriela Roel and Alfredo Adame, which allowed her to work in bigger productions such as Las secretas intenciones (1992) with Cristian Castro. 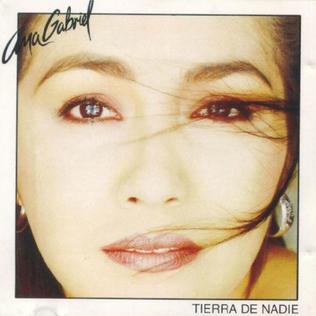 Tierra de Nadie is the fourth studio album by Mexican pop singer Ana Gabriel. It was released in 1988. She achieved international recognition with this album and it reached #1 in the Billboard Latin Pop Albums staying in the chart for 73 weeks. It sold four million worldwide. The album was given a Premio Lo Nuestro award for "Pop Album of the Year" in 1990.

"Simplemente Amigos" is a ballad written and performed by Mexican singer-songwriter Ana Gabriel and was produced by Mariano Pérez Bautista. Ir was released by CBS Discos on March 20, 1989 as the second single from his fourth studio album Tierra de Nadie (1988). The song became Gabriel's second number-one single in the Billboard Hot Latin Tracks chart after "Ay Amor" in late 1987. The success of the song led its parent album to its peak at number one in the Billboard Latin Pop Albums and approximate sales of six million units in Latin America.

Tierra de Nadie may refer to:

Ñu, also known as José Carlos Molina-Ñu, are a Spanish hard rock band formed in 1974 in Madrid. Their music style, often described as medieval rock, has medieval music, celtic rock and heavy metal influences. The band have experienced multiple line-up changes, with vocalist José Carlos Molina being the only constant presence in the band through the years. The flute predominance in their sound has been compared with Jethro Tull's style, but playing a way heavier sound they are in fact a predecessor of folk metal. As time went by, their style tended to be less folk and more heavier. Their lyrics usually are about medieval castles, riders, villains and heroes.

Marcela Zamora Chamorro is a Salvadoran-Nicaraguan documentary director and journalist. She has worked in El Salvador, Nicaragua, Mexico, Venezuela, and Cuba.

Miguel "Miki" Núñez Pozo, sometimes known by the mononym Miki, is a Spanish singer who represented Spain at the Eurovision Song Contest 2019 in Tel Aviv, with the song "La venda".