Tiesa was the official daily newspaper in the Lithuanian SSR from 1917 to 1994.

Tiesa may also refer to:

Tiesa (truth) was a Lithuanian-language newspaper published by the Association of Lithuanian Workers, a fraternal benefit society, from 1930 to 2006 when the association merged into the Supreme Council of the Royal Arcanum. The full collection of Tiesa issues is preserved at the Tamiment Library and Robert F. Wagner Archives in microfilm format.

Kauno diena is a Lithuanian daily newspaper, printed in Kaunas. 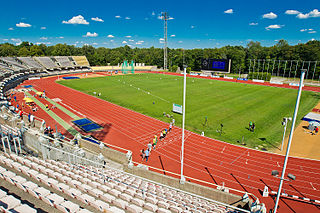 S. Darius and S. Girėnas stadium is a multi-use stadium in the Ąžuolynas park in Žaliakalnis district of Kaunas, Lithuania, that is now being reconstructed. The all-seater stadium will hold 15,315 people. In 1998 the stadium was renovated according to UEFA regulations, and in 2005 it was modernised with the installation of the biggest stadium television screen in the Baltic states. The latest renovation started in 2018. It will be the biggest stadium in the Baltic states. It hosts Lithuanian football matches as well as international athletics championships. During a sporting season about 50 events are held here.

Kaunas International Airport, is the second-busiest civil airport in Lithuania after Vilnius Airport and the fourth-busiest in the Baltic states. The airport is located in the central part of the country, 14 km (8.7 mi) northeast of the Kaunas city centre and 100 km west from the capital Vilnius.

Česlovas Juršėnas is a Lithuanian politician and a former Speaker of the Seimas, the Lithuanian parliament.

Algimantas Butnorius was a Lithuanian chess grandmaster and world seniors champion in 2007. From 2014 he represented Monaco.

Tomas Mikuckis is a Lithuanian professional football player. He plays in Lithuania for FK Kauno Žalgiris.

Saliutas Vilnius was a Lithuanian football club from Vilnius.

Futbolo klubas Kauno Žalgiris is a professional football club based in Kaunas, Lithuania, that competes in the A lyga, the top tier of Lithuania. The club was founded as FM Spyris Kaunas in 2004, became the football section of basketball club Žalgiris Kaunas and moved to their current stadium, the Darius and Girėnas Stadium, in 2015. After their debut season in the A Lyga, the club adapted the name FK Kauno Žalgiris in 2016.

The 2016 A Lyga, also known as SMSCredit.lt A Lyga for sponsoring purposes was the 27th season of the A Lyga, the top-tier association football league of Lithuania. The season began on 2 March and ended on 26 November 2016. Žalgiris Vilnius were the defending champions.

The 2018 Lithuanian Football Cup, also known as LFF Cup, is the seventy-third season of the Lithuanian annual football knock-out tournament. Forty-eight teams entered the competitions, which will start on 27 April and end on 30 September.