Last updated June 23, 2022
Continuous functions on a closed subset of a normal topological space can be extended

In topology, the Tietze extension theorem (also known as the Tietze–Urysohn–Brouwer extension theorem) states that continuous functions on a closed subset of a normal topological space can be extended to the entire space, preserving boundedness if necessary.

is a normal space and

is a continuous map from a closed subset

into the real numbers

carrying the standard topology, then there exists a continuous extension of

that is, there exists a map

continuous on all of

may be chosen such that

may be chosen to be bounded (with the same bound as

L. E. J. Brouwer and Henri Lebesgue proved a special case of the theorem, when

is a finite-dimensional real vector space. Heinrich Tietze extended it to all metric spaces, and Pavel Urysohn proved the theorem as stated here, for normal topological spaces. [1] [2]

This theorem is equivalent to Urysohn's lemma (which is also equivalent to the normality of the space) and is widely applicable, since all metric spaces and all compact Hausdorff spaces are normal. It can be generalized by replacing

for some indexing set

or any normal absolute retract whatsoever.

is a metric space,

a non-empty subset of

can be extended to a Lipschitz continuous function

This theorem is also valid for Hölder continuous functions, that is, if

is Hölder continuous function with constant less than or equal to

can be extended to a Hölder continuous function

with the same constant. [3]

Another variant (in fact, generalization) of Tietze's theorem is due to H.Tong and Z. Ercan: [4] Let

be a closed subset of a normal topological space

is an upper semicontinuous function,

a lower semicontinuous function, and

a continuous function such that

, then there is a continuous extension

This theorem is also valid with some additional hypothesis if

is replaced by a general locally solid Riesz space. [4]

In mathematics, specifically general topology, compactness is a property that seeks to generalize the notion of a closed and bounded subset of Euclidean space by making precise the idea of a space having no "holes" or "missing endpoints", i.e. that the space not exclude any "limiting values" of points. For example, the "unclosed" interval (0,1) would not be compact because it excludes the "limiting values" of 0 and 1, whereas the closed interval [0,1] would be compact. Similarly, the space of rational numbers is not compact because it has infinitely many "holes" corresponding to the irrational numbers, and the space of real numbers is not compact either because it excludes the limiting values and . However, the extended real number line would be compact, since it contains both infinities. There are many ways to make this heuristic notion precise. These ways usually agree in Euclidean space, but may be inequivalent in other topological spaces.

In mathematics, a metric space is a set together with a metric on the set. The metric is a function that defines a concept of distance between any two members of the set, which are usually called points. The metric satisfies the following properties:

In topology, Urysohn's lemma is a lemma that states that a topological space is normal if and only if any two disjoint closed subsets can be separated by a continuous function. 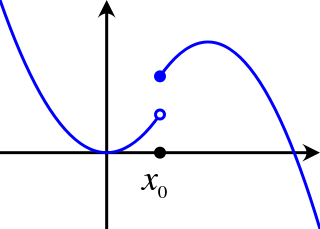 The Katětov–Tong insertion theorem is a theorem of point-set topology proved independently by Miroslav Katětov and Hing Tong in the 1950s. The theorem states the following:

The maximum theorem provides conditions for the continuity of an optimized function and the set of its maximizers with respect to its parameters. The statement was first proven by Claude Berge in 1959. The theorem is primarily used in mathematical economics and optimal control.

In mathematics, the Blumberg theorem states that for any real function there is a dense subset of such that the restriction of to is continuous.

In mathematical analysis, the spaces of test functions and distributions are topological vector spaces (TVSs) that are used in the definition and application of distributions. Test functions are usually infinitely differentiable complex-valued functions on a non-empty open subset that have compact support. The space of all test functions, denoted by is endowed with a certain topology, called the canonical LF-topology, that makes into a complete Hausdorff locally convex TVS. The strong dual space of is called the space of distributions on and is denoted by where the "" subscript indicates that the continuous dual space of denoted by is endowed with the strong dual topology.