Tiféret Israel Synagogue is a Jewish synagogue located in El Recreo, close to Plaza Venezuela in Caracas, capital of Venezuela. It is also the headquarters of the Israelite Association of Venezuela.

In 1954, the Sephardic Jewish community of Caracas reached an agreement to buy private land in Maripérez, Caracas, in order to build a synagogue to replace the one located in the El Conde area, which had to be demolished as part of the construction of the Bolivar avenue, the main highway during that time. Finally in 1956 the first stone was laid; the synagogue was formally inaugurated and opened to the public in 1963, and since then has served as a religious temple for the Jewish community of Caracas.

In late January 2009, the synagogue was desecrated and vandalized by a criminal gang. [1] The attack followed escalating tensions between the Israeli and Venezuelan governments after the Gaza–Israel conflict of 2008–2009. [2] Three former policemen and three civilians were found guilty and sentenced to ten years in jail. [3] 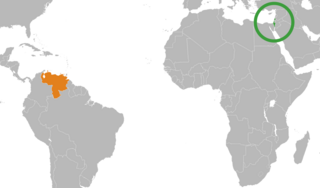 Israeli–Venezuelan relations refer to foreign relations between the State of Israel and the Bolivarian Republic of Venezuela. Both countries have no formal relations since 2009 but since the 2019 presidential crisis, self-declared interim president Juan Guaidó is currently under the process to restore diplomatic relations between the two countries. Canada serves as Israel's protecting power in Venezuela through its embassy in Caracas, while Spain serves as Venezuela's protecting power in Israel through its embassy in Tel Aviv.

Tiferet Yisrael Synagogue, most often spelled Tiferet Israel, also known as the Nisan Bak Shul, after its co-founder, Nisan Bak. was a prominent synagogue between 1872 and 1948 in the Jewish Quarter of the Old City of Jerusalem. 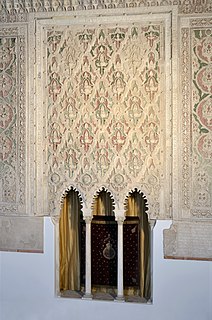 The Synagogue of El Tránsito, also known as the Synagogue of Samuel ha-Levi or Halevi, is a historic synagogue, church, and Sephardic museum in Toledo, Spain. It was built as an annex of the palace of Samuel ha-Levi Abulafia, treasurer to King Peter of Castile, in 1357. The synagogue was converted into a church after the expulsion of the Jews from Spain in 1492. It was briefly used as military barracks during the Napoleonic Wars of the early 1800s. It became a museum in 1910. Today it is formally known as the Sephardi Museum. The building is known for its rich stucco decoration, its Mudejar style, and its women's gallery. 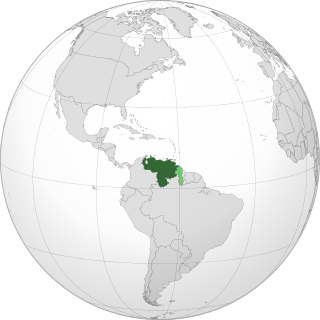 The history of the Jews in Venezuela dates to the middle of the 17th century, when records suggest that groups of marranos lived in Tucacas, Caracas and Maracaibo. The Jewish community, however, did not become established in Venezuela until the middle of the 19th century. Since Hugo Chávez took power in 1999, tension has existed between the government and Jewish population, which has seen large numbers emigrating. Today, the majority of Venezuelan Jews live in Israel, while modern-day Venezuela continues to host a modest Jewish population.

Pynchas Brener (1931) is the Ashkenazi Chief Rabbi of Caracas, Venezuela, starting in 1967. He received his Bachelor of Arts and Rabbinic Ordination from Yeshiva University and his Master's degree from Columbia University, and is a PhD honoris causa of Bar Ilan University. 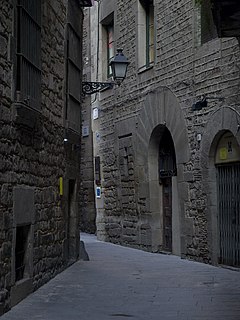 The Ancient Synagogue of Barcelona is believed to be an ancient synagogue located in the centre of Barcelona, Catalonia, Spain. It has been described as one of the oldest synagogues in Europe. After many centuries of use for other purposes, the building re-opened as a synagogue and museum in 2002. No congregation prays regularly at the Sinagoga Major, but it is used for festive occasions.

Antisemitic incidents escalated worldwide in frequency and intensity during the Gaza War, and were widely considered to be a wave of reprisal attacks in response to the conflict. 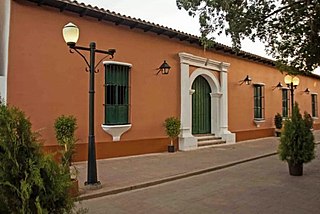 The "Casa de Oración Hebrea", mostly known as the Coro Synagogue, is a synagogue in the city of Santa Ana de Coro, Falcón, Venezuela, a city located near the Caribbean Sea coast and the Dutch island of Curaçao; it is known as one of the oldest synagogues in Latin America.

Asociación Bet-El is a Sephardi Orthodox synagogue in the city of Caracas that is affiliated to the Israelite Association of Venezuela. The synagogue was built between 1969 and 1973, with donations from Brazilian banker Edmond Safra, and is located in the Caracas neighborhood of San Bernardino. Currently, the community is made up mostly of Jews from Aleppo (Syria), Melilla (Spain) and northern Morocco, especially from the cities of Tetouan and Chefchaouen.

Plaza Venezuela is a public square located in Los Caobos neighborhood, Caracas, Venezuela. It was inaugurated in 1940 and is situated in the geographic center of Caracas.

On the morning of 18 November 2014, two Palestinian men from Jerusalem entered Kehilat Bnei Torah synagogue, in the Har Nof neighborhood of Jerusalem, and attacked the praying congregants with axes, knives, and a gun. They killed four dual-nationality worshippers, and critically wounded a responding Druze Israeli police officer, who later died of his wounds. They also injured seven male worshippers, one of whom never woke up from a coma and died 11 months later. The two attackers were then shot dead by the police.

El Recreo Shopping Mall is a large shopping mall in the commercial, financial, tourist and cultural district of Sabana Grande, Caracas, Venezuela. According to Top Shopping Centers magazine, the mall averaged three million visitors per month in 2013-2014. At 28 metres (92 ft) and seven floors below grade, it is Latin America's deepest construction and part of the late-1990s real-estate boom in Sabana Grande. El Recreo Shopping Mall was designed by Venezuelan architects Carlos Gómez de Llarena and Moisés Benacerraf. The shopping center's twin towers—the 125-metre (410 ft) Citibank and Movilnet Towers—are the tallest skyscrapers in the Venezuelan capital. The mall is connected to the Gran Meliá Caracas Hotel.

The El Paraíso stampede was a stampede of more than 500 people that occurred in the early-morning hours of 16 June 2018 at the El Paraíso Social Club, also known as Los Cotorros Club, in the El Paraíso urbanization in Caracas, Venezuela. The stampede was the result of a tear gas canister being detonated during a brawl among a group of students from different schools celebrating their proms. At least 19 people died, and according to official police reports, they were caused by asphyxia and polytrauma. 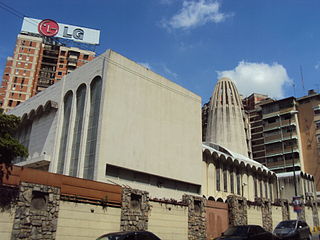 The Tiféret Israel Synagogue attack was the profanation of the synagogue, the oldest in Caracas, Venezuela in the night of 31 January 2009, during the shabbat. The attack occurred during the 2008–2009 Gaza War, after Venezuela severed diplomatic relations with Israel and that Israel expelled Venezuelan officials from the country.