Tifariti (Berber: Tifariti, Arabic : تيفاريتي) is an oasis town located in north-eastern Western Sahara, east of the Moroccan Berm, 138 km (86 mi) from Smara and 15 km (9 mi) north of the border with Mauritania. It is part of what Polisario Front calls the Liberated Territories and Morocco call the Buffer Zone. It has been the de facto temporary capital of the Sahrawi Arab Democratic Republic since the government moved there in 2008 from Bir Lehlou. It is the headquarters of the 2nd military region of the SADR.

It is also the name of a Daïra of the Wilaya of Smara, in the Sahrawi refugee camps.

In 2010, the population of Tifariti was estimated at around 3,000 persons.[ citation needed ]

Tifariti is located between Smara, the traditional spiritual centre of the Sahara founded by the Ma El Ainin (177 km (110 mi) away) [3] and the Algerian town of Tindouf (320 km (200 mi) away), where the Sahrawi refugee camps are located.

The government quarter of Tifariti houses the parliament of SADR, a hospital, a school, a mosque and a museum.[ citation needed ]

Primarily an encampment located near an oasis, it was always a kind of seasonal town for the Sahrawis, an Arabic-speaking Bedouin people controlling the area since medieval times. In 1912, a French Foreign Legion expedition commanded by Captain Gerard, who was trying to link with their troops in Morocco, was exterminated by Sahrawi rebel nomads near Tifariti. [4] Then, it was permanently settled and used by the Spanish authorities as an advanced desert military outpost. Now in reconstruction, it is estimated that Tifariti had a population of approximately 7,000 inhabitants in 1975. Its inhabitants largely abandoned the town in 1976 because of the war with Morocco. [5] Tifariti never had many fixed structures, due to the pastoral lifestyle of the Sahrawis. It is located in a rugged desert area, with little vegetation.

During the Western Sahara War

Tifariti was the place of several battles during the Western Sahara War (1975–1991) and served as a military base and stronghold for both sides at various points of the war. It was also used as a stopping place for Sahrawi refugees en route to Tindouf (Algeria) during the invasion phase (1975–76). Some sources claim that in January 1976 there were 15,000 Sahrawi refugees around the town. [6]

The village was briefly occupied by the Moroccan Army in February 1976, [7] but 2 months later it retreated, being reoccupied by the SPLA in March 1977. [4]

In the summer of 1977, Moroccan troops controlled again the town, this time for nearly two years. In March 1979, and after the Battle of Tifariti, the town was taken by the Polisario troops, the SPLA, [8]

During the 1980s, the Moroccan Wall was constructed north of Tifariti, and the terrain around the town was heavily mined. The risk is greatest east of the Berm, especially in the areas of Mehaires, Tifariti and Bir Lahlou where the Royal Moroccan Army (RMA) conducted offensive operations in August–September 1991. The dangerous result is, among others, scattered cluster bombs, still active in these areas. [9]

In August 1991, weeks before the proclamation of the ceasefire, the Royal Moroccan Air Force repeatedly bombed Tifariti, destroying the buildings and the wells, as well as killing dozens of civilians. [10] [11]

Hospitals and administrative buildings were built here between 1989 and 1991 by foreign aid agencies in preparation for a Sahrawi refugee return to Western Sahara, for the holding of a UN-backed referendum on either independence or integration with Morocco. That infrastructures were destroyed by the Royal Moroccan Air Force in August 1991, a few days before the proclamation of the cease-fire. [11] [12]

A United Nations airstrip and a base for the MINURSO's peace keeping forces is situated close to Tifariti. [13]

In April 1999, the "Navarra Hospital" was inaugurated. It was built up with the collaboration of solidarity associations from that Spanish autonomous community. [14] In January 2001, the patients and equipment of the hospital were evacuated, because of the threat of a restarting of the war. Finally, in February 2006, the hospital was re-opened. [15]

On February 27, 2007 (31st anniversary of the proclamation of the Sahrawi Arab Democratic Republic) a borough of 150 houses named "Solidarity neighbourhood" was inaugurated by SADR's president, Mohamed Abdelaziz. It was built with the help of the Andalusian provinces of Sevilla and Málaga. [17] On December 21, 2007, Abdelaziz inaugurated a mosque, in the framework of reconstruction and settlement of the Free Zone. [18]

On February 29, 2008, Abdelaziz launched the works of the building of the Mayoralty of Tifariti, a small dam to provide the local population with water [19] and the cornerstone of a sports complex, funded by South Africa.

On July 20, 2009, Salek Baba (SADR'S Minister of Reconstruction and Urbanization) visited Tifariti to assess the works of the "Tadamoun" and "Salam" neighbourhoods and a mini-desalination plant. [20] On October 30, 2009, Abdelkader Taleb Omar (Prime minister of the SADR) inaugurated a new district of 20 houses. He stated:

"The opening of these new residences is a portion of a large project of development in progress, includes other parts of the liberated territory of Meharrize, Bir Tighissit, Bir Lehlu, Mijek and Agounit".

In October 2003, the Polisario Front held its XI General Popular Congress here, electing officials to its executive National Secretariat, the exile parliament of the Sahrawi National Council, as well as reelecting (92%) Mohamed Abdelaziz as Secretary General, as has been the case since 1976. [22]

In December 2007, with the presence of 250 international delegates, the XII General Popular Congress of the POLISARIO was held again in Tifariti. Abdelaziz was reelected again (85%), [23] although he proposed to regulate alternation in the leadership of the Polisario Front. [24] Also, the members of the National Secretariat were elected. [25]

In February 2009, the town hosted the "International Conference on Urbanization and Reconstruction of Liberated Areas". [27] The participants signed the "Declaration of Tifariti", with three principal aims:

Since 2007, Tifariti has been the scenery of "ARTifariti", an annual international encounter of artists from several countries. The art pieces are made in the town and remain there, in the museum of Tifariti or outdoors. On 27 February 2011 Tifariti hosted the 35th anniversary of the proclamation of the Saharawi Arab Democratic Republic. [29] [30]

On the 2012 edition, ARTifariti moved its activities to the Sahrawi refugee camps in Tindouf, Algeria.

Approximately 30 km (20 mi) to the northeast of Tifariti is the Erqueyez Archaeological Park. This archaeological site, without precedents in this area, provides an interesting lithic manufacturing works from the Late Paleolithic or Epipaleolithic, mound graves, and more than a hundred caves with rock paintings. [31]

On 9 February 2013, Sahara Press Service announced that Mohamed Abdelaziz had released on 23 December 2012 a presidential decree establishing the first Sahrawi university, named "University of Tifariti". The President of the SADR also appointed Khatari Ahmudi Abdallahi as the head of the new educational institution. [32]

Since 2009, Tifariti is the finish line of the "Sahara Bike Race", a 300 km (190 mi) route in parallel with the Moroccan Wall, that starts in the Wilaya of El Aaiún, in the Sahrawi refugee camps. [33] 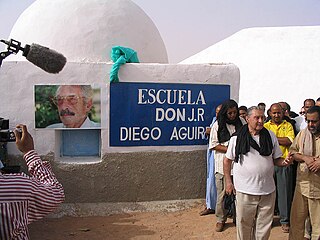 Bir Lehlou is an oasis town in north-eastern Western Sahara, 236 km from Smara, near the Mauritanian border and east of the border wall, in Polisario Front-held territory. It has a pharmacy, a school and a mosque. It is the head of the 5th military region of the Sahrawi Arab Democratic Republic and was the factual temporary capital of SADR until Tifariti became the temporary capital in 2008. It is also the name of a Daïra of the Wilaya of Smara, in the Sahrawi refugee camps.

Mahfoud Ali Beiba Hammad Dueihi was a Sahrawi politician and co-founder of the Polisario Front, a national liberation movement that seeks self-determination for Western Sahara. From 1975 until his death, he lived in an exile in the refugee camps of Tindouf, Algeria.

The Free Zone or Liberated Territories is a term used by the Polisario Front government of the Sahrawi Arab Democratic Republic, a partially recognized de facto sovereign state in the western Maghreb, to describe the part of Western Sahara that lies to the east of a 2,200-kilometre (1,400 mi) border wall flanked by a minefield, often referred as the Berm, and to the west and north of the borders with Algeria and Mauritania, respectively. It is controlled by the Sahrawi Arab Democratic Republic, as opposed to the area to the west of the Berm, which is controlled by Morocco as part of its Southern Provinces. Both states claim the entirety of Western Sahara as their territory.

Agounit is a small town or village in the Río de Oro area of the disputed territory of Western Sahara. It is situated in the in the Polisario Front-held Free Zone of Western Sahara, under the jurisdiction of the Sahrawi Arab Democratic Republic, and near the Mauritanian border, 72 km. south-west from Fderik. It is claimed by Morocco as a rural commune in the Aousserd Province in the region of Dakhla-Oued Ed-Dahab. At the time of the 2004 census, the commune had a total population of 222 people living in 43 households. It has a hospital, a school and a mosque. It is the head of the 7th military region of the Sahrawi Arab Democratic Republic.

The foreign relations of the Sahrawi Arab Democratic Republic (SADR) are conducted by the Polisario Front, which maintains a network of representation offices and embassies in foreign countries.

Sahara Press Service (SPS) is the multi-lingual official press agency of the Sahrawi Arab Democratic Republic, the government in exile of the Western Sahara. The agency mainly report government-related news and current Sahrawi affairs, both from the liberated territories, the occupied territories and the Sahrawi refugee camps in Tindouf, Algeria.

The Western Sahara War was an armed struggle between the Sahrawi indigenous Polisario Front and Morocco from 1975 to 1991, being the most significant phase of the Western Sahara conflict. The conflict erupted after the withdrawal of Spain from the Spanish Sahara in accordance with the Madrid Accords, by which it transferred administrative control of the territory to Morocco and Mauritania, but not sovereignty. In late 1975, the Moroccan government organized the Green March of some 350,000 Moroccan citizens, escorted by around 20,000 troops, who entered Western Sahara, trying to establish a Moroccan presence. While at first met with just minor resistance by the Polisario Front, Morocco later engaged a long period of guerrilla warfare with the Sahrawi nationalists. During the late 1970s, the Polisario Front, desiring to establish an independent state in the territory, attempted to fight both Mauritania and Morocco. In 1979, Mauritania withdrew from the conflict after signing a peace treaty with the Polisario Front. The war continued in low intensity throughout the 1980s, though Morocco made several attempts to take the upper hand in 1989–1991. A cease-fire agreement was finally reached between the Polisario Front and Morocco in September 1991. Some sources put the final death toll between 10,000 and 20,000 people.

Meharrize is an oasis located in Western Sahara. It is situated between Tifariti and Amgala, 93 km from Smara, to the east of the Moroccan Wall, and in the Polisario Front-held part of Western Sahara close to the Mauritanian border. It has a dispensary, a school, and a mosque. Also, it is the head of the 4th military region of the Sahrawi Arab Democratic Republic.

Mijek is a small town in the Río de Oro region of Western Sahara. It is located east of the Moroccan Wall, in the Liberated Territories, 80 km north of the Mauritanian town of Zouérat and 250 km. east of Dakhla. It has a hospital, and reportedly a school will be opened during the 2012–2013 academic year. It is the head of the 3rd military region of the Sahrawi Arab Democratic Republic. 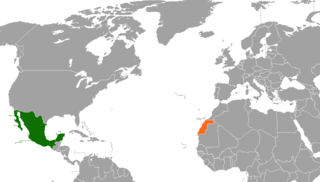 Mexico–Sahrawi Republic relations are the current and historical relations between Mexico and the Sahrawi Arab Democratic Republic (SADR). Mexico recognized the SADR on 8 September 1979.

The Sahrawi Arab Democratic Republic, also known as Western Sahara, is a partially recognized state, recognised by 41 UN member states, located in the western Maghreb, which claims the non-self-governing territory of Western Sahara, but controls only the easternmost one-fifth of that territory. Between 1884 and 1975, Western Sahara was known as Spanish Sahara, a Spanish colony. The SADR is one of the two African states in which Spanish is a significant language, the other being Equatorial Guinea.