Hacienda Heights is an unincorporated suburban community and census-designated place in Los Angeles County, California, United States. As of the 2010 census, the community had a total population of 54,038, up from 53,122 at the 2000 census. Hacienda Heights is the second largest census designated place in Los Angeles County by area and the county's second largest CDP by population.

Light heavyweight, or junior cruiserweight, is a weight class in combat sports.

Ward competed in the 2010 USA Boxing National Championships, and was the bronze medallist.

Vonda Ward is an American female boxer who was also a well known NCAA basketball player.

The International Boxing Association or AIBA, originally the Association Internationale de Boxe Amateur, is a sport organization that sanctions amateur (Olympic-style) boxing matches and awards world and subordinate championships. Recently, AIBA has been trying to build its own semi-professional version of boxing, where boxers would retain their Olympic eligibility, through the team tournament league known as World Series of Boxing and AIBA Pro Boxing.

The Air Force Falcons are the athletic teams that represent the United States Air Force Academy. The intercollegiate program has 17 men's and 10 women's NCAA-sanctioned teams. The current interim athletic director is Col. Jennifer Block. The majority of the Falcons teams compete as members of the Mountain West Conference.

Jordan Shimmell is an American amateur heavyweight boxer best known to win the National Golden Gloves and the US Champion at 201 lbs in 2009.

José Pedraza González is a Puerto Rican professional boxer in the lightweight division. He had held the IBF super featherweight title from June 2015 to January 2017. As an amateur he represented Puerto Rico, winning medals in multiple international competitions. Among the awards achieved by Pedraza are a bronze medal at the 2007 Pan American Games, silver at the 2009 World Amateur Boxing Championships and gold at the 2010 Central American and Caribbean Games, as well as participation in the 2008 Summer Olympics. Pedraza debuted as a professional in February 2011, winning the World Boxing Council's Super Featherweight Youth World Championship in only his sixth fight.

Jordyn Marie Wieber is an American former artistic gymnast turned gymnastics coach who is the current head coach of the Arkansas Razorbacks gymnastics team, assuming the position in April 2019 following the retirement of long-time head coach, Mark Cook. She was a member of the U.S. Women's Gymnastics team, dubbed the Fierce Five by the media, at the 2012 Summer Olympics, where she won a gold medal in the team competition. She was also a member of the gold-winning American team at the 2011 World Championships, where she also won the individual all-around.

Robert "Bravo" Brant is a middleweight professional boxer from Oakdale, Minnesota. He is the current WBA middleweight champion.

Vikas Krishan Yadav is an Indian male boxer from Bhiwani district in Haryana, who won a gold medal in the 2010 Asian Games in the Lightweight category and a gold medal at the 2018 Commonwealth Games

George Michael Ward Jr., often known by his nickname of "Irish" Micky Ward, is an American former professional boxer who competed from 1985 to 2003. He challenged once for the IBF light welterweight title in 1997, and held the WBU light welterweight title in 2000. Ward is widely known for his trilogy of fights with Arturo Gatti, two of which received Fight of the Year awards by The Ring magazine, as well as his relentless pressure fighting style. In the 2010 film The Fighter, based on his early career, Ward was portrayed by Mark Wahlberg.

Calvin Smith Jr. is an American athlete who specialises in the 200m and 400m. He is the son of former world record-holder, world champion, Olympic medalist and National Track & Field Hall of Famer, Calvin Smith Sr. He is an All-American for University of Florida. He’s earned 18 All-America titles,the most in University of Florida track and field history. He was also a part of the 2010 NCAA indoor national championship team and was an alternate in the 2008 Beijing Olympic Games on the United States 4x400 relay although he did not compete.

Terrell Gausha is a professional boxer, he represented the United States at the 2012 Summer Olympics and challenged for the WBA (Super) light middleweight title in 2017.

Joseph Pedroza Diaz Jr. from South El Monte, California is an American boxer who competed in the 2012 Olympics as a bantamweight and is the current NABF Featherweight Champion. 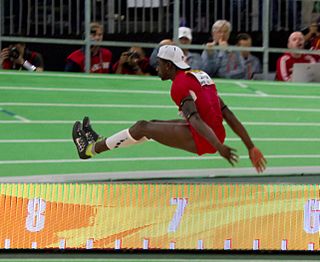 Marquis Dendy is an American track and field athlete, primarily known for horizontal jumping events. He is the 2015 National Champion in the Long Jump. His winning jump, of 8.68 m, though wind aided at +3.7mps, his first jump of the competition, was the longest jump in the world under any conditions in over 5 years. He grew up in Middletown, Delaware.

Jared Ward is an American long distance runner. He qualified for the 2016 Summer Olympics when he placed third in the marathon at the 2016 U.S. Olympic Trials. He finished sixth at the 2016 Olympics.

Anthony Campbell is an amateur boxer from the United States.