Tiga guérisseur is a 2001 Burkinabé film.

Tiga is in his thirties and tries out different jobs but finds them to be too exhausting or grubby. He has the idea of becoming a healer. Certain that he will become rich easily, Tiga invents his own magic potions. All goes well until the day a suspicious woman makes him drink his own potion first. 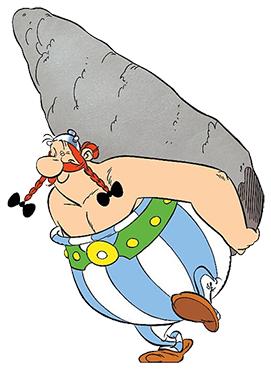 Obelix is a cartoon character in the French comic book series Asterix. He works as a menhir sculptor and deliveryman, and is Asterix's best friend. Obelix is noted for his fatness, the menhirs he carries around on his back and his superhuman strength. He fell into a cauldron of the Gauls' magic potion when he was a baby, causing him to be the only Gaul in Asterix's village who is in a permanent state of superhuman strength. Because of this already enormous strength, Obelix is not allowed to drink the magic potion ever again, a ban he regards as being tremendously unfair. Other characteristics are his simplemindedness, his love and care for his dog Dogmatix, his anger when someone refers to him as being "fat", his enthusiasm for hunting and eating wild boars, and beating up Romans. His catchphrase is: "Ils sont fous ces romains", which translates into "These Romans are crazy!", although he considers nearly every other nationality to be just as strange. 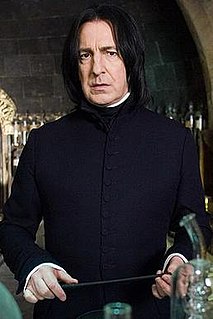 Severus Snape is a fictional character in J. K. Rowling's Harry Potter series. He is an exceptionally skilful wizard whose coldly sarcastic and controlled exterior conceals deep emotions and anguish. A Professor at Hogwarts School of Witchcraft and Wizardry, Snape is hostile to Harry due to his resemblance to his father James, who bullied Snape during their time at Hogwarts.

Trick or Treat is a 1952 animated short film produced by Walt Disney Productions and released by RKO Radio Pictures. The cartoon, which takes place on Halloween night, follows a series of pranks between Donald Duck and his nephews with Witch Hazel. The film was directed by Jack Hannah and features the voices of Clarence Nash as Donald and his nephews, and June Foray as Hazel. The film introduced the song "Trick or Treat for Halloween" which was written by Mack David, Al Hoffman, and Jerry Livingston and performed by The Mellomen.

Asterix and Cleopatra is the sixth book in the Asterix album series by René Goscinny and Albert Uderzo. It was first published in serial form in Pilote magazine, issues 215–257, in 1963. 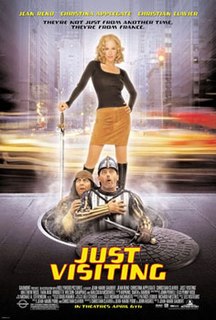 Just Visiting is a 2001 comedy film that is an American remake of the French film Les Visiteurs. It stars Jean Reno, Christina Applegate, Christian Clavier, Malcolm McDowell, Tara Reid, and Bridgette Wilson. It is about a medieval knight and his serf who travel to 21st-century Chicago, meeting the knight's descendant.

Asterix and the Big Fight is a 1989 French-German animated film directed by Philippe Grimond and produced by Yannick Piel. It is based on the Asterix comic book series. The film has a different plot from the book of the same name. It combines plot elements from Asterix and the Big Fight and Asterix and the Soothsayer. Although there is plenty of fighting — as usual for an Asterix story — the actual fight that the story is named for is not part of the movie's plot. The novelization was titled "Operation Getafix".

Asterix the Gaul is a 1967 Belgian/French animated film, based on the comic book of the same name, which was the first book in the highly popular comic series Asterix by René Goscinny and Albert Uderzo. The film closely follows the book's plot.

Asterix Conquers America is a 1994 French and German animated film produced by Jürgen Wohlrabe and Gerhard Hahn, the latter of whom also directed it. It was produced in Germany, under the title of Asterix in Amerika, and is the first Asterix film to be produced outside France, which refers to it as Astérix et les Indiens. The movie's plot is loosely adapted from the comic Asterix and the Great Crossing, with a number of changes to it. While the film was distributed in Germany by Jugendfilm, 20th Century Fox handled its distribution in France and the United Kingdom. As of 2019, this film has yet to be officially released in the United States or Canada.

Asterix in Britain is a Danish/French animated film released in 1986; the fifth Asterix feature film, and the last from Dargaud Films. It is based on the book of the same name. The theme song The Lookout is Out was performed by Cook da Books and was based on Plastic Bertrand's "Astérix est là" but with a slower tempo, played with acoustic guitars and brand new English lyrics.

Asterix and Obelix vs. Caesar is a 1999 feature film directed by Claude Zidi, the first of what went on to become a series of live-action films based on Goscinny and Uderzo's Astérix comics. The film combines plots of several Astérix stories, mostly Asterix the Gaul, Asterix and the Soothsayer, Asterix and the Goths, Asterix the Legionary and Asterix the Gladiator but jokes and references from many other albums abound, including a humorous exchange between Caesar and Brutus taken from Asterix and Cleopatra, and the villain Lucius Detritus is based on Tullius Detritus, the main antagonist of Asterix and the Roman Agent.

Ultraman Gaia: The Battle in Hyperspace is a 1999 Japanese superhero kaiju tokusatsu film produced by Tsuburaya Productions. It is a sequel to the previous year's Ultraman Tiga & Ultraman Dyna: Warriors of the Star of Light and became second in a successful Ultra Series. This film is the only theatrical spinoff of the Ultraman Gaia TV series.

Ultraman Tiga & Ultraman Dyna: Warriors of the Star of Light is a tokusatsu, superhero, kaiju, and eiga produced by Tsuburaya Productions in 1998. This film is the only theatrical spinoff of the Ultraman Dyna TV series.

Potions is one of the curriculum subjects at Hogwarts in the Harry Potter series. Throughout the series, they are mentioned in potions class at Hogwarts, taught by Severus Snape in books one to five and Horace Slughorn in books six and seven.

Ivory Tower is a 2010 Canadian feature film and the directorial debut of Adam Traynor, a musician from the German-based hip-hop group Puppetmastaz. The film was co-written by Canadian pianist and rapper Gonzales and French director and screenwriter Céline Sciamma. It is slated for a theatrical release in the Fall of 2010, and stars a variety of Canadian-born musicians, including Gonzales himself, Peaches, Feist and Tiga. Additionally, Gonzales' father appears in the film.

Tiga Dara is a 1956 Indonesian-language musical comedy film starring Chitra Dewi, Mieke Wijaya, and Indriati Iskak. Directed by Usmar Ismail for Perfini, the film follows three sisters who live with their father and grandmother. When the eldest sister, Nunung, shows no interest in marrying, her family tries unsuccessfully to find a husband for her. Nunung initially rejects the advances of a young man named Toto, who instead dates her younger sister. However, when he becomes jealous and travels from Jakarta to Bandung to profess his love, she agrees to marry him.

Ultraman Tiga is a fictional superhero from the 1996 Ultra Series, Ultraman Tiga, which ended a 15 year long hiatus of the serial television Ultra Series, with the last one being Ultraman 80, whose final episode was in 1981. In the series, the titular character's body bonded with Daigo Madoka, a man who was a descendant of Super Ancient Civilization to fight against monstrous threats during the series' course. Tiga's case is regarded as a "human Ultraman", due to his host Daigo controlling his body instead of Tiga being in control of himself. Following the destruction of the dark ruler Gatanothor, Daigo lost his ability to transform into Tiga, signifying that the ancient warrior's role on Earth was over. His own movie The Final Odyssey further revealed his backstory as an incredibly powerful evil Ultraman in the past known by the name Tiga Dark until he defected to the light after falling in love with a human named Yuzare. 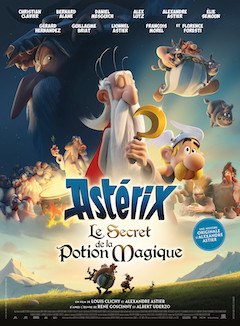 Asterix: The Secret of the Magic Potion is a 2018 French computer-animated adventure family comedy film co-directed by Alexandre Astier and Louis Clichy. The screenplay by Astier is based on the Asterix comic book characters created by René Goscinny and Albert Uderzo.