Tigam Alif Farisma [1] (born on August 6, 1992) is an Indonesian footballer who currently plays for Mitra Kukar F.C. in the Indonesia Super League.

The Arabic alphabet, or Arabic abjad, is the Arabic script as it is codified for writing Arabic. It is written from right to left in a cursive style and includes 28 letters. Most letters have contextual letterforms.

Abbottabad is the capital city of Abbottabad District in the Hazara region of eastern Khyber Pakhtunkhwa, Pakistan. It is the 40th largest city in Pakistan and sixth largest in the province of Khyber Pakhtunkhwa by population. It is about 120 km (75 mi) north of Islamabad-Rawalpindi and 150 km (93 mi) east of Peshawar, at an altitude of 1,256 m (4,121 ft). Kashmir lies to the east.

An Ayah is a "verse" in the Islamic Quran, one of the statements of varying length that make up the chapters (surah) of the Quran and are marked by a number. In the Quranic context the word means "evidence," "sign" or "miracle," and in Islam may refer to things other than Quranic verses, such as religious obligations or cosmic phenomena. In the Quran it is referred to in several verses such as:

DIN 31635 is a Deutsches Institut für Normung (DIN) standard for the transliteration of the Arabic alphabet adopted in 1982. It is based on the rules of the Deutsche Morgenländische Gesellschaft (DMG) as modified by the International Orientalist Congress 1935 in Rome. The most important differences from English-based systems were doing away with j, because it stood for in the English-speaking world and for in the German-speaking world and the entire absence of digraphs like th, dh, kh, gh, sh. Its acceptance relies less on its official status than on its elegance and the Geschichte der arabischen Literatur manuscript catalogue of Carl Brockelmann and the dictionary of Hans Wehr. Today it is used in most German-language publications of Arabic and Islamic studies. 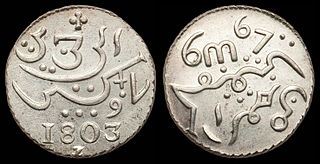 Jawi is a writing system used for writing the Malay language and several other languages of Southeast Asia, such as Acehnese, Banjarese, Kerinci, Minangkabau and Tausūg. Jawi is based on the Arabic script, consisting of the original 28 Arabic letters, and six additional letters constructed to fit the phonemes native to Malay but not found in Classical Arabic, which are.

Yodh is the tenth letter of the Semitic abjads, including Phoenician Yōd /𐤉, Hebrew Yōd י, Aramaic Yodh , Syriac Yōḏ ܝ, and Arabic Yāʾ ي. Its sound value is in all languages for which it is used; in many languages, it also serves as a long vowel, representing.

Alif may refer to:

Dhangethi is one of the inhabited islands of Alif Dhaal Atoll. 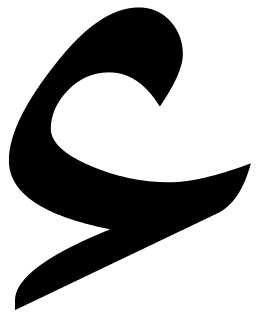 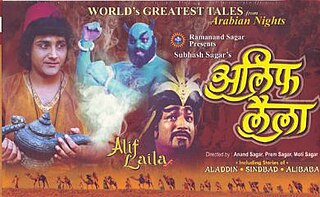 Alif Laila is an Indian television series based on the One Thousand and One Nights, also known as the Arabian Nights. It was produced by Sagar Arts. It was made in two seasons. The series from 1993 to 1997 for 143 episodes on DD National.

Sultan of Ternate Mosque, also known as the Old Mosque of Ternate, is an old mosque in Ternate City, Indonesia. It is the largest mosque in the city and the royal mosque of the Ternate Sultanate.

Alif Allah Aur Insaan is a Pakistani Sufi spiritual drama series which aired on Hum TV from 25 April 2017 to 13 February 2018. It was produced by Momina Duraid, as part of a night programming all under Duraid's MD Productions and was written by Qaisra Hayat, based on her novel of the same name. The series was directed by Ahson Talish. It was also telecast on state channel PTV Home from August 2019 through 2020.

Alif is a 2019 Pakistani spiritual-romantic TV series created by Sana Shahnawaz and Samina Humayun Saeed under their newly formed production house Epic Entertainment. It was written by Umera Ahmad based on her novel of same name and directed by Haseeb Hassan. It starred Hamza Ali Abbasi, Sajal Aly, Kubra Khan and Ahsan Khan in leading roles.