Tiger-head shoes (Chinese :虎头鞋) are an example of traditional Chinese folk handicraft used as footwear for children. Their name comes from the toe cap, which looks like the head of a tiger. In the North of China, people also call them cat-head shoes. In Chinese culture, tigers are regarded as auspicious; people embroider the head and the upper of the shoes with tiger or tiger-head patterns, in the hope that their children will become as robust and dynamic as tigers. Also, the vivid image of tiger-head pattern was thought to expel evil spirits to protect their children from diseases and disasters. It is a complicated work to make tiger-head shoes, there are many delicate stitch work such as embroidery, or weaving simply on the head of the shoes. The vamp (upper part of the shoe) is mainly coloured in red and yellow, and residents[ which? ] usually use thick lines to draw the outline of the mouth, eyebrow, nose and the eyes of the tiger to express its power in an exaggerated way. [1] [2]

Long long ago, there was a lady who has clever hands and good sense. She was very gifted in embroidery, so that her child was always well dressed. One night, a monster came to the village and caught all the children there except her son. From then people began to realize that the shoes the child wearing were decorated with a tiger’s head at the front which scared the monster, thus leaving the child safe. Therefore, people began to imitate this practice. [4]

In Chinese culture, the tiger is seen as sturdy and mighty with the title of “king of the beasts”. Thus, when it is mentioned, people will naturally feel a sense of power and fright. As a result, the expressions concerning tiger, such as the tiger's roar (Chinese: 虎啸, Pinyin: huxiao), its frightful appearance (Chinese: 虎威, Pinyin: huwei), and the phrase "vigorous as a tiger" (Chinese: 虎虎有生气, Pinyin: huhuyoushengqi) came into being, along with worship of the creature.

When a child is growing up, he would come across a series of accidents or even calamities caused by nature or society. These accidents and calamities need to be conquered, so that the child can grow up healthily. Therefore, he is expected to become burly, dignified, and vigorous like a tiger, and possess all the inner qualities of a tiger as well. One major embodiment of this hope is to embroider the patterns of a tiger's heads on shoe toes and uppers. [9]

In other words, tiger or tiger-head patterns are used to exorcise evil spirits and accelerate the "tigerous temperament" of a child.

China National Highway 212 (G212) runs from Lanzhou in Gansu to Chongqing. It was originally 1302 kilometres in length. In the 2013 National Highway Network Planning it was extended to Longbang, Guangxi, on the border with Vietnam. After the extension, the length is circa 2,300 km (1,400 mi).

Wen County or Wenxian is a county under the administration of the prefecture-level city of Longnan, in the southeast of Gansu province, China, bordering Sichuan province to the south and west. It has a land area of 4,994 square kilometers, and a population of 241,000 (2019), notably having the largest population of Baima people.

Maiji District is a district of the prefecture-level city of Tianshui in the southeast of Gansu Province, China, bordering Shaanxi Province to the east. It is best known for, and named after, the Maijishan Grottoes. Before 2005 it was called Beidao District.

Qiu County or Qiuxian is a county in the south of Hebei province, China. It is under the administration of Handan City.

Dagang is a town in Yandu District, Yancheng, Jiangsu Province, China. Founded during the Neolithic Age, Dagang was named after a huge sandy hill. 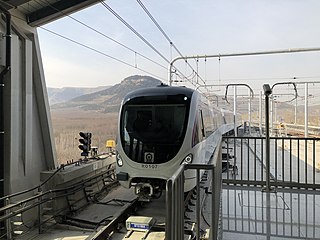 Wang Qiang was a Chinese serial killer from Budayuan Town, Kuandian Manchu Autonomous County, Liaoning, China and one of the most notorious murderers and rapists in Chinese history.

Zoo Holdings Group is a food and beverage management company headquartered in Shanghai, China, and has its offices in mainland China, Taiwan and South Korea. Its founder, Kim Kun Woo, has also created product lines such as Zoo Coffee, Tiger Topoki, and Monkey's Kitchen. 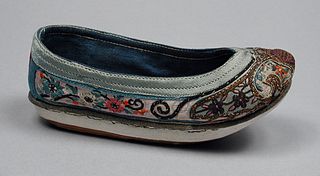 Xiuhuaxie, also known as Chinese shoes, Chinese-style embroidered shoes, and Chinese slippers, are a well-known sub-type of traditional Chinese cloth shoes ; the xiuhuaxie are deeply rooted in Chinese culture and are characterized by its use of elaborate and colourful Chinese embroideries to create pattern on the shoes. The traditional handicraft of making xiuhuaxie is fully indigenous to China, having been created by Chinese people since the ancient times, and combines Chinese shoe culture and the art of Chinese embroidery. This craft is believed to have originated during the Spring and Autumn period about 2600 years ago in Shanxi province; the traditional craft was then handed down from generation to generation by Chinese women. Nowadays, the xiuhuaxie continue to be used as a type of footwear item in Hanfu, and are also used as traditional Chinese wedding shoes. Ethnic minorities in China also have their own styles of xiuhuaxie and their own traditional customs around these shoes.