Last updated May 31, 2020
This article is about the British comic magazine. For the American comic strip, see Tiger (comic strip).

The comic was launched under the editorship of Derek Birnage [1] on 11 September 1954, [2] under the name Tiger – The Sport and Adventure Picture Story Weekly, [3] and featured predominantly sporting strips. Its most popular strip was "Roy of the Rovers," a football-based strip recounting the life of Roy Race and the team he played for, Melchester Rovers. This strip proved so successful it was spun out of Tiger and into its own comic. [4]

The next editor was Barrie Tomlinson. Barrie became Group Editor in 1976, with Paul Gettens as editor. Following successive mergers with other Fleetway publications in the 1960s the comic was known as Tiger and Hurricane, then Tiger and Jag, then it was coupled with the football magazine Scorcher in 1974, resulting in Tiger and Scorcher appearing for more than 6 years. Later there was a further, less successful, merger with another comic called Speed, in 1980.

This list is incomplete. You can help to complete it.

In addition, sports stars such as Tony Greig, Geoff Boycott, Trevor Francis, Ian Botham and Charlie Nicholas wrote columns for Tiger. Also many TV stars such as Morecambe and Wise appeared in Christmas issues, usually dressed up as Santa Claus.

Roy of the Rovers is a British comic strip about the life and times of a fictional footballer and later manager named Roy Race, who played for Melchester Rovers. The strip first appeared in the Tiger in 1954, before giving its name to a weekly comic, published by IPC and Fleetway from 1976 until 1995, in which it was the main feature.

Battle Picture Weekly, at various times also known as Battle Action, Battle Action Force, Battle and Battle with Storm Force, was a British war comic book magazine published by IPC Magazines from 8 March 1975 to 23 January 1988, when it merged with the new incarnation of Eagle. Most stories were set in World War II, with some based on other conflicts.

Scream! was a British weekly horror comic anthology that was published for 15 issues by IPC Magazines in 1984.

Tom Tully was a noted British comic writer mostly of sports and action stories. He is probably most famous as the longest-running writer of the popular football-themed strip Roy of the Rovers, which he wrote for much of Roy Race's playing career until the weekly comic closed in 1993.

Billy's Boots was a popular British comic strip by writer Fred Baker and artist John Gillatt, later continued by Mike Western. The original Billy's Boots was an earlier humorous series, written and drawn by Frank Purcell, which appeared in Tiger between 1961 and 1963, with a similar premise to this later series. The later more serious Billy appeared in the first issue of Scorcher in 1970, and later moved to Tiger when the two comics merged in 1974. In 1985 Tiger in turn merged with Eagle and the strip moved again, however just a year later Billy's adventures relocated once more, this time to Roy of the Rovers. New adventures were included in the weekly comic until May 1990, before he switched to Best of Roy of the Rovers Monthly. The strip also appeared in annuals, including annuals for comics which had themselves ceased publication, and is still fondly remembered by fans of the "golden age" of British boys' comics. In Finland and Sweden, Billy's Boots was published in Buster magazine. In the UK, stories based on Billy's earliest adventures appeared in Total Football magazine until it closed in 2001, and Billy's story was also reprinted for a few months in the defunct Striker comic.

Scorcher was the name of a football-themed British comic magazine published by IPC between January 1970 and June 1971. In July 1971, it joined with another football-themed comic, Score, to form Scorcher and SCORE, before finally merging into Tiger to become TIGER and Scorcher. The word Scorcher started with almost equal prominence to TIGER on the title page, but as usually happens with such mergers the title size was reduced in November 1975, and again in February 1978 before finally being dropped from the title of the comic after the issue dated 30 August 1980. Scorcher featured various well-known comic strips, such as Billy's Boots, Bobby of the Blues and Lags Eleven, a story about a prison football team. In addition, the Nipper story was absorbed from Score comic and Hot Shot Hamish made its first appearance in the Scorcher and SCORE period. Some of these stories later found homes in Roy of the Rovers in addition to Tiger.

Hot Shot Hamish and Mighty Mouse were two popular British football-themed comic strips, which later merged, and which appeared in various publications from the 1970s to the 1990s. Both are amongst the best remembered football characters from the "golden age" of British boys' comics. 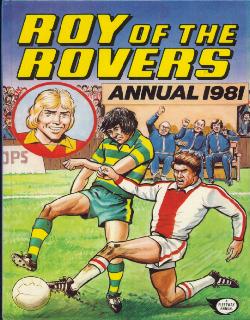 Johnny Dexter was a fictional footballer who appeared in three different comic strips in the British boys' comic Roy of the Rovers during the 1970s, 80s and 90s. He was a defender, playing centre-back for Danefield United and England and usually left-back for Melchester Rovers. He was amongst the most popular characters in the comic, being the only one other than Roy himself ever to appear on the cover of one of the comic's annuals, and is still fondly remembered by fans of the "golden age" of British sports-themed comics.

This is a list of Dalek comic strips, illustrated annuals and graphic novels. Cameo appearances and reprints are only covered if notable.

The Roy of the Rovers comic magazine was launched as a weekly on 25 September 1976, named after the established comic strip of the same name that first appeared as weekly feature in the Tiger on 11 September 1954. The title ran for 853 issues, until 20 March 1993, and included other football strips and features. In February 1989, the magazine merged with the similarly themed Hot Shot, and was known for a brief time as Roy of the Rovers and Hot Shot, but reverted to its original title shortly afterwards. 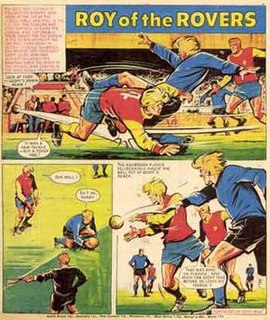 Yvonne Hutton was a British comics artist best known for her work on football series Roy of the Rovers. 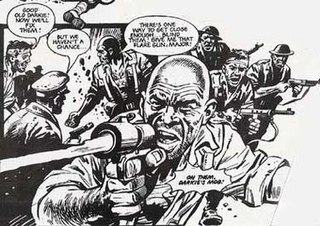 Mike Western was a British comics artist. He worked as a clean-up artist for GB Animation after military service in the Second World War, and later at Halas and Batchelor on their 1954 film adaptation of Animal Farm. In the early 1950s he joined fellow former GB Animation artists Ron "Nobby" Clark and Eric Bradbury at Amalgamated Press, drawing adventure strips for Knock-Out, including the western "Lucky Logan" and the aviation series "Johnnie Wingco".

Derek Arthur William Birnage was a British comics editor and writer and newspaper editor, best known as the founding editor of the weekly sports comic Tiger and as a writer of Roy of the Rovers.

Frank Stuart Pepper was a British writer of comics and story papers for Amalgamated Press, best known as the creator of "Roy of the Rovers" and "Captain Condor".

Rob Davis is a British comics artist, writer, and editorial illustrator located in Blandford Forum, Dorset. British comics magazines and features to which he has contributed include Roy of the Rovers, Judge Dredd, Doctor Who Magazine and Doctor Who Adventures. He has also created the graphic novels Don Quixote and an original story, The Motherless Oven. 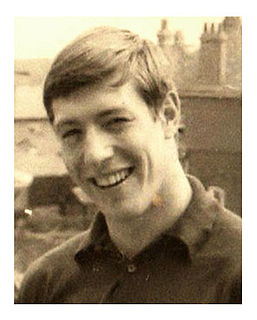 Anthony John "Tony" Harding was a British illustrator of boys' action comics specialising in football stories. He worked for D. C. Thomson & Co. and IPC Magazines in a career that spanned over 30 years, on comics such as Bullet, Scorcher, Hornet, Action, Roy of the Rovers, Victor and Scoop, amongst others.

Wildcat was a short-lived British comic which ran fortnightly from 1988 to 1989. It was a science fiction comic about colonists fleeing Earth in a spaceship called Wildcat just before the planet is destroyed in the year 2500. It featured five stories in each issue: one continuing series for each of the four main characters as they explore an alien planet to see if it is fit for habitation, and a fifth story set onboard the ship, which was a single-episode story each week.

Barrie Tomlinson was an editor and writer of British comics in the 1970s and '80s.