The Tiger Bowl is an annual college football bowl game played in South Korea. The game is the championship game for the Korean American Football Association's college programs. [1] [2]

In North America, a bowl game is one of a number of post-season college football games that are primarily played by teams belonging to the NCAA's Division I Football Bowl Subdivision (FBS). For most of its history, the Division I Bowl Subdivision had avoided using a playoff tournament to determine an annual national champion, which was instead traditionally determined by a vote of sports writers and other non-players. In place of such a playoff, various cities across the United States developed their own regional festivals featuring post-season college football games. Prior to 2002, bowl game statistics were not included in players' career totals and the games were mostly considered to be exhibition games involving a payout to participating teams. Despite attempts to establish a permanent system to determine the FBS national champion on the field, various bowl games continue to be held because of the vested economic interests entrenched in them. 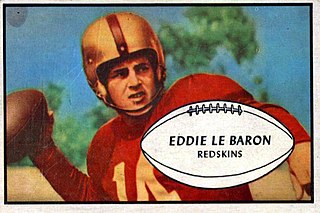 Edward Wayne LeBaron Jr. was an American football quarterback in the National Football League (NFL) for the Washington Redskins and Dallas Cowboys. He played college football at the College of the Pacific. He also was an executive vice president of the Atlanta Falcons.

Thomas Henry Casanova III is a former American football player and politician. He played professionally in the National Football League (NFL) for the Cincinnati Bengals for six seasons and was invited to three Pro Bowls, as well as an All-Pro in 1976. He played college football at Louisiana State University, where he was a three-time first-team All-American. He is a Republican former member of the Louisiana State Senate, having served a single term from 1996 to 2000.

The Ole Miss Rebels football program represents the University of Mississippi, also known as "Ole Miss.” The Rebels compete in the Football Bowl Subdivision (FBS) of the National Collegiate Athletic Association (NCAA) and the Western Division of the Southeastern Conference (SEC). The football history of Ole Miss includes the formation of the first football team in the state and the 26th team on the list of college football's all-time winning programs. The Rebels posted their 600th win on September 27, 2008, when they defeated the Florida Gators 31–30.

The Clemson Tigers, known traditionally as the "Clemson University Fighting Tigers", represent Clemson University in the sport of American football. The Tigers compete in the Football Bowl Subdivision (FBS) of the National Collegiate Athletic Association (NCAA) and the Atlantic Division of the Atlantic Coast Conference (ACC). Consistently ranked among the most elite college football programs in the United States, the team is known for its storied history, distinctive helmet, fight song and colors as well as the many traditions associated with the school.

The Korea American Football Association has existed in South Korea for more than 20 years. The popularity of American football in Korea has been historically low, but with the visit of Hines Ward in 2006, the sport received a modest level of increased appeal. Within Korea, KAFA is a sports governing body over both traditional football with pads and also flag football.

James Banks McFadden was an American football and basketball player and coach. McFadden is best known for his association with Clemson University, where he spent 43 years as a player, coach, and administrator. He was elected to the College Football Hall of Fame in 1959. 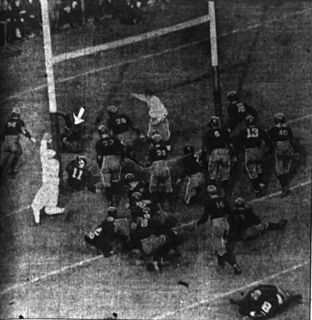 The 1965 Arkansas Razorbacks football team represented the University of Arkansas in the Southwest Conference (SWC) during the 1965 college football season. In their eighth year under head coach Frank Broyles, the Razorbacks compiled a 10–1 record, won the SWC championship, and outscored all opponents by a combined total of 331 to 118. The Razorbacks were undefeated in the regular season and ranked #3 in the final AP Poll and #2 in the final UPI Coaches Poll. They went on to lose to LSU in the 1966 Cotton Bowl Classic by a 14–7 score. 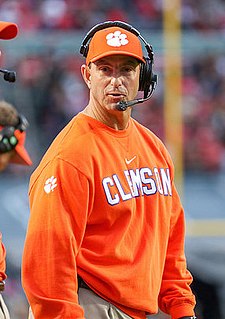 William Christopher "Dabo" Swinney is an American college football coach. He is the head football coach at Clemson University. Swinney took over as head coach for the Clemson Tigers midway through the 2008 season, following the resignation of Tommy Bowden. Swinney has led the Tigers to two national championships in 2016 and 2018. He has the second-most wins of head coach in Clemson history behind Frank Howard. 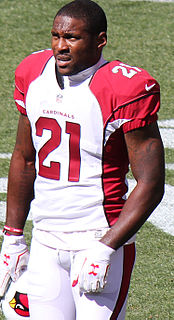 Patrick De'mon Peterson Jr. is an American football cornerback for the Arizona Cardinals of the National Football League (NFL). He played college football at Louisiana State University (LSU), where he won the Chuck Bednarik Award as the best defensive player in the country, the Jim Thorpe Award as the best defensive back, and was unanimously recognized as an All-American. He was selected fifth overall by the Cardinals in the first round of the 2011 NFL Draft. Peterson has been invited to the Pro Bowl in each of his first eight seasons in the NFL.

The Memphis Tigers football team represents the University of Memphis in college football in the NCAA Division I Football Bowl Subdivision. The Tigers play in the American Athletic Conference as an all-sports member. They play home games at Liberty Bowl Memorial Stadium. The team's current head coach is Mike Norvell, who began his tenure in 2016.

The 1940 Cotton Bowl Classic was the fourth edition of the postseason college football bowl game, between the Clemson Tigers and the Boston College Eagles. It was played on Monday, January 1, 1940, at the Cotton Bowl in Dallas, Texas.

The 1938 Orange Bowl was a college football bowl game between the Auburn Tigers and Michigan State Spartans played at Burdine Stadium in Miami, Florida, on January 1, 1938. It was the fourth Orange Bowl, and the first held in the stadium. The Tigers won by a score of 6–0, with the game's only points coming in the second quarter on a two-yard touchdown run by Ralph O'Gwynne. The game holds the Orange Bowl record for the fewest points scored by both teams. 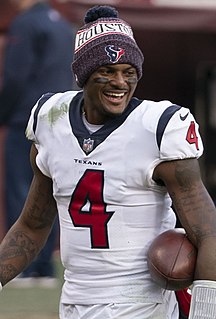 Derrick Deshaun Watson is an American football quarterback for the Houston Texans of the National Football League (NFL). He played college football at Clemson and led the team to a CFP championship game appearance in 2015 and a national championship win in 2016. He was selected by the Texans 12th overall in the 2017 NFL Draft. In 2018, his second year, Watson was named to his first career Pro Bowl.

Jake Daniel Elliott is an American football placekicker for the Philadelphia Eagles of the National Football League (NFL). He played college football at Memphis. He was part of the Eagles' Super Bowl LII championship team against the New England Patriots.

The 1947 Pacific Tigers football team was an American football team that represented the College of the Pacific (COP) during the 1947 college football season.

The 2017 Liberty Bowl was a post-season American college football bowl game played on December 30, 2017, at Liberty Bowl Memorial Stadium in Memphis, Tennessee. The 59th edition of the Liberty Bowl featured the Iowa State Cyclones of the Big 12 Conference against the Memphis Tigers of the American Athletic Conference. It was one of the 2017–18 bowl games concluding the 2017 FBS football season. Sponsored by automobile parts and accessories store AutoZone, it was officially known as the AutoZone Liberty Bowl.