Tiger Please is a Welsh indie / alternative rock five-piece band from Cardiff, Wales. The band formed in August 2008. The band's influences are U2, Sigur Rós, Kings of Leon, John Mayer and Counting Crows. They signed with Walnut Tree Records in 2009 and released their debut EP They Don't Change Under Moonlight. Kerrang! magazine, Rock Sound magazine, and Classic Rock magazine praised the EP and featured the band on the Rock Sound and Classic Rock cover-mount albums. The band toured with Kids In Glass Houses, InMe, Twin Atlantic and Funeral For A Friend.

During the summer of 2010, Tiger Please toured the United Kingdom and recorded a second EP called Seasons which was also critically acclaimed.[ citation needed ] They also played the Redbull tent at Download Festival in 2010 and the Jägermeister stage at Sonisphere Festival. [1] [2] 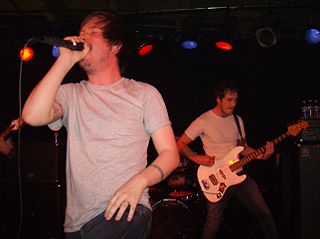 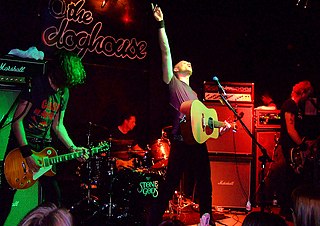 Stone Gods were a British hard rock / heavy metal band formed by some ex-members of the UK hard rock band The Darkness. Their debut album, titled Silver Spoons & Broken Bones, was released on 7 July 2008, with the first single "Knight of the Living Dead" being released on 23 June 2008. On 9 December 2010 they officially went on hiatus.

Fei Comodo were an English five-piece post-hardcore band from Essex, England. They were signed to Small Town Records and developed a strong fanbase since their formation through playing many live shows across the country. They released five EPs, two singles, and one studio mini album. Renowned for an energetic live show the band completed several UK tours with other hardcore and metalcore bands from the South East, such as InMe and Bury Tomorrow.

Huron are an English thrash metal band formed in Plymouth in late 2007. They released their first studio album, Cheyne Stoking, in June 2009 on Rising Records. The band have garnered positive critical attention for their live performances. They released their fourth studio recording The Dead Stay Dead in February 2016.

New Device are a UK-based hard rock band, established in late 2007. The band's style is rooted in classic rock of the 1980s, influenced by bands such as: Aerosmith, Skid Row, Metallica and Guns N' Roses. They first gained a modicum of fame via their Myspace site, when they uploaded early demos which were successfully received by fans. 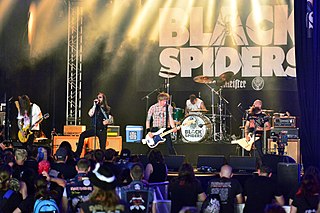 Black Spiders are an English rock band based in Sheffield, England. Their latest and third studio album entered the UK Rock Chart reaching No. 9. re-entering again at No. 28, after Record Store Day

Walnut Tree Records, established in 2007 and closed in 2012, was a British independent record label from Watford which specialised in limited run releases from new and upcoming bands. 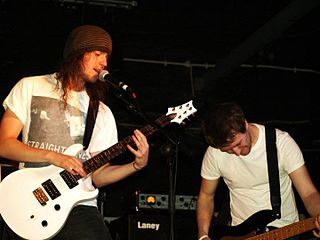 Colours of One are a Welsh four-piece alternative rock band from the surrounding areas of Bridgend, Wales. As of 2016, the line-up consists of lead vocalist Mike Simmonds-Dickens, bassist Lewis Morgan, guitarist Miff Tuck and drummer Paul Jones.

They Don't Change Under Moonlight is the debut mini album from Welsh rock band Tiger Please which was released 2 November 2009.

Don Broco are a British rock band formed in Bedford, England, in 2008. The band consists of Rob Damiani, Simon Delaney (guitar), Tom Doyle and Matt Donnelly. The band have released four studio albums, including Priorities (2012), Automatic (2015) and Technology (2018). Their most recent album Amazing Things (2021) was their first to reach No.1 in the UK Album Charts.

Cuba Cuba are a Welsh pop-rock band from Cardiff, South Wales, formed in 2007. 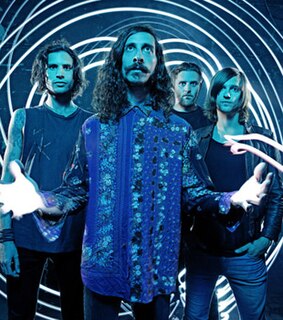 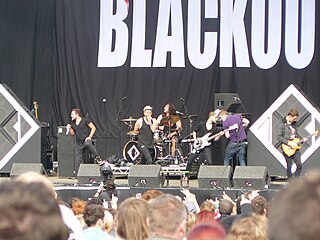 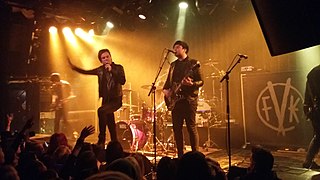 The One Hundred is an English crossover band from London, combining elements of metalcore, punk, grime, rap and electronics. The band released their debut EP Subculture in 2014 via Australian independent label UNFD and have toured extensively across the United Kingdom and Europe as well as performing at major festivals such as Sonisphere, Download Festival and Reading and Leeds. In September 2016 the band announced via their social media that they had signed to Spinefarm Records, a division of Universal Music Group.

Press to Meco is an English band hailing from Crawley and Croydon. The band is known for its fusing of intricate riffs, progressive sensibilities, math-influenced structures, pop choruses and three-part harmonies.