Tiger beetles are a large group of beetles, from the Cicindelinae subfamily, known for their aggressive predatory habits and running speed. The fastest known species of tiger beetle, Rivacindela hudsoni , can run at a speed of 9 km/h (5.6 mph; 2.5 m/s), or about 125 body lengths per second. [1] As of 2005, about 2,600 species and subspecies were known, with the richest diversity in the Oriental (Indo-Malayan) region, followed by the Neotropics. [2]

Tiger beetles often have large bulging eyes, long, slender legs and large curved mandibles. All are predatory, both as adults and as larvae. The genus Cicindela has a cosmopolitan distribution. Other well-known genera include Tetracha , Omus , Amblycheila and Manticora . While members of the genus Cicindela are usually diurnal and may be out on the hottest days, Tetracha, Omus, Amblycheila and Manticora are all nocturnal. Both Cicindela and Tetracha are often brightly colored, while the other genera mentioned are usually uniform black in color. Tiger beetles in the genus Manticora are the largest in size of the subfamily. These live primarily in the dry regions of southern Africa.

The larvae of tiger beetles live in cylindrical burrows as much as a meter deep. They are large-headed, hump-backed grubs and use their humpbacks to flip backwards, for the purpose of capturing prey insects that wander over the ground. The fast-moving adults run down their prey and are extremely fast on the wing, their reaction times being of the same order as that of common houseflies. Some tiger beetles in the tropics are arboreal, but most run on the surface of the ground. They live along sea and lake shores, on sand dunes, around playa lakebeds and on clay banks or woodland paths, being particularly fond of sandy surfaces. [3]

Tiger beetles are considered a good indicator species and have been used in ecological studies on biodiversity. Several species of wingless parasitic wasps in the genus Methocha (family Thynnidae), lay their eggs on larvae of various Cicindela spp., such as Cicindela dorsalis . [4]

Tiger beetles display an unusual form of pursuit in which they alternatively sprint quickly toward their prey, then stop and visually reorient. This may be because while running, the beetle is moving too fast for its visual system to accurately process images. [1] To avoid obstacles while running they hold their antennae rigidly and directly in front of them to mechanically sense their environment. [5]

The oldest fossil tiger beetle yet found, Cretotetracha grandis, comes from the Yixian Formation in Inner Mongolia, China, and dates to the early Cretaceous Period, 125 million years ago. Most fossils found are grey or yellow silty mudstone. [6] Traits that identify Cretotetracha as Cicindelinae include long mandibles shaped like sickles, simple teeth arranged along the mandible's inner surface, antennae that attach to the head between the base of the mandibles and the eye. The left mandible is approximately 3.3 mm and the right mandible is approximately 4.2mm long. A long body form roughly around 8.1mm where the combined eyes and head are wider than the thorax, and long running legs. [6] Previously known Mesozoic fossils of tiger beetles have been described from the Crato Formation, about 113 million years ago [6] and Oxycheilopsis cretacicus from the Santana Formation, 112 million years ago, [7] both in Brazil.

Tiger beetles were traditionally classified as the family Cicindelidae but most authorities now treat them as the subfamily Cicindelinae of the Carabidae (ground beetles). The most recent classifications, however, have relegated them to a monophyletic subgroup within the subfamily Carabinae, though this is not yet universally accepted. Accordingly, there is no consensus classification for this group, at any level from family down to subspecies, and it can be exceedingly difficult to decipher the taxonomic literature surrounding this group. Many genera are the result of the splitting of the large genus Cicindela , and many were described by the German entomologist Walther Horn.

Harpalinae is a huge subfamily of ground beetles that contains 20,000 species or ~6,400 spp. in 24 tribes worldwide, according to others. A rarely used common name for the subfamily is the harp beetles. The Harpalinae contain the most apomorphic ground beetles, displaying a wide range of forms and behaviors. Some are, rare among ground beetles, omnivores or even herbivores.

Cicindela, commonly known as common tiger beetles are generally brightly colored and metallic beetles, often with some sort of patterning of ivory or cream-colored markings. They are most abundant and diverse in habitats very often near bodies of water with sandy or occasionally clay soils; they can be found along rivers, sea and lake shores, sand dunes, around dry lakebeds, on clay banks, or woodland paths. 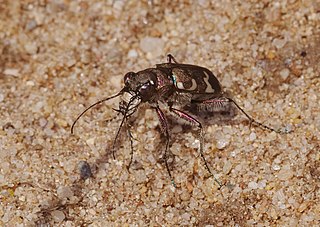 Cicindela hybrida, also known as the northern dune tiger beetle, has a wide distribution in the Palaearctic region. 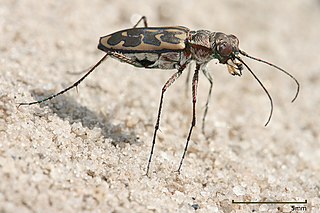 Lophyra is a genus of tiger beetles in the family Carabidae capable of flight. It contains the following species:

Apteroessa grossa is a species of tiger beetles in the family Carabidae, the sole species in the genus Apteroessa and described on the basis of a specimen from the Coromandel region (Tranquebar) in southern India. It is somewhat large and robust, and is among the few tiger beetles with highly reduced wings making them flightless. There are three known specimens in museums, with varying degrees of damage. The species has not been seen in the wild after its description in the 18th century and is thought to be extremely local in distribution.

Dromica is a genus of beetles in the family Carabidae, containing the following species:

Euryarthron is a genus of beetles in the family Carabidae, containing the following species:

Megacephala is a small genus of beetles in the family Carabidae restricted to Africa; it was formerly a much larger genus, but its constituent species have been subsequently placed in other genera, primarily Tetracha, but also Grammognatha, Metriocheila, Phaeoxantha, and Pseudotetracha.

Myriochila is a genus of tiger beetles in the family Carabidae, containing the following species:

Physodeutera is a genus of beetles in the family Carabidae, containing the following species:

Prothyma is a genus of beetles in the family Carabidae, containing the following species:

Pseudoxycheila is a genus of beetles in the family Carabidae, containing the following species: 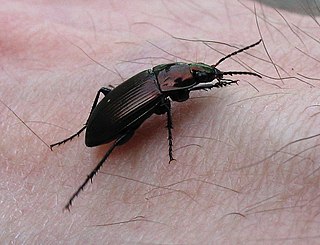 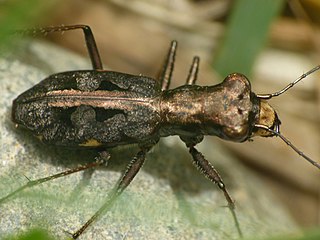 Cylindera dromicoides is a species of ground beetle of the subfamily Cicindelinae. It is flightless and has been found mainly along the Himalayas from India through Nepal and Bhutan and in the Chinese province of Yunnan.

Cicindelini is a tribe of tiger beetles in the family Carabidae, containing the overwhelming majority of genera (>110) and species in the subfamily.

Megacephalini is a tribe of big-headed tiger beetles in the family Carabidae. 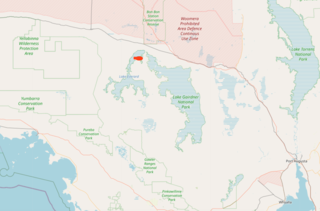 Rivacindela hudsoni is an Australian species of the flightless family Cicindelinae or "tiger beetle" and is the fastest-running known insect. The genus Rivacindela is contentiously treated as a subgenus of the broader Cicindela and are typically found in saline habitats such as dry salt lakes and salt streams. The species was discovered in South Australia and described in 1997, with an adult form of approximately 20–21mm in length and a running speed of 2.49m/s, or 120 body lengths per second. The comprehensive phylogeny that defines the Rivacindela hudsoni is as follows: Animalia, Arthropoda, Insecta, Coleoptera, Carabidae, Cicindelinae, Rivacindela, Rivacindela hudsoni.