The tiger trout (Salmo trutta × Salvelinus fontinalis) is a sterile, intergeneric hybrid of the brown trout (Salmo trutta) and the brook trout (Salvelinus fontinalis). Pronounced vermiculations in the fish's patterning gave rise to its name, evoking the stripes of a tiger. Tiger trout are a rare anomaly in the wild, as the parent species are relatively unrelated, being members of different genera and possessing mismatched numbers of chromosomes. [1] [2] [3] However, specialized hatchery rearing techniques are able to produce tiger trout reliably enough to meet the demands of stocking programs. [4] [5]

Prior to the 19th century, naturally occurring tiger trout were an impossibility, as the native range of brown trout in Eurasia and brook trout in North America do not overlap and the species could therefore never have encountered one another in the wild. [3] When the widespread stocking of non-native gamefish began in the 1800s, brown trout and brook trout began establishing wild populations alongside each other in some places and the opportunity for hybridization in the wild arose. [6] Instances of stream-born tiger trout were recorded in the United States at least as early as 1944 and, despite being exceptionally rare, they've been documented numerous times since during the 20th and 21st centuries. [3]

Tiger trout can be produced reliably in hatcheries and they've been incorporated into stocking programs in the United States at least as early as the 1960s. [8] Hatchery productivity is enhanced by heat shocking the fertilized hybrid eggs, causing the creation of an extra set of chromosomes which increases survival rates from 5% to 85%. [9] Tiger trout have been reported to grow faster than natural species, [10] though this assessment is not universal. [11] They are also known to be highly piscivorous and are consequently a useful control against rough fish populations. [7] This, along with their desirability as novel gamefish, means tigers have continued to be popular with many fish stocking programs. US states with tiger trout stocking programs include Arizona, Colorado, Connecticut, Georgia, Idaho, Pennsylvania, Washington, Wyoming, Utah, and Massachusetts. [2] [12] [13] [14] [4] [15] 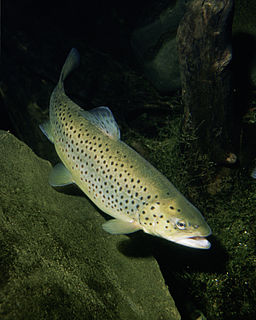 Trout are species of freshwater fish belonging to the genera Oncorhynchus, Salmo and Salvelinus, all of the subfamily Salmoninae of the family Salmonidae. The word trout is also used as part of the name of some non-salmonid fish such as Cynoscion nebulosus, the spotted seatrout or speckled trout.

The lake trout is a freshwater char living mainly in lakes in northern North America. Other names for it include mackinaw, namaycush,lake char (or charr), touladi, togue, and grey trout. In Lake Superior, it can also be variously known as siscowet, paperbelly and lean. The lake trout is prized both as a game fish and as a food fish. Those caught with dark coloration may be called mud hens.

The brown trout is a European species of salmonid fish that has been widely introduced into suitable environments globally. It includes purely freshwater populations, referred to as the riverine ecotype, Salmo trutta morpha fario, a lacustrine ecotype, S. trutta morpha lacustris, also called the lake trout, and anadromous forms known as the sea trout, S. trutta morpha trutta. The latter migrates to the oceans for much of its life and returns to fresh water only to spawn. Sea trout in Ireland and Britain have many regional names: sewin in Wales, finnock in Scotland, peal in the West Country, mort in North West England, and white trout in Ireland. 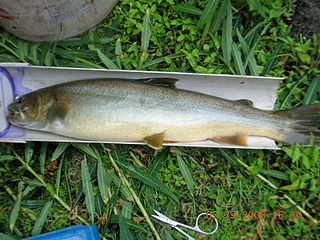 The bull trout is a char of the family Salmonidae native to northwestern North America. Historically, S. confluentus has been known as the "Dolly Varden", but was reclassified as a separate species in 1980. Bull trout are listed as a threatened species under the U.S. Endangered Species Act (1998) and as vulnerable on the IUCN Red List of Threatened Species.

The brook trout is a species of freshwater fish in the char genus Salvelinus of the salmon family Salmonidae. It is native to Eastern North America in the United States and Canada, but has been introduced elsewhere in North America, as well as to Iceland, Europe, and Asia. In parts of its range, it is also known as the eastern brook trout, speckled trout, brook charr, squaretail, brookie or mud trout, among others. A potamodromous population in Lake Superior, as well as an anadromous population in Maine, is known as coaster trout or, simply, as coasters. The brook trout is the state fish of nine U.S. states: Michigan, New Hampshire, New Jersey, New York, North Carolina, Pennsylvania, Vermont, Virginia, and West Virginia, and the Provincial Fish of Nova Scotia in Canada. 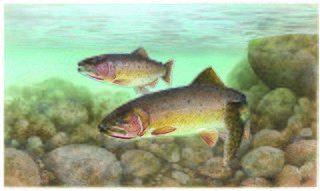 The cutthroat trout(Oncorhynchus clarkii) is a fish species of the family Salmonidae native to cold-water tributaries of the Pacific Ocean, Rocky Mountains, and Great Basin in North America. As a member of the genus Oncorhynchus, it is one of the Pacific trout, a group that includes the widely distributed rainbow trout. Cutthroat trout are popular gamefish, especially among anglers who enjoy fly fishing. The common name "cutthroat" refers to the distinctive red coloration on the underside of the lower jaw. The specific name clarkii was given to honor explorer William Clark, coleader of the Lewis and Clark Expedition. 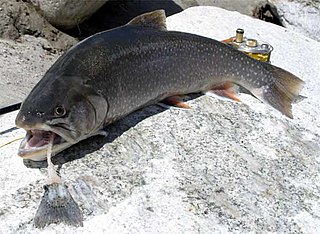 The Arctic char or Arctic charr is a cold-water fish in the family Salmonidae, native to alpine lakes and arctic and subarctic coastal waters. Its distribution is Circumpolar North. It spawns in freshwater and populations can be lacustrine, riverine, or anadromous, where they return from the ocean to their fresh water birth rivers to spawn. No other freshwater fish is found as far north; it is, for instance, the only fish species in Lake Hazen which extend up to 81°56′N68°55′W on Ellesmere Island in the Canadian Arctic. It is one of the rarest fish species in Great Britain and Ireland, found mainly in deep, cold, glacial lakes, and is at risk there from acidification. In other parts of its range, such as the Nordic countries, it is much more common, and is fished extensively. In Siberia, it is known as golets and it has been introduced in lakes where it sometimes threatens less hardy endemic species, such as the small-mouth char and the long-finned char in Elgygytgyn Lake.

The silver trout is an extinct char species or variety that inhabited a few waters in New Hampshire prior to 1939, when a biological survey conducted on the Connecticut watershed by the New Hampshire Fish and Game Department found none. 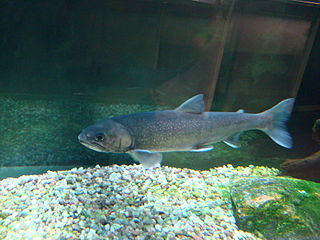 Salvelinus is a genus of salmonid fish often called char or charr; some species are called "trout". Salvelinus is a member of the subfamily Salmoninae within the family Salmonidae. The genus has a northern circumpolar distribution, and most of its members are typically cold-water fish that primarily inhabit fresh waters. Many species also migrate to the sea.

Salmo trutta fario, sometimes called the river trout, and also known by the name of its parent species, the brown trout, is a predatory fish of the family Salmonidae and a subspecies or morph of the brown trout species, Salmo trutta, which also includes sea trout and a lacustrine trout. Depending on the supply of food, river trout measure 20 to 80 cm (0.7–2.6 ft) in length; exceptionally they may be up to 1 m (3.3 ft) long and weigh up to over 13 kg (29 lb). Their back is olive-dark brown and silvery blue, red spots with light edges occur towards the belly, the belly itself is whitish yellow. River trout usually attain a weight of up to 2 kg (4.4 lb). They can live for up to 18 years.

The aurora trout, Salvelinus fontinalis timagamiensis, is a variant or subspecies of the brook trout native to two lakes in the Temagami District of Ontario, Canada. The existence of the fish was brought to the attention of the angling world by four American anglers who were taken by Archie King of Latchford, Ontario, into Ontario's Lady Evelyn River system in 1923. Recognizing the fish as different or unique, the anglers took a specimen back to the Carnegie Museum in Pittsburgh, in the United States, where Dr. Arthur W. Henn was asked to identify the fish. He wrote about the fish in 1925 wherein he and Rinckenbach identified it as a distinct species, Salvelinus timagamiensis, but since a seminal re-examination of the material by Sale in 1967, taxonomists now agree the fish is, in a fact, at most a subspecies of the brook trout, named Salvelinus fontinalis timagamiensis. Genetic data has not yet supported its taxonomic distinction. 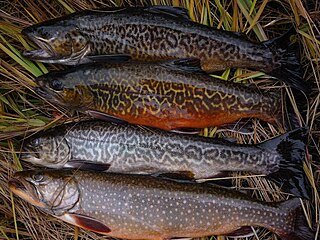 The splake or slake is a hybrid of two fish species resulting from the crossing of a male brook trout and a female lake trout. The name itself is a portmanteau of speckled trout and lake trout, and may have been used to describe such hybrids as early as the 1880s. Hybrids of the male lake trout with the female brook trout have also been produced, but are not as successful.

The greenback cutthroat trout is the easternmost subspecies of cutthroat trout. The greenback cutthroat, once widespread in the Arkansas and South Platte River drainages of Eastern Colorado and Southeast Wyoming, today occupies less than 1% of its historical range. It is currently listed as threatened under the Endangered Species Act. It was adopted as the state fish of Colorado on March 15, 1994 replacing the unofficial rainbow trout.

The Allegheny National Fish Hatchery was established by Congress in 1959 to produce rainbow, brook, and brown trout for northwestern Pennsylvania streams. Construction began in the late 1960s. Fish production began on site in 1974. 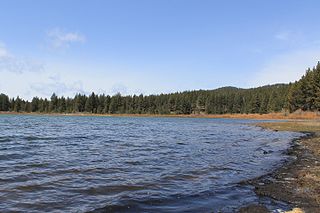