Tigerair Taiwan (Chinese :臺灣虎航; pinyin :Táiwān Hǔháng) is a low-cost carrier (LCC) based at Taoyuan International Airport. It was formed as a joint venture between China Airlines Group and Budget Aviation Holdings.

Prior to 2016, China Airlines held 80 percent of the share while Budget Aviation Holdings and Mandarin Airlines each held 10 percent. [2] In 2017, as Tigerair Singapore merged into Scoot, CAPA reported that China Airlines had purchased Budget Aviation Holdings' 10% stake, leaving China Airlines and its subsidiary Mandarin Airlines as joint owners of the airline. [3] It is the only LCC in Taiwan following the collapse of TransAsia Airways and V Air in 2016 and also the only airline left with Tigerair branding, as Tigerair Australia and the rest had ceased operations by end of 2020.

Taiwan was the last major market in Asia to have a low-cost carrier (LCC). In early 2013, China Airlines and Transasia Airways became the first Taiwanese carriers to express interest in forming an LCC. The further reduction in entry barriers by the Civil Aeronautics Administration made it favorable for the creation of LCCs.

In October 2013, China Airlines chairman Sun Hung-Hsiang announced that the airline was in talks with a foreign LCC to start an LCC based in Taiwan. The partnership was made public in December 2013 when China Airlines created a new joint venture with Singaporean low-cost carrier Tigerair to establish Tigerair Taiwan. As part of the deal, China Airlines would hold a 90 percent share in the new carrier with Tiger Airways Holdings owning the other 10 percent. In March 2014, China Airlines subsidiary Mandarin Airlines took over 10% of its parent company's share in Tigerair Taiwan.

In September 2014, Tigerair Taiwan received an Air Operator's Certificate from the Civil Aeronautics Administration. The airline then commenced operations on 26 September 2014, with the first flight being from Taoyuan International Airport to Changi Airport.

All Tigerair Taiwan aircraft wear the Tigerair group livery along while having the words "TAIWAN" painted onto the rear of the fuselage. The airline is the first international carrier to have the word 'Taiwan' as part of a corporate livery or a company name. [2]

As of July 2022, the Tigerair Taiwan fleet consists of the following aircraft: [19]

China Airlines is the state-owned flag carrier of the Republic of China (Taiwan), and one of its two major airlines along with EVA Air. It is headquartered in Taoyuan International Airport and operates over 1,400 flights weekly to 102 cities across Asia, Europe, North America, and Oceania. Carrying over 19 million passengers and 5700 tons of cargo in 2017, the carrier was the 33rd largest airline in the world in terms of revenue passenger kilometers (RPK) and 10th largest in terms of freight revenue ton kilometers (FRTK).

Japan Asia Airways, Co., Ltd. (JAA) was a subsidiary of Japan Airlines (JAL) which existed between 1975 and 2008. JAA was headquartered in the Japan Airlines Building in Shinagawa, Tokyo.

Kaohsiung International Airport (高雄國際機場) is a medium-sized civil airport in Siaogang District, Kaohsiung, Taiwan, also known as Siaogang Airport. With nearly seven million passengers in 2018, it is the second busiest airport in Taiwan, after Taoyuan. The airport has a single east–west runway and two terminals: one international and one domestic. 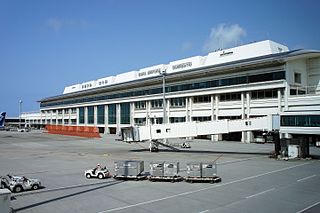 Naha Airport is a second class airport located 4 km (2.5 mi) west of the city hall in Naha, Okinawa. It is Japan's seventh busiest airport and the primary air terminal for passengers and cargo traveling to and from Okinawa Prefecture, Japan, and handles scheduled international traffic to Taiwan, Hong Kong, South Korea, Thailand, Singapore and mainland China. The airport is also home to Naha Air Base of the Japan Air Self-Defense Force. 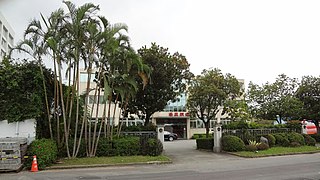 TransAsia Airways was a Taiwanese airline based in Neihu District in Taipei. Though the company started its operations focusing mainly on the Taiwanese domestic market, it operated on many scheduled international routes and focused mainly on Southeast and Northeast Asia and cross-strait flights at the time of closure.

UNI Air is a regional airline based in Zhongshan, Taipei, Taiwan. With an operation focus on domestic routes, UNI Air is a subsidiary of Evergreen Group, making it a sister airline of the mainline operator EVA Air. It was known as Makung Airlines (馬公航空) until 1996, when EVA Air took a majority share of the airline. In 1998, the airline merged with Great China Airlines (大華航空) and Taiwan Airways (臺灣航空), which EVA Air also had interests in, to form UNI Airways.

The China Airlines Group is the organizational designation used by a conglomerate of transportation and associated service companies based out of Taiwan, officially the Republic of China.

Peach, officially Peach Aviation Limited, is a Japanese budget airline. Its head office is at Kansai International Airport and in Tajiri, Osaka Prefecture.

Scoot Pte Ltd, operating as Scoot, is a Singaporean low-cost airline and a wholly owned subsidiary of Singapore Airlines. It began its operations on 4 June 2012 on medium and long-haul routes from Singapore, predominantly to various airports throughout the Asia-Pacific. Scoot's airline slogan is Escape the Ordinary.

Vanilla Air Inc. was a low-cost airline in Japan wholly owned by All Nippon Airways. Its head office was within Terminal 2 of Narita International Airport in Narita, Chiba Prefecture. The airline ceased operations in October 2019 on its merger with Peach Aviation.

V Air was a Taiwanese low-cost airline based in Taipei active from 2014 through 2016. It was a franchise subsidiary of TransAsia Airways serving flights to Japan, South Korea, Thailand and Cambodia from its base at Taiwan Taoyuan International Airport.