Tigernach, an early Irish personal name, may refer to: 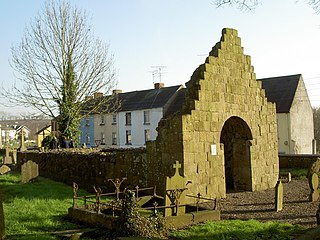 Tigernach mac Coirpri was an early Irish saint, patron saint of Clones in the province of Ulster.

Tigernach Ua Braín was abbot of Clonmacnoise and abbot of Roscommon. He was once held to be the author of the Annals of Tigernach, hence its name, but though this view is no longer sustainable, the nature and extent of his involvement remain unclear.

Dearbhfhorghaill (1108–1193), anglicized as Derval, was a daughter of Murchad Ua Maeleachlainn, king of Meath, and of his wife Mor, daughter of Muirchertach Ua Briain. She is famously known as the "Helen of Ireland" as her abduction from her husband Tigernán Ua Ruairc by Diarmait Mac Murchada, king of Leinster, in 1152 played some part in bringing the Anglo-Normans to Irish shores, although this is a role that has often been greatly exaggerated and often misinterpreted.

The Annals of Tigernach is a chronicle probably originating in Clonmacnoise, Ireland. The language is a mixture of Latin and Old and Middle Irish.

Alpín was king of the Picts from 726-728, together with Drest. The Pictish Chronicle king lists give Alpín and Drest a five-year joint rule.

The Chronicle of Ireland is the modern name for a hypothesized collection of ecclesiastical annals recording events in Ireland from 432 to 911 AD. 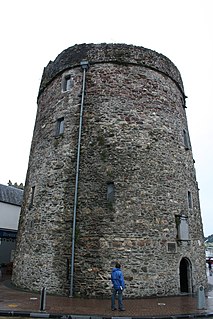 Gilla Críst Ua Máel Eóin was an Irish historian and Abbot of Clonmacnoise.

Clones Abbey is a ruined monastery that later became an Augustinian abbey in the twelfth century, and its main sights are ecclesiastical. The Abbey was formerly known as St. Tighernach Abbey, and was referred to locally as the "wee abbey". Parochial and monastic settlements were separated, and it seems likely that the building became the Abbey of St. Peter and Paul.

Manchán of Min Droichit was an Irish scholar and Abbot.

Saint Sillan was early Irish saint and abbot of Bangor Abbey, Bangor, County Down. He was recorded as being a disciple and second or third successor of Saint Comgall, who was the founder and first abbot of the Benedictine monastery at Bangor. The village of Kilsheelan, County Tipperary is named after him. His Irish name is Sioláin which can translate to either "seed-basket" or "cullender/sieve".