"St. Tigernan of Errew worked in Tirawley in the early part of the sixth century. His paten still exists. No more is known of him except he was the founder of Errew Abbey, Lough Conn, County Mayo. The Breastagh Ogham Stone near the king's house of Rathfran commemorates a "son of Cairbre, son of Amalgaid", who may be father or uncle of Tigernan, or a great-grandson of Fiachra Elgach."

He was patron saint of south Tirawaley. His cousin, Cuimín, was a contemporary of St. Aodhan, who died in 562. Cuimin was related to Aodhan, and worked as a Christian missionary in Tirawley, and perhaps Tireragh.

Errew - Oireadh - is a slender peninsula jutting out from the western shore of Lough Conn. The Mac Fhirbhisigh family believed themselves to be natives of the area (Ó Muraíle, 1996, p.6).

The present Abbey of Errew seems to have been built in the early-to-mid 12th century "under the influence of the Cistercians, but before Irish architects were familiar with it." (Knox, p. 49). This abbey appears to have been the ecclesiastical head of the Ó Lactna lordship of An Bac and Glen Nephin.

Gilla Áedha Ua Maigín, Bishop of Cork (died 1172), is noted in the Annals of the Four Masters as "of the family of Errew of Lough Con."

Crossmolina is a town in the Barony of Tyrawley in County Mayo, Ireland, as well as the name of the parish in which Crossmolina is situated. The town sits on the River Deel near the northern shore of Lough Conn. Crossmolina is about 9 km (5.6 mi) west of Ballina on the N59 Road. Surrounding the town, there are a number of agriculturally important townlands, including Enaghbeg, Rathmore, and Tooreen. 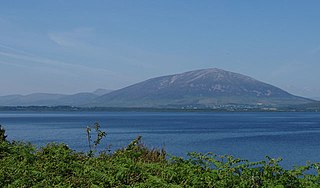 Nephin or Nefin, at 806 metres (2646 ft), is the highest standalone mountain in Ireland and the second-highest peak in Connacht, Ireland. It is to the west of Lough Conn in County Mayo. Néifinn is variously translated as meaning 'heavenly', 'sanctuary', or "Finn's Heaven". 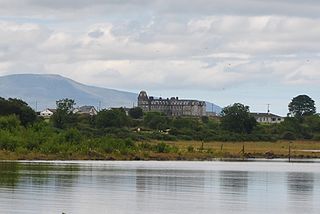 Errew is a small rural settlement, about 8 km south from the county town of Castlebar, County Mayo, Ireland.

Cú Choigcríche Ó Cléirigh was an Irish historian and genealogist, known in English as Peregrine O'Clery.

Saint Cuimín is an Irish saint associated with the parish of Kilcummin in the barony of Tirawley, County Mayo. Kilcummin, a headland to the west of Killala Bay, preserves the remains of a religious site, with a church of early date and a graveyard.