Tigga may refer to:

Manoj Tigga is a Member of Legislative assembly from Madarihat constituency in West Bengal. In the West Bengal Legislative Assembly election, 2016, Tigga of BJP defeated his nearest rival Padam Lama of All India Trinamool Congress by 22,308.

Shanti Tigga is the first female jawan in the Indian Army. She joined when she was 35 and has had two children. Tigga was awarded the title of best trainee.

Full Surface is a record label founded in 1999, by Swizz Beatz. With the help of his protégé, Cassidy, who was the 1st artist signed, the label was officially established. The label operated through Sony's J and through Universal's Interscope, Motown and Universal Motown. However, the label also had released material through joint ventures with other companies outside the Sony BMG group. It operates as a subsidiary of Warner and is distributed by Atlantic.

"Stella Ella Ola" is a clapping game where players stand or sit in a circle placing one hand over her or his neighbour's closer hand and sing the song. On every beat, a person claps their higher hand onto the touching person's palm. The cycle continues until the song ends at which point if the person's hand is slapped, they are considered "out" and must stand or sit in the center of the circle, or leave the circle and watch from the edges.

Cuppa Coffee Studios is an animation studio in Toronto, Ontario, Canada. Cuppa Coffee was founded by Adam Shaheen in 1992. It specializes in both stop-motion animation and 2D animation.

Gossner Theological College is the only Theological Seminary of Jharkhand affiliated to Serampore College. It is owned by Gossner Evangelical Lutheran Church in Chotanagpur and Assam.

Ghettoblaster is the seventh studio album by Armand Van Helden. The vocals in I Want Your Soul were sampled from "Do You Want It Right Now" by Siedah Garrett. The album was released in a special edition 2-disc set as well as the standard edition. Some of the tracks are throwbacks to freestyle music which was popular in the 1980s.

The Sumba roundleaf bat is a species of bat in the family Hipposideridae. It lives in Indonesia and East Timor. It is present on the islands of Sumba, Rote, Sumbawa, Flores, Semau, and Savu. 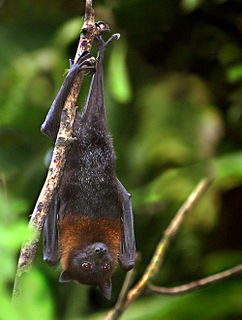 Lyle's flying fox is a species of flying fox in the family Pteropodidae. It is found in Cambodia, Thailand and Vietnam, with an outlying population in Yunnan, China. It faces persecution from farmers and it is killed for bushmeat in parts of its range. The International Union for Conservation of Nature has rated its conservation status as being "vulnerable".

The Malayan roundleaf bat is a horseshoe bat found only in Malaysia. It is listed as a data deficient species.

The Roman Catholic Diocese of Raiganj is a diocese located in the city of Raiganj in the Ecclesiastical province of Calcutta in India.

The Roman Catholic Diocese of Raigarh is a diocese located in the city of Raigarh in the Ecclesiastical province of Raipur in India.

Madarihat is an assembly constituency in Alipurduar district in the Indian state of West Bengal. The seat is reserved for scheduled tribes.

The grand roundleaf bat, also known as the grand leaf-nosed bat, is a species of bat in the genus Hipposideros. It can be found in China, Myanmar, Thailand, and Vietnam.

Hamipur High School, established in 1947, is one of the oldest schools in Odisha, India. This educational institute is for boys from class VI to class X. It is located at Hamirpur, Rourkela near Hamirpur Catholic Cathedral Church. The school is administered by the Catholic Education Board of Rourkela and is affiliated to Board of Secondary Education, Odisha.

Simon Tigga was an Indian politician.He was elected to the Lok Sabha, lower house of the Parliament of India from Khunti ,Bihar as a member of the Indian National Congress.