Sextus Tigidius Perennis (died 185) served as Praetorian Prefect under the Roman emperor Commodus. Perennis exercised an outsized influence over Commodus and was the effective ruler of the Roman Empire. In 185, Perennis was implicated in a plot to overthrow the emperor by his political rival, Marcus Aurelius Cleander, and executed on the orders of Commodus.

Herodian, Cassius Dio, and the Augustan History provide conflicting accounts of the rise and fall of Perennis, but all three agree on the essential points of his powerful position under Commodus and his swift execution in 185. His name also appears among the signatories on the Tabula Banasitana, dated to 177.

Perennis perhaps served as praefectus annonae during the reign of Marcus Aurelius. [1] The precise date of his elevation to Praetorian Prefect is uncertain. Herodian's account indicates that he did not assume the post until the accession of Commodus, but it is possible that he served as the junior partner of Publius Tarrutenius Paternus as early as 177. Paternus was alleged to have displeased Commodus by ordering the death of the emperor's lover and friend Saoterus for his questionable involvement in an assassination plot headed by Lucilla and Marcus Ummidius Quadratus Annianus. Whatever the extent of his involvement in the removal of Paternus, Perennis thenceforth wielded enormous power as the lone prefect.

Herodian describes how Perennis capitalized on Commodus's distrust of the Roman Senate (following the aforementioned assassination attempt to which the Senate was linked) by destroying many powerful Senators and claiming their wealth as his own. [2] So too was Perennis thought to have held ambitions of military power: soldiers were given lavish gifts in an attempt to seduce them to his cause, and his sons were appointed to commanding army roles. [3] The Augustan History suggests Perennis also persuaded Commodus to allow him political control, freeing the Emperor for his more hedonistic personal pursuits. [4]

Herodian wrote that Perennis began to plot against Commodus. Gifts from his newly-acquired fortune were to curry favor with the army and his sons were secretly recruiting additional forces in anticipation of the coming revolt. Before they could act, however, the plot was exposed. First, during a public festival honoring Capitoline Jupiter, an unknown person took the stage before the performers and warned the emperor and the assembled crowd of Perennis' plans. He wasn't believed, and Perennis had him executed. Later, a group of soldiers came to Commodus and relayed the details of the plot, and showed him coins with Perennis' portrait that they had stolen from one of prefect's sons. [5] [6] The emperor had him and his sons executed. Also instrumental in Perennis' downfall was Marcus Aurelius Cleander, who would go on to fulfill a similar role in the next period of Commodus's reign. 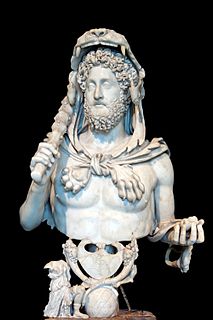 Commodus was Roman emperor jointly with his father Marcus Aurelius from 176 until his father's death in 180, and solely until 192. His reign is commonly considered to mark the end of the golden period of peace in the history of the Roman Empire known as the Pax Romana. 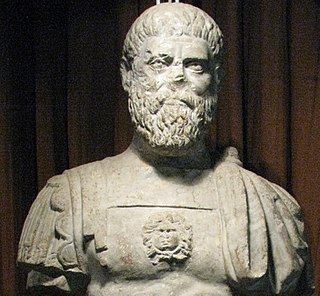 Pertinax was a Roman soldier and politician who ruled as Roman emperor for the first three months of 193. He succeeded Commodus to become the first emperor during the tumultuous Year of the Five Emperors. 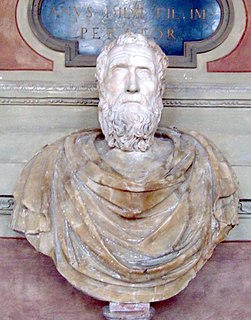 Marcus Didius Julianus was Roman emperor for nine weeks from March to June 193, during the Year of the Five Emperors.

The Praetorian Guard was an elite unit of the Imperial Roman army whose members served as personal bodyguards and intelligence for Roman emperors. During the era of the Roman Republic, the Praetorians served as a small escort force for high-ranking officials such as senators or provincial governors like procurators, and also serving as bodyguards for high-ranking officers within the Roman legions. With the republic's transition into the Roman Empire, however, the first emperor, Augustus, reformed the Guard as his personal security detail. Although they continued to serve in this capacity for roughly three centuries, the Guard became notable for its intrigue and interference in Roman politics, to the point of overthrowing emperors and proclaiming their successors. In 312, the Guard was disbanded by Constantine the Great, as he oversaw the destruction of their barracks at the Castra Praetoria. 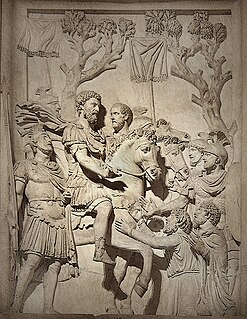 Tiberius Claudius Pompeianus was a politician and military commander during the 2nd century in the Roman Empire. A general under the Emperor Marcus Aurelius, Pompeianus distinguished himself during Rome's wars against the Parthians and the Marcomanni. He was a member of the imperial family due to his marriage to Lucilla, a daughter of Marcus Aurelius, and was a key figure during the emperor's reign. Pompeianus was offered the imperial throne three times, though he refused to claim the title for himself. 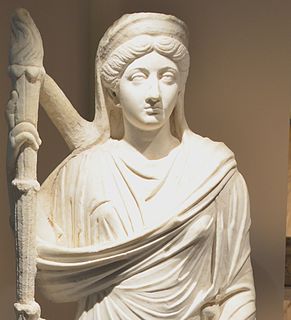 Annia Aurelia Galeria Lucilla or Lucilla was the second daughter and third child of Roman Emperor Marcus Aurelius and Roman Empress Faustina the Younger. She was the wife of her father's co-ruler and adoptive brother Lucius Verus and an elder sister to later Emperor Commodus. Commodus ordered Lucilla's execution after a failed assassination and coup attempt when she was about 33 years old.

Narcissus was a Roman athlete, likely a wrestler, from the 2nd century AD. He is best known to history as the assassin of the Roman Emperor Commodus, by whom he was employed as a wrestling partner and personal trainer in order to train Commodus for his self-indulgent appearances in the Colosseum as a gladiator. In AD 192 he was recruited by several senators, led by Praetorian prefect Quintus Aemilius Laetus, to assassinate the emperor.

Saoterus was a Bithynian Greek freedman from Nicomedia who served as the Roman Emperor Commodus's palace chamberlain. His career is sketched by Herodian, Dio Cassius and the Historia Augusta. Commodus preferred to exercise his rule through palace officials and Saoterus was the first of these; Saoterus was seen as in the Emperor's favour at the outset of his reign, as he accompanied Commodus in his chariot when he made his ceremonial entry into Rome on 22 October 180. Commodus placed him in a high position in his government, resulting in resentment from noble senatorial families. The Historia Augusta, apparently drawing on the testimony of Marius Maximus, insinuates that Commodus had a homosexual infatuation with Saoterus. After the attempt on Commodus's life in 182, Saoterus was implicated in the plot by the praetorian prefect Tigidius Perennis, and was murdered by the freedman Cleander, who succeeded him as chamberlain. 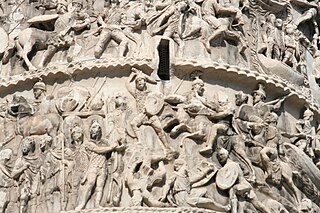 The Marcomannic Wars were a series of wars lasting over a dozen years from about 166 until 180 AD. These wars pitted the Roman Empire against, principally, the Germanic Marcomanni and Quadi and the Sarmatian Iazyges; there were related conflicts with several other Germanic, Sarmatian and Gothic peoples along both sides of the whole length of the Roman Empire's northeastern European border, the river Danube. The struggle against the Germans and Sarmatians occupied the major part of the reign of Roman emperor Marcus Aurelius, and it was during his campaigns against them that he started writing his philosophical work Meditations.

Annia Aurelia Fadilla, most commonly known as Fadilla was one of the daughters born to Marcus Aurelius and his wife Faustina the Younger. She was a sister to Lucilla and Commodus. Fadilla was named in honor of her late maternal aunt Aurelia Fadilla. The cognomen Fadilla, was the cognomen of the mother and a half-sister of Antoninus Pius. Her maternal grandparents were Antoninus Pius and Faustina the Elder and her paternal grandparents were Domitia Lucilla and praetor Marcus Annius Verus.

Marcus Aurelius Cleander, commonly known as Cleander, was a Roman freedman who gained extraordinary power as chamberlain and favourite of the emperor Commodus, rising to command the Praetorian Guard and bringing the principal offices of the Roman state into disrepute by selling them to the highest bidder. His career is narrated by Dio Cassius, Herodian and the Historia Augusta.

Publius Atilius Aebutianus was a prefect of the Roman imperial bodyguard, known as the Praetorian Guard, during the reign of emperor Commodus, from 185 until his death in 188. Aebutianus acceded to the office upon the execution of his predecessor Sextus Tigidius Perennis. 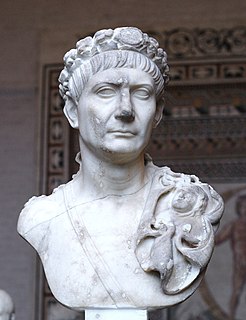 The gens Ulpia was a Roman family that rose to prominence during the first century AD. The gens is best known from the emperor Marcus Ulpius Trajanus, who reigned from AD 98 to 117. The Thirtieth Legion took its name, Ulpia, in his honor. The city of Serdica, modern day Sofia, was renamed as Ulpia Serdica.

Gaius Aufidius Victorinus was a Roman senator and general of the second century. A friend of the Emperor Marcus Aurelius and the son-in-law of the advocate and orator Marcus Cornelius Fronto, he was twice consul and governor of several Roman provinces.

Publius Tarrutenius Paternus was a Roman eques who flourished during the reign of emperor Marcus Aurelius. He achieved several military successes, leading first to his appointment as praetorian prefect and subsequently to his adlection into the Roman Senate. Paternus was accused of treason by Aurelius' son and successor Commodus, and executed.

Marcus Aurelius Papirius Dionysius was a Roman eques and jurist who held a number of military and civilian positions during the reign of the Emperors Marcus Aurelius and his son Commodus, including praefectus annonae, or overseer of the grain rations for Rome.

Titus Flavius Piso was a Roman eques who held at least two senior postings during the reign of the Emperors Marcus Aurelius and Commodus. 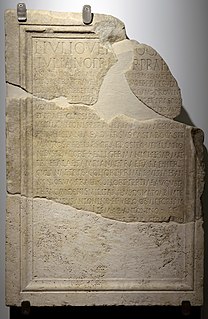 Lucius Julius Vehilius Gratus Julianus was a soldier and an eques who held a number of military and civilian appointments during the reigns of Marcus Aurelius and his son Commodus. Julianus received honors two separate times for his military service.