Tigné Point is a peninsula in Sliema, Malta. The area was originally occupied by several fortifications and a British barracks complex, which were left derelict for many years, until the area was redeveloped in the early 21st century. The area now contains many modern buildings and is popular among both locals and tourists.

The peninsula was originally known as Punta di Santa Maria, and its extremity is also known as Dragut Point. [1] [2]

The local militia had a small watch post on what is now Tigné Point in 1417. [3] During the Great Siege of Malta of 1565, the Ottoman admiral Dragut stationed a number of cannons at Tigné Point in a siege to capture Fort Saint Elmo from the Order of Saint John. He was killed by stray gunfire from the fort during the siege, and the extremity of the peninsula still bears his name, Dragut Point. [4] [5]

After the Great Siege, a chapel dedicated to Our Lady under various titles was built instead of a niche that was already in the area. In 1757, Lembi Battery was built in the area, and it became obsolete in 1792, when the Order built its last major fortification, Fort Tigné. The new fort, which later gave the area its name, played a significant role in the French invasion of 1798 and the subsequent Maltese uprising. [1]

When the British forces left in 1979, the barracks and the whole area fell into decay and neglect. Parts of both Fort Tigné and the British barracks were plundered or vandalized. [7] Garden Battery was buried and buildings were constructed over it, while Cambridge Battery was used as a restaurant, hotel and swimming pool.

Since the redevelopment project, Tigné Point has changed considerably. The modern buildings, easy accessibility and other factors helped transform the area from neglected abandoned barracks to a popular area which is frequented by both locals and tourists as it has a number of attractions. The Fort Cambridge apartments, which were completed in 2012, are among the tallest buildings in Malta. [8] [9]

The Point Shopping Mall opened in early 2010, built on the site of the former Tigné Barracks. Parts of the mall in Pjazza Tigné still contain some architectural elements of the barracks, including a series of arches that run along the square. The Point is Malta's largest shopping mall and it contains about 17,000m2 of retail floor space spread over three levels. It includes a supermarket and over 50 other shops. [10] 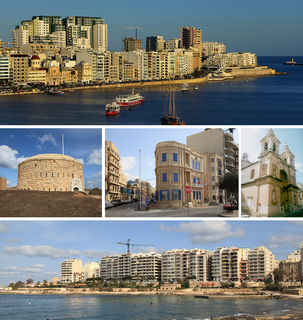 Sliema is a town located on the northeast coast of Malta in the Northern Harbour District. It is a major residential and commercial area and a centre for shopping, bars, dining, and café life. It is also the most densely populated town on the island. 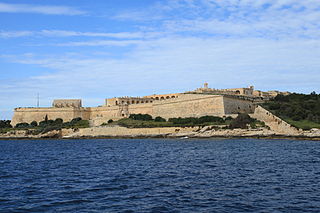 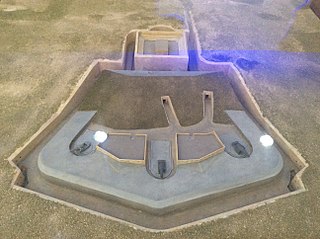 Fort Saint Rocco, also known as Fort Saint Roca on some maps, is a polygonal fort in Kalkara, Malta. It is located east of Rinella Battery and seaward of the village of Santu Rokku, and forms part of the complex of shore batteries built by the British to defend the coast east of the mouth of Grand Harbour between the 1870s and 1900s. 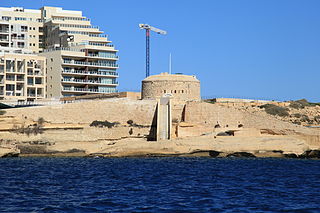 Fort Tigné is a polygonal fort in Tigné Point, Sliema, Malta. It was built by the Order of Saint John between 1793 and 1795 to protect the entrance to Marsamxett Harbour, and it is one of the oldest polygonal forts in the world. The fort was extensively altered by the British in the 19th century, and it remained in use by the military until 1979.

Garden Battery is an artillery battery in Sliema, Malta. It was built by the British between 1889 and 1894. The battery is located at Tigné Point, between Cambridge Battery and Fort Tigné.

Cambridge Battery is a Victorian-era battery in Sliema, Malta. It is commonly referred to as Fort Cambridge, although it was never classified as a fort while in use. It originally contained an Armstrong 100-ton gun.

Fort Campbell, also known locally as Il-Fortizza ta' Selmun, is a former fort in Mellieħa, Malta. It was built by the British between 1937 and 1938. It is notable as the most important fortification north of the Victoria Lines, and the last major fortification to be built in Malta. Today, it lies in ruins.

Jesuit Hill Battery, also known as Jesuit Battery or Point Cortin Battery, was an artillery battery in Marsa, Malta, built by Maltese insurgents during the French blockade of 1798–1800. It was part of a chain of batteries, redoubts and entrenchments encircling the French positions in Marsamxett and the Grand Harbour. 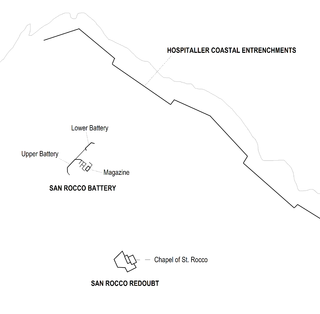 San Rocco Redoubt was a redoubt in Kalkara, Malta. It was built by Great Britain during the French blockade of 1798-1800. It was part of a chain of batteries, redoubts and entrenchments encircling the French positions in Marsamxett and the Grand Harbour. 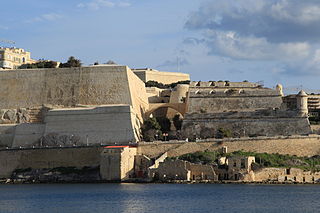 Lembi Battery, also known as Qala Lembi Battery, was an artillery battery in Sliema, Malta. It was built in 1757 by the Order of Saint John, and was considered as an outwork of Fort Manoel. The battery became obsolete with the construction of Fort Tigné in 1795, and it was briefly used as a summer residence before being demolished. In the 1870s, Cambridge Battery was built close to the site of Lembi Battery.

The National Congress Battalions, also known as the Truppe di Campagna, was an irregular military set up in Malta just after the Maltese rebellion against French rule in September 1798. It existed for two years before being disbanded on 11 September 1800. 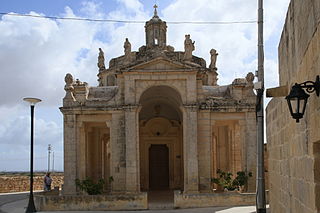 Dragonara Palace, also known as Palazzo Dragonara or Villa Dragonara, is a palace in St. Julian's, Malta. It was built in 1870 as a summer residence for the Scicluna family, and it is now a casino called Dragonara Casino.

The French invasion of Malta was the successful invasion of the islands of Malta and Gozo, then ruled by the Order of St. John, by the French First Republic led by Napoleon in June 1798 as part of the Mediterranean campaign of the French Revolutionary Wars.