Ticnamar is a village in the Arica and Parinacota Region, Chile.

Bangor is a town in La Crosse County, Wisconsin, United States. It is part of the La Crosse, Wisconsin Metropolitan Statistical Area. The population was 570 at the 2010 census. The Village of Bangor is located partially within the town.

Polar Times Glacier is a glacier on Ingrid Christensen Coast, flowing northward between Svarthausen Nunatak and Boyd Nunatak into the western part of Publications Ice Shelf. It was delineated by John H. Roscoe from aerial photographs taken by USN Operation Highjump, 1946-1947, and named by Roscoe after The Polar Times, a polar journal published by the American Polar Society, New York City. 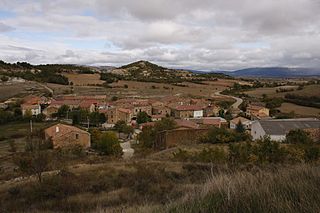 Carcedo de Bureba is a municipality located in the province of Burgos, Castile and León, Spain. According to the 2004 census (INE), the municipality has a population of 46 inhabitants.

Matilla la Seca is a small municipality located in the province of Zamora, Castile and León, Spain. According to the 2004 census (INE), the municipality has a population of 64 inhabitants.

Villalazán is a municipality located in the province of Zamora, Castile and León, Spain. According to the 2004 census (INE), the municipality has a population of 375 inhabitants.

Ward Inlet is a body of water in Nunavut's Qikiqtaaluk Region. It lies in eastern Frobisher Bay, forming a wedge into Baffin Island, separating Becher Peninsula from Hall Peninsula. Augustus Island lies deep into the inlet.

Ingeniero Jacobacci is a city in Río Negro Province, Argentina. It has a population of 5,719 inhabitants and was named in honor of Guido Jacobacci, the director of the railway opened in 1916 between San Antonio Oeste, on the Atlantic Ocean coast, and San Carlos de Bariloche, in the Andes. A remote outpost in windswept Patagonia, Jacobacci benefited from its proximity to scenic Lake Carilaufquen and in 1990, an airstrip was opened to facilitate tourist arrivals in the area.

Jutulstraumen Glacier is a large glacier in Queen Maud Land, Antarctica, about 120 nautical miles (220 km) long, draining northward to the Fimbul Ice Shelf between the Kirwan Escarpment, Borg Massif and Ahlmann Ridge on the west and the Sverdrup Mountains on the east. It was mapped by Norwegian cartographers from surveys and air photos by the Norwegian–British–Swedish Antarctic Expedition (1949–52) and air photos by the Norwegian expedition (1958–59) and named Jutulstraumen. More specifically jutulen are troll-like figures from Norwegian folk tales. The ice stream reaches speeds of around 4 metres per day near the coast where it is heavily crevassed.

Wubbold Glacier is a steeply inclined glacier, 8 nautical miles (15 km) long, flowing south from the Havre Mountains, situated in the northern portion of Alexander Island, Antarctica. The glacier drains the north, west and southwest slopes of Mount Pontida, and flows into Lazarev Bay north of Mount Holt. It was photographed from the air by Ronne Antarctic Research Expedition in 1947 and was mapped from the photographs by Falkland Islands Dependencies Survey in 1960. Named by Advisory Committee on Antarctic Names for Commander J.H. Wubbold, USCG, Commanding Officer, USCGC Northwind, U.S. Navy Operation Deepfreeze, 1977.

Ochs Glacier is a glacier flowing to the head of Block Bay between Mount Iphigene and Mount Avers, in the Ford Ranges of Marie Byrd Land.

Toynbee Glacier is a glacier situated in the northeast portion of Alexander Island, Antarctica, extending 17 nautical miles (31 km) long and 5 nautical miles (9 km) wide, lying between Mount Huckle, Mount Spivey and Mount Stephenson of the northern portion of the Douglas Range on the west and Mount Tyrrell and Mount Tilley on the east. It flows north from the east face of Mount Stephenson into the George VI Ice Shelf that occupies George VI Sound. The glacier was first photographed from the air in 1937 by the British Graham Land Expedition under Rymill. Surveyed in 1948 by the Falkland Islands Dependencies Survey and named for Patrick A. Toynbee, FIDS air pilot at Stonington Island in 1948 and 1949.

The Lassus Mountains are a large group of mountains, 15 nautical miles (28 km) long and 3 nautical miles (6 km) wide, rising to 2,100 metres (6,900 ft) and extending south from Palestrina Glacier in the northwest part of Alexander Island, Antarctica. They overlook Lazarev Bay and a few minor islands within the bay such as Dint Island and Umber Island; Haydn Inlet lies to the south while the Havre Mountains lie immediately north.

The following lists include the extreme and significant geographic points of the islands of the Caribbean Sea.

The Japanese submarine I-70 was a Kaidai type of cruiser submarine active in World War II. A KD6 boat, I-70 was built for the Imperial Japanese Navy (IJN) in the early 1930s. At that time it was commanded by Commander Sano Takao.