Tihomir Ivaylov Ivanov (Bulgarian: Тихомир Ивайлов Иванов; born 11 July 1994) is a Bulgarian athlete specialising in the high jump. [2] He won a gold medal at the 2019 Summer Universiade in Naples.

1No mark in the final

Tihomir is a South Slavic male given name which means "quiet" and "peace". In Russian however the word “mir” мир also means world. So in Russian language, the name means “Tiho” = quiet “mir” = peace or world) It may refer to: 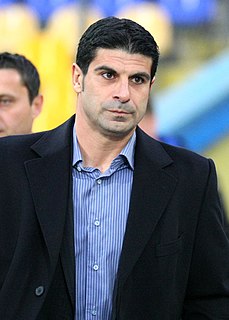 Georgi Alexandrov Ivanov, nicknamed Gonzo, born 2 July 1976 in Plovdiv), is a former Bulgarian football striker and currently manager. Ivanov is a former Bulgarian international and is perhaps best known for his goal-scoring prowess in The Eternal Derby of Bulgaria, netting 15 goals, having bettered Nasko Sirakov's record in 2008. He is presently a sports director at Lokomotiv Plovdiv. 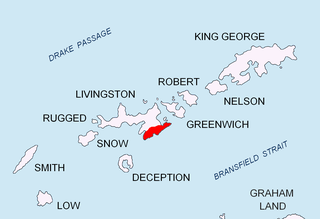 Friesland Ridge is a ridge on Livingston Island in the South Shetlands, part of the Tangra Mountains. The summit, Mount Friesland, which rises to 1,700 metres (5,600 ft), is the northwesternmost of the ridge's six main peaks. Its elevation was estimated at 1,684 metres (5,525 ft) by a 1995/96 Bulgarian survey; the present figure was produced by a 2003 Australian GPS survey, and closely matched by the Bulgarian survey Tangra 2004/05.

Sea Lion Glacier is the site of an isolated 350 metres (1,150 ft) long glacier on Hurd Peninsula, eastern Livingston Island in the South Shetland Islands, Antarctica. It is located southwest of Hesperides Hill and northwest of Atlantic Club Ridge, separated from the latter by Sea Lion Tarn, and terminating on the South Bay coast.

The Bulgarian name system has considerable similarities with most other European name systems, and with those of other Slavic peoples such as the Russian name system, though it has certain unique features.

Ivan Kamenov Ivanov is a Bulgarian former professional footballer who played as a centre-back. He has been a member of the Bulgarian national team. In 2013, Ivanov was named the Bulgarian Footballer of the Year, becoming the first defender to win this award after Trifon Ivanov in 1996.

Lyubomir Ivanov is a Bulgarian scientist, non-governmental activist, and Antarctic explorer. He is a graduate of the St. Kliment Ohridski University of Sofia with M.S. degree in mathematics in 1977, earned his PhD from Sofia University in 1980 under the direction of Dimiter Skordev, with a dissertation entitled Iterative Operative Spaces, and was the 1987 winner of Acad. Nikola Obreshkov Prize, the highest Bulgarian award in mathematics.

VIP Brother 2 was the second season of the celebrity version of the Bulgarian reality television show Big Brother. It was aired on Nova Television. The show started on 26 March 2007 and ended on 27 April 2007. It lasted for 33 days, 4 days longer than the previous season, because of the high ratings. The show was hosted by Niki Kanchev.

Anton Sashov Ivanov is a retired Bulgarian sprinter who specialized in the 400 metres. 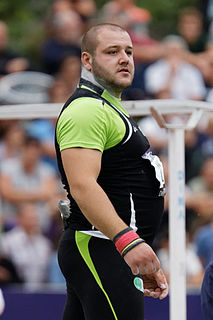 Georgi Stoyanov Ivanov is a Bulgarian shot putter. His personal best is 21.09 metres, achieved on 20 July 2013 in Ústí nad Labem. 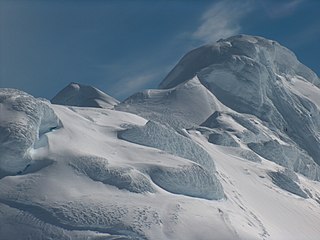 Mount Friesland is a mountain rising to 1,700.2 metres (5,578 ft) in the homonymous Friesland Ridge, the summit of Tangra Mountains and Livingston Island in the South Shetland Islands, Antarctica. Its north rib is connected to Pliska Ridge by Nesebar Gap on the west, and to Bowles Ridge by Wörner Gap on the north. On the east Mount Friesland is connected to Presian Ridge and further on to Catalunyan Saddle and Lyaskovets Peak. On the south-southwest it is connected by a short saddle to ‘The Synagogue’ a sharp-peaked rock-cored ice formation abutting neighbouring St. Boris Peak. The peak is heavily glaciated and crevassed, surmounting Huntress Glacier to the west, Perunika Glacier to the north-northwest, Huron Glacier to the northeast and Macy Glacier to the southeast. The local weather is notoriously unpleasant and challenging; according to the seasoned Antarctic mountaineer Damien Gildea who climbed in the area, 'just about the worst weather in the world'. 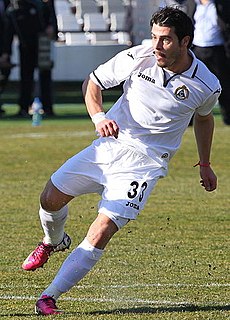 Galin Ivanov is a Bulgarian professional footballer, who plays as an attacking midfielder for CSKA 1948 Sofia and the Bulgarian national team. 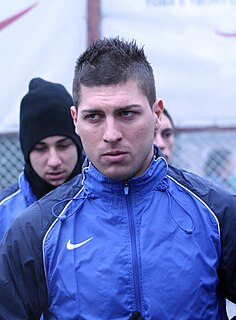 Tihomir Kanev is a Bulgarian footballer currently playing as a forward for Sevlievo. 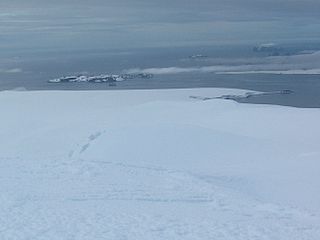 Zverino Island is the largest and westernmost island in the Meade group lying in the north entrance to McFarlane Strait in the South Shetland Islands, Antarctica. It is extending 1.2 km (0.75 mi) by 700 m (2,300 ft), with surface area of 48 hectares, and is snow-free in summer.

Vladimir Vasilev Ivanov was a Bulgarian sprinter who specialized in the 200 metres. 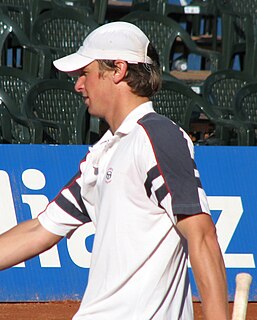 Tihomir Ruslanov Grozdanov is a former professional Bulgarian tennis player. On 30 December 2013, he reached his highest ATP singles ranking of 394 whilst his best doubles ranking was 545 on 17 January 2011. 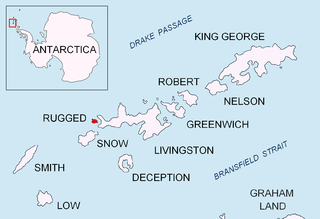 Prosechen Island is the northern of two rocky islands in Smyadovo Cove on the west coast of Rugged Island in the South Shetland Islands. The area was visited by early 19th century sealers. It is named after the settlement of Prosechen in Northeastern Bulgaria. 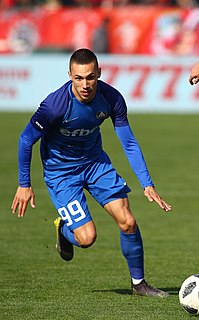 Stanislav Ivanov is an Bulgarian professional footballer who plays as a winger for Major League Soccer club Chicago Fire.