Timothy John Keefe (January 1,1857 –April 23,1933),nicknamed "Smiling Tim" and "Sir Timothy",was an American Major League Baseball pitcher. He stood 5 feet 10 inches (1.78 m) tall and weighed 185 pounds (84 kg). He was one of the most dominating pitchers of the 19th century and posted impressive statistics in one category or another for almost every season he pitched. He was the second MLB pitcher to record 300 wins. He was elected to the Baseball Hall of Fame in 1964.

Keefe was born on January 1,1857,in Cambridge,Massachusetts. His father,Patrick,was an Irish immigrant. When Tim Keefe was a child,Patrick served in the Union Army during the American Civil War. Patrick was a prisoner of war for several years. [1] All four of Patrick's brothers were killed in the war;Tim had been named after two of them. Tim's brother became a major and fought in the Spanish–American War. [2]

After the war,Patrick had high expectations for his son,and the two frequently fought over Tim's pursuit of baseball. With the help of local former pitcher Tommy Bond,Keefe persisted and became known as a standout local pitcher by 1876. [1] Keefe's early professional career included minor league stints in Lewiston,Clinton,New Bedford,Utica,and Albany. [3]

Keefe entered the major leagues in 1880 with the Troy Trojans. He immediately established himself as a talented pitcher,posting an astounding 0.86 ERA in 105 innings pitched,a record that still stands. (He also posted the best Adjusted ERA+ in baseball history in 1880.) Despite the sterling ERA,he managed but a 6–6 record,pitching in 12 games,all complete games.

In 1883,after the Trojans folded,Keefe rose to stardom with the New York Metropolitans of the American Association under manager "Gentleman" Jim Mutrie and had one of the most dominating seasons in baseball's early history. On July 4 of that year,Keefe pitched both ends of a doubleheader against Columbus,winning the first game with a one-hitter;the second a two-hit gem. He went 41–27 over 619 innings pitched with a 2.41 ERA and 361 strikeouts. His 1884 campaign was almost as dominant,winning 37 games,losing 17,and striking out 334.

In 1885,John B. Day,who owned the Metropolitans and the New York Giants of the National League,moved Keefe and Mutrie to the Giants. Here,Keefe joined future Hall of Famers Buck Ewing,Monte Ward,Roger Connor,Mickey Welch,and "Orator" Jim O'Rourke to form an outstanding team that finished with a fine 85–27 record. Keefe went 32–13 with a 1.58 ERA and 227 strikeouts. In 1887,Keefe sat out several weeks of the season after he struck a batter in the head with a pitch;he was said to have suffered a nervous breakdown. [4]

He had arguably his greatest season in 1888,when he led the league with a 35–12 record,1.74 ERA and 335 strikeouts (see Triple Crown). He won 19 consecutive games that season,a record that stood for 24 years. The Giants played the St. Louis Browns of the American Association in a postseason series for the Dauvray Cup,and Keefe added four more wins to his tally. Keefe even designed the famous all-black "funeral" uniforms the Giants wore that season.

Keefe was very well paid for his career,yet he was a leading member of the Brotherhood of Professional Base Ball Players,an early players' union that fought for the welfare of players. He assisted his brother-in-law Monte Ward to form the Players' League for the 1890 season. As a co-organizer of the Players' League,he recognized that he might be financially vulnerable if the league failed to make money. Keefe transferred ownership of his real estate assets to his mother so that they would remain safe from any legal rulings. [5]

Shortly before the Players' League was founded,Keefe had started a sporting goods business in New York with W. H. Becannon,a former employee of baseball owner and sporting goods entrepreneur Albert Spalding. Keefe and Becannon manufactured the Keefe ball,the official baseball of the league. Spalding and the other NL owners fought against the new league,employing legal and financial maneuvers (such as slashing NL ticket prices) that made competition difficult. [6] The Players' League folded after one season. [5]

During the 1891 season,Keefe was released by New York. He was drawing a high salary and was not meeting the expectations of the team's leadership. After his release,Keefe said,"I hate to leave New York,am very fond of it,and would do all in my power for New York,but what am I to do? I have been systematically done by the New York Baseball Club... They would not let me play,and when I did get a chance,I worked under a disadvantage. I feel that I am just as good a player as I ever was." [8]

Keefe moved to the Philadelphia Phillies after his release from the Giants. He retired after the 1893 season with 342 wins (10th all time),a 2.62 ERA,and 2,562 strikeouts. His 2,562 strikeouts were a major league record at the time of his retirement. He was also the first pitcher to achieve three 300-plus strikeout seasons,done during his dominating prime in the 1880s in which he won the most games of the decade with 291. He still holds the record for having wins in the most ballparks,with 47.

Keefe was nicknamed "Sir Timothy" because of his gentlemanly behavior on and off the field. He never drank or smoked. [9]

Late in his playing career,Keefe began to coach college baseball and he continued in this capacity after his retirement as a player. Beginning in the spring of 1893,Keefe began to work as a pitching coach for Harvard. [10] Keefe also worked as an umpire for a total of 243 major league games;his most active year was 1895,when he umpired 129 games. He was also involved in real estate. He died in his hometown of Cambridge,Massachusetts,at the age of 76. 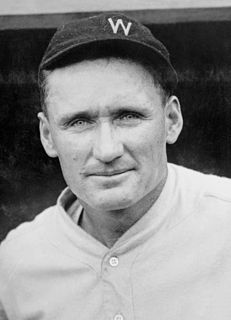 Steven Norman Carlton is an American former professional baseball player. He played in Major League Baseball as a left-handed pitcher for six different teams from 1965 to 1988, most notably as a member of the Philadelphia Phillies with whom he won four Cy Young Awards as well as the 1980 World Series. He was elected to the Baseball Hall of Fame in 1994. 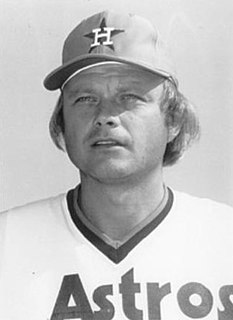 Joseph Franklin Niekro was an American Major League Baseball right-handed pitcher. He was the younger brother of pitcher Phil Niekro, and the father of former Major League first baseman Lance Niekro. Niekro was born in Martins Ferry, Ohio, and attended Bridgeport High School in Bridgeport, Ohio and West Liberty University in West Liberty, West Virginia. During a 22-year baseball career, he pitched from 1967 to 1988 for seven different teams, primarily for the Houston Astros.

Warren Edward Spahn was an American professional baseball player. He played in Major League Baseball as a left-handed pitcher in 1942 and then from 1946 until 1965, most notably for the Boston Braves, who became the Milwaukee Braves after the team moved west before the 1953 season. His baseball career was interrupted by his military service in the United States Army during the Second World War. 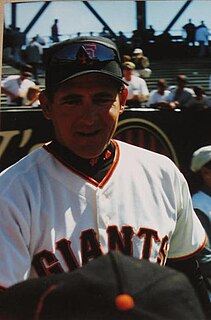 David Allan Righetti, nicknamed "Rags", is an American professional baseball coach and former player. A left-handed pitcher, Righetti played in Major League Baseball from 1979 through 1995 for the New York Yankees, San Francisco Giants, Oakland Athletics, Toronto Blue Jays, and Chicago White Sox. He served as the pitching coach for the Giants from 2000 through 2017. 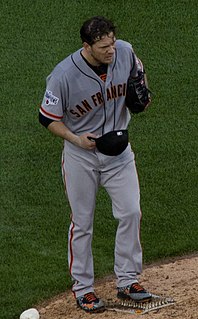 Timothy Adam Hudson is an American former professional baseball pitcher of Major League Baseball (MLB). After spending his college years at Chattahoochee Valley Community College and Auburn University, Hudson played in the major leagues for the Oakland Athletics (1999–2004), the Atlanta Braves (2005–13) and the San Francisco Giants (2014–15). With the Giants, he won the 2014 World Series over the Kansas City Royals.

John Stanley Sanford was an American professional baseball player. He played in Major League Baseball as a right-handed pitcher from 1956 through 1967. Sanford was notable for the meteoric start to his career when, he led the National League with 188 strikeouts as a 28-year-old rookie for the Philadelphia Phillies in 1957. He later became a 20-game-winner and made his only World Series appearance as a member of the San Francisco Giants. He also played for the California Angels and the Kansas City Athletics.

Matthew Thomas Cain, nicknamed "The Horse", "Big Daddy, "Big Sugar" and "Cainer", is an American former professional baseball pitcher who played his entire Major League Baseball (MLB) career for the San Francisco Giants from 2005 to 2017. A three-time World Series champion and a three-time All-Star, he is widely regarded as a central figure of the Giants' success in the 2010s for his pitching and leadership. 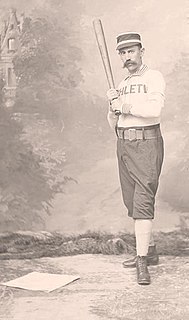 Jeffrey David Innis was an American baseball pitcher who played seven seasons in Major League Baseball (MLB). Nicknamed "I-Man", he played for the New York Mets from 1987 to 1993. He batted and threw right-handed. 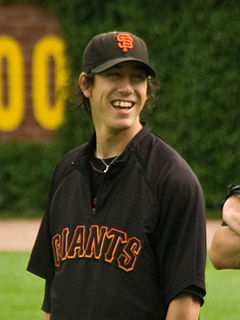 The Providence Grays went 84–28 during the 1884 season to win the National League championship. The team started out with two main pitchers, Charles "Old Hoss" Radbourn and Charlie Sweeney. After Sweeney jumped to the Union Association in mid-season, Radbourn pitched most of the Grays' remaining games and led the team to the pennant. Radbourn won 60 games by himself, setting a Major League Baseball record that has never been broken. 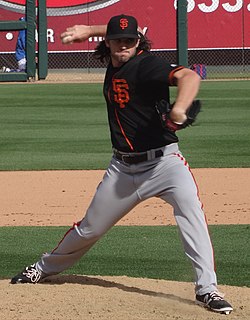 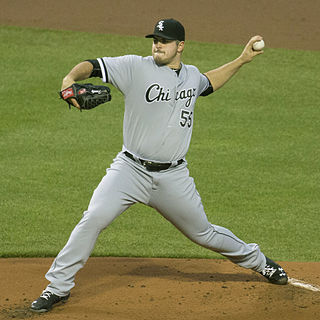 Carlos Antonio Rodón is an American professional baseball pitcher for the San Francisco Giants of Major League Baseball (MLB). Before joining the Giants in 2022, Rodón played seven seasons for the Chicago White Sox. On April 14, 2021, Rodón pitched the 20th no-hitter in White Sox history, against the Cleveland Indians.