Tim McInnerny ( /ˌmækɪˈnɜːrni/ MAK-i-NUR-nee; born 18 September 1956) is an English actor. He is known for his many roles on stage and television, including as Lord Percy Percy and Captain Darling in the 1980s British sitcom Blackadder .

McInnerny was born on 18 September 1956 in Cheadle Hulme, Cheshire, the son of Mary Joan (née Gibbings) and William Ronald McInnerny. [1] He was brought up in Cheadle Hulme, and Stroud, Gloucestershire, and educated at Marling School, a grammar school in Stroud, and read English at Wadham College, Oxford, matriculating in 1976 [2] after taking a gap year backpacking around the world. [3]

McInnerny's first role was in Blackadder during 1980s. He played the two bumbling related aristocrats with the same name of Lord Percy Percy in the first series (The Black Adder) and the second series (Blackadder II); he declined to do the third series for fear of being typecast, though he did make a guest appearance in one episode and returned to play Captain Kevin Darling in the fourth series (Blackadder Goes Forth) a character significantly different from the Lords Percy.

He had a minor but significant role in the highly acclaimed 1985 BBC TV serial Edge of Darkness as Emma Craven's boyfriend Terry Shields. Recent TV appearances include Law & Order: UK (2011) as a man wrongly convicted of murdering his daughter, and New Tricks (2012). In 2016, McInnerny joined the cast of the HBO series Game of Thrones in Season 6 as Lord Robett Glover. [4]

In 2007 McInnerny spoke candidly about his love of ITV sitcoms, after receiving criticism for his views expressed on the BBC cult show I Love the '70s (British TV series) : "I think shows like Mind Your Language and Love Thy Neighbour need to be remembered for what they were; truly fantastic examples of sitcom writing that hasn't been seen since. The content is unfortunate in the cold light of modern society, but that's no reason to stop praising the sheer brilliance of the writers that ITV had in its ranks during that decade." [5]

He played Dr. Frank-N-Furter in the 1990 West End production of The Rocky Horror Show . His performance can be heard on the soundtrack album of this production. [8]

He was cast in Pravda alongside Anthony Hopkins. [9]

In summer 2007, he played Iago in Othello at Shakespeare's Globe on Bankside in London. [10]

In 1989, he co-starred with Kate Bush in the music video for her song "This Woman's Work". [11] He also appeared in the Westlife video for "Uptown Girl", along with Claudia Schiffer, Robert Bathurst, Crispin Bonham-Carter, Ioan Gruffudd and James Wilby. Since 2012, McInnerny has also been a patron of the Norwich Film Festival. [12] 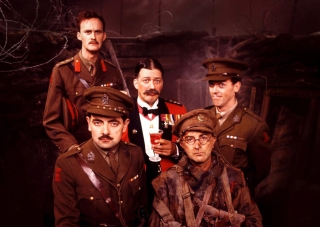 Blackadder is a series of four period British sitcoms, plus several one-off instalments, which originally aired on BBC One from 1983 to 1989. All television episodes starred Rowan Atkinson as the antihero Edmund Blackadder and Tony Robinson as Blackadder's dogsbody, Baldrick. Each series was set in a different historical period, with the two protagonists accompanied by different characters, though several reappear in one series or another, e.g., Melchett and Lord Flashheart.

Helen Atkinson-Wood is an English actress and comedian born in Cheadle Hulme, Cheshire. 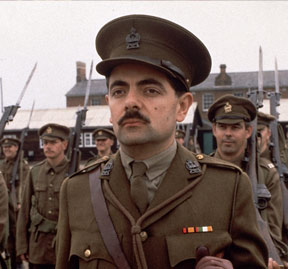 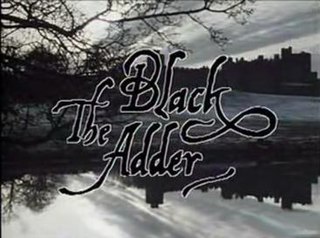 The Black Adder is the first series of the BBC sitcom Blackadder, written by Richard Curtis and Rowan Atkinson, directed by Martin Shardlow and produced by John Lloyd. The series was originally aired on BBC 1 from 15 June 1983 to 20 July 1983, and was a joint production with the Australian Seven Network. Set in 1485 at the end of the British Middle Ages, the series is written as a secret history which contends that King Richard III won the Battle of Bosworth Field, only to be unintentionally assassinated by his nephew's son Edmund and succeeded by said nephew, Richard IV, one of the Princes in the Tower. The series follows the exploits of Richard IV's unfavoured second son Edmund in his various attempts to increase his standing with his father and, in the final episode, his quest to overthrow him. 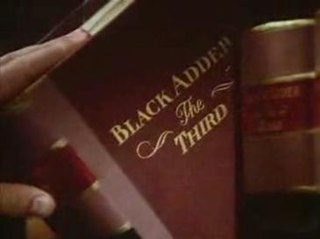 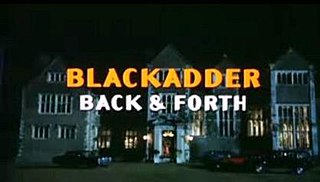 Blackadder: Back & Forth is a 1999 science fiction comedy short film based on the BBC period sitcom Blackadder that marks the end of the Blackadder saga. It was commissioned for showing in the specially built SkyScape cinema erected southeast of the Millennium Dome on the Greenwich peninsula in South London. The film follows Lord Edmund Blackadder and his idiotic servant, Baldrick, on a time travel adventure that brings the characters into contact with several figures significant to British history.

"The Black Adder" is the unaired pilot episode of the BBC television series Blackadder. Taped on 20 June 1982, it features the original incarnation of the character Edmund Blackadder, played by Rowan Atkinson. Following this pilot, The Black Adder eventually went into production and the first six-part series was broadcast in 1983, but with a number of changes to the casting, characterisation and plot; while the transmitted series was set in 1485 and the years following the Battle of Bosworth Field, this untransmitted pilot was set in 16th century, apparently during the Elizabethan Era.

"Bells" is the first episode of the BBC sitcom Blackadder II, the second series of Blackadder, which was set in Elizabethan England from 1558 to 1603. Although "Bells" was the first to be broadcast on BBC1, it was originally destined to be the second episode.

"Chains" is the final episode of the BBC sitcom Blackadder II, the second series of Blackadder, which was set in Elizabethan England from 1558 to 1603. Power-mad and self-professed "master of disguise", Prince Ludwig the Indestructible kidnaps Lord Blackadder and Lord Melchett. They escape his clutches but Prince Ludwig infiltrates the palace during a fancy dress ball.

"Money" is the fourth episode of the BBC sitcom Blackadder II, the second series of Blackadder, which was set in Elizabethan England from 1558 to 1603.

"Potato" is the third episode of the BBC sitcom Blackadder II, the second series of Blackadder, which was set in Elizabethan England from 1558 to 1603.

George is a supporting character who appeared in various adaptations of the BBC sitcom Blackadder, played by Hugh Laurie. Each series saw a different incarnation of the character, because each was set in a different period of history. He was most prominently featured in the third and fourth series. The character was added to the series as a replacement for the Lord Percy Percy character, who did not appear in the third instalment because Tim McInnerny, the actor playing him, feared being typecast. 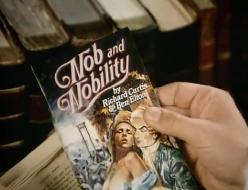 "Nob and Nobility" is the third episode of the BBC sitcom Blackadder the Third, the third series of Blackadder. 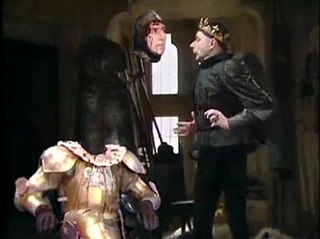 "The Foretelling" is the first episode of the BBC sitcom The Black Adder, the first series of the long-running comedy programme Blackadder. It marks Rowan Atkinson's début as the character Edmund Blackadder, and is the first appearance of the recurring characters Baldrick and Percy. The comedy actor Peter Cook guest stars as King Richard III.

"Born to Be King" is the second episode of The Black Adder, the first series of the BBC sitcom Blackadder. Set in late 15th-century England, the episode takes a humorous look at rivalries with the Kingdom of Scotland and centres the dramatic tension on the doubts cast over parentage of the lead character, Prince Edmund, Duke of Edinburgh.

"The Archbishop" is the third episode of the first series of the BBC sitcom Blackadder. It is set in England in the late 15th century, and follows the exploits of the fictitious Prince Edmund as he is invested as Archbishop of Canterbury amid a Machiavellian plot by the King to acquire lands from the Catholic Church. Most of the humour in the episode relies on religious satire.

"The Queen of Spain's Beard" is the fourth episode of the BBC historical sitcom The Black Adder, the first serial in the Blackadder series. Set in late 15th-century England, the episode parodies the practice of political marriages between the royal houses of Europe which characterised European politics during the Middle Ages. Its bawdy humour also deals with taboos surrounding premarital sex, gay stereotypes and the practice of child marriage.

"Witchsmeller Pursuivant" is the fifth episode of the first series of the BBC sitcom Blackadder. It is set in England in the late 15th century and centres on the fictitious Prince Edmund, who finds himself falsely accused of witchcraft by a travelling witch-hunter known as the Witchsmeller Pursuivant. The story satirises mediaeval superstition and religious belief.