Until 2015, Continental Chile used the time offset UTC−04:00 and Easter Island used UTC−06:00 for standard time, with daylight saving time roughly between October and March every year. In January 2015, the Chilean government announced that the entire country would keep the time offset used during daylight saving time permanently. [2] [3] However, the annual time change was reinstated in 2016 after feedback from the public about an increase in truancy during the winter months, [4] complaints about older computers and other electronic devices not using the right time zone, and fruit growers reporting a 15% loss in productivity. [5]

It has 2 hours of difference from the Continental time and changes the same days.

The official time on the mainland is now UTC−04:00, in the Magallanes and Chilean Antarctica Region is UTC−03:00, and on Easter Island is UTC−06:00.

Summer time in Chile, also known as daylight saving time (DST) in Chile was used in Chile from 1968 to 2014 & 2016–present. The time zone Chile Summer Time (CLST) was used on the mainland with the offset UTC−03:00 and Easter Island Summer Time (EASST) was used on Easter Island with the offset UTC−05:00. In mainland Chile, time was changed at 24:00 on a Saturday, i.e. at 0:00 on the following Sunday. In Easter Island, time was changed at 22:00 on a Saturday. [8] In 2015, the time offset used in this time zone eventually became the only time zone in Chile.

Several exceptions have been decreed to the current rule that began in 1968:

Zones for Chile as given in the file zone.tab of the IANA time zone database. 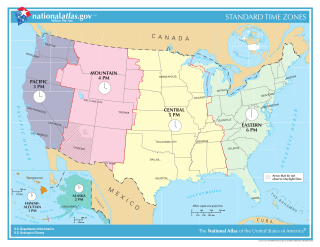 As of 2018, daylight saving time (DST) is permanently observed in Morocco. Previously, time was advanced to UTC+01:00 at 02:00 on the last Sunday of March, and reverted to UTC±00:00, defined as Greenwich Mean Time locally, at 03:00 on the last Sunday of October. This practice was continued through October 2018, after which clocks were permanently advanced. An exception was made during the month of Ramadan during which clocks reverted to UTC+00:00.