The Tipsport Hockey Cup is the national ice hockey cup competition in the Czech Republic. It was first played as the Zepter Hockey Cup in 2000.

PSG Berani Zlín is an ice hockey team in the Czech Extraliga. Their home arena is Zimní stadion Luďka Čajky in Zlín. They won the Extraliga in 2004 and 2014. They were formerly known as Aukro Berani Zlín, PSG Zlín, and HC Hamé Zlín.

The Slovak Tipsport Liga is the highest-level ice hockey league in Slovakia. Since the 2018-19 season, the league also includes two teams from Hungary.In 2009, it was ranked by the IIHF as the fifth strongest league in Europe and in 2012, it was ranked by The Hockey News as the sixth strongest league in the world behind the NHL, KHL, Swedish Hockey League, SM-liiga and Czech Extraliga. However, it has dropped significantly since then, with the German DEL and Austrian EBEL both ranked ahead. 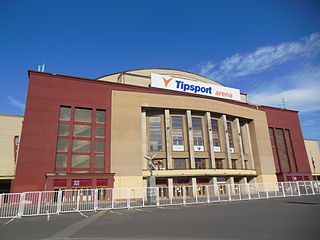 Tipsport Arena is a multi-purpose indoor arena in Prague, Czech Republic, whose naming rights are currently leased to Czech betting company Tipsport. The arena, located on the fairgrounds in the neighbourhood of Holešovice, opened in 1962 as Sportovní hala and has a capacity of 13,150 for ice hockey games. It was the home arena of Czech extraliga team HC Sparta Praha and KHL's HC Lev Praha.

Hockey Club Košice is a professional ice hockey team playing in the Slovak Extraliga and is the most successful hockey team in Slovakia and the former of Czechoslovakia. The team is nicknamed Oceliari, which means Steelers in English. 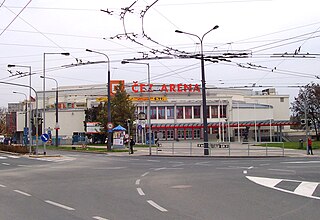 ČSOB Pojišťovna arena is an indoor sporting arena in Pardubice, Czech Republic with maximum capacity of 10 194.

Hokejový Klub Nitra is a professional ice hockey club based in Nitra, Slovakia. The club has been a member of the Slovak Extraliga since the 2003–04 season and winner of Slovak Extraliga from 2015-16 season.

Hokejový Klub Skalica is a professional ice hockey team based in Skalica, Slovakia. It has been a member of the Slovak Extraliga since 1997–98 season, when the squad was promoted from the Slovak 1.Liga. Team is currently playing in the second highest league Slovak 1. Liga in Slovakia.

Mestský Hokejový Klub Žilina is a professional Slovak ice hockey club based in Žilina. The club has won the Slovak league championship in 2006. The team is nicknamed Vlci, it means Wolves in English.

The Czech Hockey Games', also sponsored as Carlson Hockey Games, is an annual ice hockey event held in Czech Republic. It is part of the Euro Hockey Tour. It was previously sponsored as the Pragobanka Cup, the Kajotbet Hockey Games and the Česká Pojišťovna Cup

Tipsport Arena may refer to:

HC 07 Detva is an ice hockey team playing in the Slovak Extraliga, and formed in 2007. They play in the city of Detva, Slovakia at Detva Ice Stadium.

The 2018–19 Slovak Extraliga season is the 26th season of the Slovak Extraliga, the highest level of ice hockey in Slovakia. HK Orange 20 is a project to prepare the Slovakia junior ice hockey team for the IIHF World U20 Championship. The team does not play a complete regular season and cannot advance to the playoffs or get relegated. Since the 2018–19 season, the league also includes two teams from Hungary.