Toin University of Yokohama was established in 1988. It offers degree programs in sports medicine, medical technology, engineering and law. 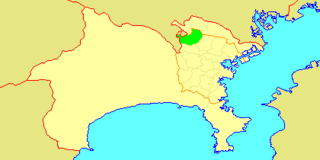 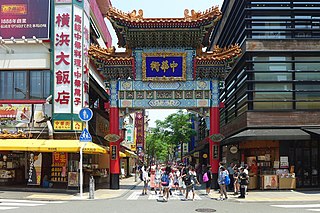 Yokohama Chinatown is located in Yokohama, Japan, which is located just south of Tokyo. It is about 160 years old, with a population of about 3,000 to 4,000. Today, only a few Chinese people still live there, most being from Guangzhou.

The NHK Spring Mitsuzawa Football Stadium is a football stadium in Kanagawa-ku, Yokohama, Japan. It serves as a home ground of Yokohama FC and, on occasion, Yokohama F. Marinos. Until 1999 it had been the home of Yokohama FC's spiritual predecessor, Yokohama Flügels, and also, on occasion, to Kawasaki-based NKK FC The stadium holds 15,454 people.

Shidai-Igakubu Station is a station along the Kanazawa Seaside Line, located in Kanazawa-ku, Yokohama, Japan. It opened on 5 July 1989.

The Port of Yokohama is operated by the Port and Harbor Bureau of the City of Yokohama in Japan. It opens onto Tokyo Bay. The port is located at a latitude of 35.27–00°N and a longitude of 139.38–46°E. To the south lies the Port of Yokosuka; to the north, the ports of Kawasaki and Tokyo.

Yokohama Cultural Gymnasium is an indoor sports arena located in Naka-ku, Yokohama, Japan. The capacity of the arena is 5,000 people and was opened in 1962. 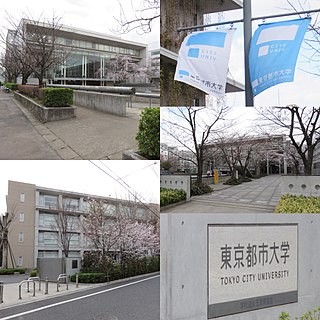 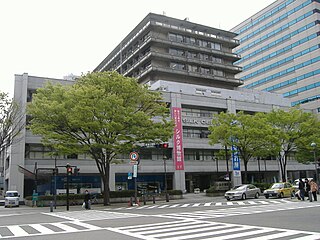 The Yokohama Silk Museum is a museum located in Naka-ku, Yokohama, Japan that covers the silk trade in Japan. The museum displays silk kimono and covers the importance of Yokohama as a silk port. 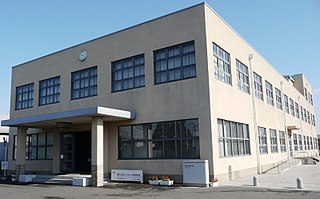 The Nissan Engine Museum is an automobile engine museum run by Nissan Motor Company. The museum is located at the first floor of the guest hall in Yokohama auto plant, Kanagawa-ku, Yokohama, Japan. 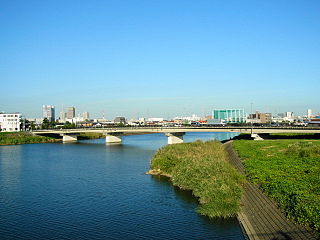 The Tsurumi River is a river in Kanagawa and Tokyo Prefectures on Honshū, Japan. It begins at the confluence of the Onda and Yamoto rivers in Yokohama and flows 22 kilometers before emptying into Tokyo Bay.

Yokohama College of Art and Design is a private university in Aoba-ku, Yokohama, Kanagawa Prefecture, Japan. In 2009, the university was reorganized from a two-year college to a four-year university. Originally established in 1966 as a women's junior college.

Yokohama International Swimming Pool is a swimming venue in Yokohama, Japan. The main pool is converted to a basketball arena in fall and winter by setting up panels on the floor. This sports court can be slippery. This arena is home of the B.League basketball club Yokohama B-Corsairs.

Cosmo Clock 21 is a 112.5 metre tall ferris wheel at the Cosmo World amusement park in the Minato Mirai 21 district of Yokohama, Japan. When it first opened, it was the world's tallest Ferris wheel, until the completion of the 108-metre (354 ft) Igosu 108 in Shiga, Japan, in 1992. 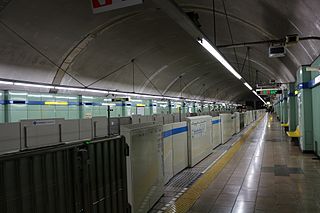 Misuzawa-kamichō Station is an underground metro station located in Kanagawa-ku, Yokohama, Kanagawa, Japan operated by the Yokohama Municipal Subway’s Blue Line. It is 24.8 kilometers from the terminus of the Blue Line at Shōnandai Station.

Kita Shin-Yokohama Station is an subway station on the Blue Line in Kōhoku-ku, Yokohama, Kanagawa Prefecture, Japan, operated by the Yokohama Municipal Subway.

Kozukue Castle is the name for the earthly remains of a castle structure in Kozukue, Kōho-ku ward of Yokohama, Kanagawa Prefecture, Japan.

Toin Gakuen Schule Deutschland was a Japanese international school in Bad Saulgau, Baden-Württemberg, Germany. It opened since many Japanese company employees assigned to work in Germany wanted their children to be prepared for the Japanese school system when they return to Japan. The school had both junior and senior high school sections. Since it was an affiliate of Toin Gakuen, this school was an overseas branch of a Japanese private school, or a Shiritsu zaigai kyoiku shisetsu. The school provided boarding facilities for its students.

Meiji Maru (明治丸) is a Japanese sailing ship that serves as a museum ship in Tokyo. It is displayed at the Etchujima Campus of the Tokyo University of Marine Science and Technology.

Toin University of Yokohama FC are a Japanese football (soccer) club based in Aoba-ku, Yokohama. They play in Division 1 of Kantō Soccer League.