Until the Meiji Restoration, Tokushima Prefecture was known as Awa Province. [3]

In ancient times, Tokushima City belonged to a region known as Myōdō-gun. In the first wave of government consolidation following the abolishment of the fiefdom system and construction of prefectures in 1871, it became known as Myodo Prefecture. At the time, it included the Awa region to the south and the Awaji Island regions as well. In 1873 it further incorporated the region currently occupied by Kagawa Prefecture in its borders.

On March 2, 1880, Myodo Prefecture fully separated from Kochi Prefecture to be inaugurated as Tokushima Prefecture.

The Sanuki Mountains run along the northern border of the prefecture.

As of April 1, 2012, 9% of the total land area of the prefecture was designated as Natural Parks, namely the Setonaikai National Park; Muroto-Anan Kaigan and Tsurugisan Quasi-National Parks; and Chūbu Sankei, Dochū-Kōtsu, Hashikura, Higashi Sankei, Okumiyagawa-Uchidani, and Ōasayama Prefectural Natural Parks. [4]

See also: List of cities in Tokushima Prefecture by population

Tokushima depends on agriculture, forestry and fisheries. The percentage of agricultural workers and productivity is the second largest in Shikoku next to Kochi. Rice fields occupy the lower region of the Yoshino River and the small, narrow plains along the shore. Much of the remaining land is used for vegetables and flowers. The prefecture is the nation's largest supplier of cauliflower and lotus roots, and the fourth largest producer of carrots. Japanese indigo is only produced here.

Northern Tokushima's growth was accelerated by the completion of the Akashi Channel Bridge, which completes the road connection from Tokushima to Kobe. Industrial development continues around the Tokushima and Naruto districts. In particular, Itano District's Aizumi Town and Kitajima Town have experienced rapid growth, which has led to a proposed merger of the towns of Itano District into Itano City in the future.

Tokushima abounds in agricultural resources and is the site of large-scale production of many different types of vegetables. The plains north of the Yoshino River are particularly fertile and the produce here is often shipped to mainland Japan in the areas around Kobe, Osaka and Kyoto. Produce from Tokushima always claims top shares in markets in the Kansai region and particularly prominent are Naruto sweet potatoes, the citrus fruit "sudachi", lotus roots and strawberries.

The lack of goods heading to Tokyo has led to a relatively low national profile for local Tokushima brands.[ citation needed ] To combat this, the local Tokushima government now sends the "Fresh! Tokushima" moving display about the country with its mobile kitchen set to increase general awareness of the local food available in Tokushima Prefecture.

Further, the sports teams listed below are based in Tokushima.

Tokushima's prefectural symbol is a stylized combination of the hiragana for to and ku, the first two characters in the hiragana spelling of the prefecture's name. 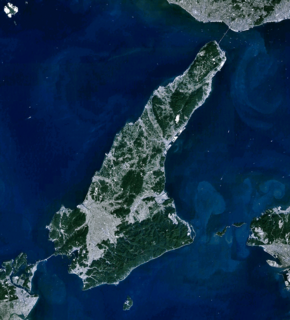 Awa Province was an old province of Japan in the area that is today Tokushima Prefecture on Shikoku. Awa was bordered by Tosa, Sanuki, and Iyo Provinces. It was sometimes called Ashū (阿州). 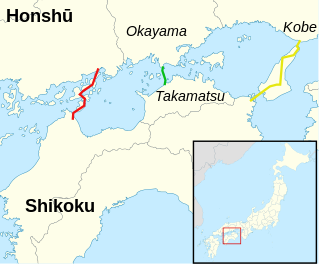 The Ōnaruto Bridge is a suspension bridge on the Kobe-Awaji-Naruto Expressway connecting Minamiawaji, Hyogo on Awaji Island with Naruto, Tokushima on Ōge Island, Japan. Completed in 1985, it has a main span of 876 metres (2,874 ft). Although it is one of the largest bridges in the world, it is dwarfed by the Akashi-Kaikyo Bridge, which is on the same route. In 2004, 6.8 million cars and trucks crossed this bridge, translating into a daily average of about 18,600.

This page lists Japan-related articles with romanized titles beginning with the letter A. For names of people, please list by surname. Please also ignore particles when listing articles.

Naruto is a Japanese manga, anime and video game franchise.

The Kōtoku Line is a railway line in northeastern Shikoku, Japan that connects the prefectural capitals Takamatsu (Kagawa) and Tokushima (Tokushima). Shikoku Railway Company owns and operates the line, whose name comes from the characters in the cities that the line connects: Takamatsu (高松) and Tokushima (徳島). 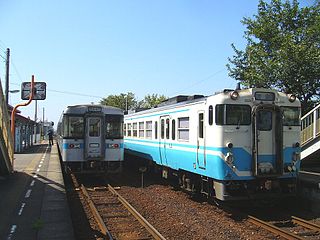 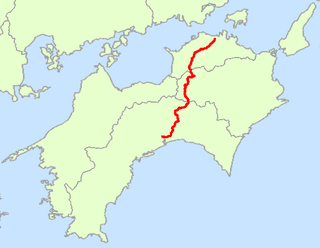 National Route 32 is a national highway connecting Takamatsu and Kōchi in Japan.

Japan Median Tectonic Line, also Median Tectonic Line (MTL), is Japan's longest fault system. The MTL begins near Ibaraki Prefecture, where it connects with the Itoigawa-Shizuoka Tectonic Line (ISTL) and the Fossa Magna. It runs parallel to Japan's volcanic arc, passing through central Honshū to near Nagoya, through Mikawa Bay, then through the Inland Sea from the Kii Channel and Naruto Strait to Shikoku along the Sadamisaki Peninsula and the Bungo Channel and Hōyo Strait to Kyūshū.

The Mugi Line is a railway line in southeastern Tokushima Prefecture, Japan, owned and operated by Shikoku Railway Company. It connects the prefectural capital of Tokushima with the town of Kaiyō in Kaifu District. The line's official nickname is "Awa-Muroto Seaside Line", but this is rarely used by local residents as it does not directly service Muroto, the intended destination of the line. 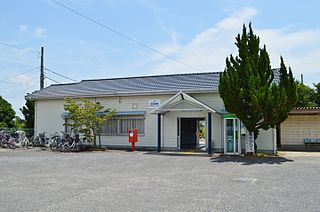 Chūden Station is a railway station on the Mugi Line in Komatsushima, Tokushima Prefecture, Japan. It is operated by JR Shikoku and has the station number "M05".