Responding to a local disturbance, the Dekarangers apprehend Abared, Abare Blue and Abare Yellow, who were in the middle of chasing a raven. After interrogating the three Abarangers, the Dekarangers are ordered to bring them to the Deka Room, where they are all briefed on the shape-shifting Ginjifuan Kazak. The Abarangers explain that they were contacted by a curry shop owner friend of theirs who is being targeted by Kazak; hence their short battle with Kazak, who changed into a raven and fled while the Abarangers were arrested. Despite Doggie Kruger's suggestion to investigate the curry shop, both Super Sentai groups get into a heated argument over their methods of justice. However, when Yukito discovers a weak spot on Doggie's back and uses his chiropractic skills to fix it, Doggie suggests for Ban to team up with Ryoga.

Meanwhile, at a meeting with Kazak, Agent Abrella breaks open a red orb to unleash Trinoid #0 Saunaginnan, who had been sealed away by Mikela as he was deemed too powerful. Saunaginnan demonstrates his power by reviving the previously deleted Reversian Succubus and Speckionian Genio. However, Saunaginnan quickly wears out his energy, as he is missing two gingko nut batteries that power his abilities. Kazak takes the two revived Alienizers to retrieve the gingko nuts, giving each of them a piece of the shattered orb.

Ban and Ryoga arrive at Dino House, which has grown to become the country's largest curry shop. There, they meet the Trinoid Yatsudenwani, who has replaced Mr. Sugishita as the president of the restaurant chain. He explains to the duo that he had kept the orb that contained Saunaginnan when it was stolen, but he reveals that he has the two gingko nuts. Kazak suddenly appears and attacks Yatsudenwani before Deka Red and Aba Red interfere. However, during the fight, the clock strikes 11:00 and Aba Red suddenly leaves the fight to make a phone call to his niece Mai, who is currently taking up acting classes in Hollywood. This causes Kazak to defeat the two warriors and leave with the gingko nuts, announcing his plans to resurrect all of the deleted Alienizers and Dezumozorlya. Meanwhile, Succubus and Genio wreak havoc in two different places in town. Deka Blue, Deka Green and Deka Break assume they can easily defeat Genio by hitting his chest, but to no effect. Abare Blue pinpoints a weakness in his third vertebra, enabling the four warriors to once again delete him. Jasmine, Umeko and Ranru prepare to battle Succubus, but the Alienizer spits out a gel that clogs up their transformation devices. After distracting Succubus with some cosplaying tactics, Ranru finds a formula to dissolve the gel, enabling all three to transform and defeat Succubus. Both Genio and Succubus are reduced to the orb chunks that were in their possession. Deka Red and Aba Red once again face Kazak, but they both end up fighting each other over Aba Red's phone call. While Kazak's platoon of Anaroids massage him, Aba Red explains to Deka Red that he made a promise to call Mai before her audition. This gives Kazak the opportunity to throw both red warriors off the building. However, some last-minute teamwork brings them both back in the fight, which is suddenly interrupted by Asuka playing his harmonica. Enraged by the presence of evil on Another Earth, Abare Black attacks Kazak, who is then forced to retreat into the orb chunk he carries.

Meanwhile, at a cave, Saunaginnan becomes fully charged, causing the orb chunks to glow into a trail while Earth becomes engulfed in a thick fog. The Dekarangers and Abarangers follow the trail, but are confronted by Kazak and Saunaginnan, with the revived Ben-G, Milibar and Bon-Goblin and an army of Anaroids. Kazak sends the heroes in confusion by shape-shifting into Numa-O and Hurricane Red. The fog gets thicker as the door to hell opens in the sky, but as everyone anticipates the arrival of Dezumozorlya, Mikoto Nakadai and TopGaler come out instead. After Doggie enters the fight, both Dekarangers and Abarangers shuffle members to defeat the revived Alienizers. The heroes then use the D-Bazooka and Superior Dino Bomber to delete Kazak and Saunaginnan. Kazak, however, dodges the blast and boards his Heavy Industrial Machine PalletteView while Saunaginnan is resurrected into a giant. Super Dekaranger Robo and Killer AbarenOh destroy the two giants with a combined Gatling Punch and Gatling Drill Spin attack. As a side-effect of defeating Saunaginnan, Mikoto must return to the afterlife, but not before telling Asuka to give his regards to his daughter.

Back at Deka Base, the Dekarangers and Abarangers celebrate their victory with a party hosted by Yatsudenwani, who irritates the Dekarangers with his singing. It is later on revealed that Doggie was one of Dino House's regular customers. Meanwhile, the girls and Emiri enjoy a bubble bath before Yatsudenwani barges in. They chase him around the Deka Room before everyone stops to have a group photo taken.

The Super Sentai Series is a Japanese superhero team metaseries of television series and films produced by Toei Company, and Bandai, and aired by TV Asahi. The shows are of the tokusatsu genre, featuring live action characters and colorful special effects, and are aimed at children. Super Sentai airs alongside the Kamen Rider series in the Super Hero Time programming block on Sunday mornings. In North America, the Super Sentai Series is best known as the source material for the Power Rangers franchise.

Emi Shinohara is a Japanese voice actress and singer employed by 81 Produce who is most known for voicing Sailor Jupiter in the original Japanese anime of Sailor Moon and Kushina Uzumaki in Naruto Shippuden. She was born in Fukushima Prefecture and raised in Nagano. She is married to tokusatsu actor Hiroshi Watari. She shares a birthday with fellow Sailor Moon star Rica Fukami, who voiced Sailor Venus. 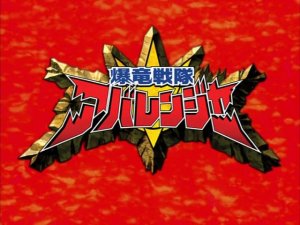 Kōzō Shioya is a Japanese actor, voice actor and narrator from Kagoshima Prefecture. He is represented by Aoni Production. His younger brother Yoku Shioya is also an actor and voice actor.

Yosuke Ito, also known as Lito, is a Japanese actor and singer. He is best known for his role as Senichi "Sen-chan" Enari/Deka Green in the 2004 TV series Tokusou Sentai Dekaranger. Itou is affiliated with Actoli Llc.

The Abarangers are fictional protagonists in the Super Sentai series Bakuryū Sentai Abaranger. They use a type of spiritual energy, Dino Guts, to draw power from their Bakuryū partners and transform themselves. Each member can shift into Abare Mode, with the diamond pattern on their costume changing to a blade.

The Wicked Lifeforms Evolien are the foes of the Abarangers in the Super Sentai series Bakuryū Sentai Abaranger. They are the Wicked Life Clan, that came from Dino Earth. They dwelled within a castle-like structure, the Invasion Garden. 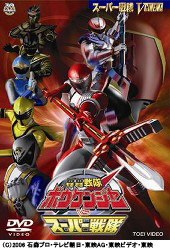 Yasuhiko Imai is a Japanese stunt man and suit actor affiliated with Japan Action Enterprises. He has been cast mainly in the Super Sentai series.

Hirofumi Fukuzawa is a Japanese actor. He is an affiliate of Red Action Club and a former affiliate of Japan Action Enterprise. He is most known for his work in the Super Sentai series as a suit actor. He is the husband of fellow suit actress Naoko Kamio.

Hidenari Ugaki is a Japanese actor and voice actor from Tokyo. He is currently attached to 81 Produce. He is best known for his roles in Mobile Fighter G Gundam, the TV Tokyo edition of Teenage Mutant Ninja Turtles, the 2005 Doraemon series, and the Yakuza video game series. 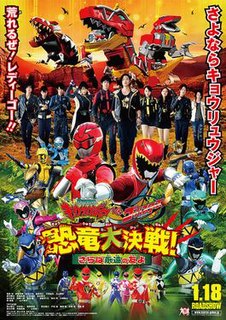 Zyuden Sentai Kyoryuger vs. Go-Busters: The Great Dinosaur Battle! Farewell Our Eternal Friends is a Japanese superhero film released on January 18, 2014. It is the annual "VS Series" movie, a crossover between the current and most recent Super Sentai series' casts, Zyuden Sentai Kyoryuger and Tokumei Sentai Go-Busters. In addition, the cast of the upcoming series Ressha Sentai ToQger make cameo appearances in the film, as do cast members from prior series Kyōryū Sentai Zyuranger and Bakuryū Sentai Abaranger. Its footage was used for the upcoming episode in season 2 of Power Rangers Beast Morphers in February 22, 2020.

Koichiro Nishi is a Japanese actor who is affiliated with CES. He played the role of Ryoga Hakua in the 2003 Super Sentai TV series Bakuryū Sentai Abaranger.