Tokyo Bay (東京湾, Tōkyō-wan) is a bay located in the southern Kantō region of Japan, and spans the coasts of Tokyo, Kanagawa Prefecture, and Chiba Prefecture. Tokyo Bay is connected to the Pacific Ocean by the Uraga Channel. Its old name was Edo Bay (江戸湾, Edo-wan). The Tokyo Bay region is both the most populous and largest industrialized area in Japan. [1] [2] [3] [4] [5]

In ancient times, Japanese knew Tokyo Bay as the uchi-umi (内海) or "inner sea". By the Azuchi–Momoyama period (1568–1600) the area had become known as Edo Bay, a reference to the city of Edo. The bay took its present name of Tokyo Bay in modern times, after the Imperial court moved to Edo and renamed the city Tokyo in 1868. [6]

In a narrow sense, Tokyo Bay is the area north of the straight line from Cape Kannon on the west of Miura Peninsula to Cape Futtsu on the east Bōsō Peninsula. This area covers about 922 square kilometres (356 sq mi) in 2012, reclamation projects continue to slowly shrink the bay. [4] [5]

In a broader sense, Tokyo Bay includes the Uraga Channel. By this definition the bay opens from an area north of the straight line from Cape Tsurugisaki on the east of Miura Peninsula to Cape Sunosaki on the west of the Boso Peninsula. This area covers about 1,100 square kilometres (420 sq mi). The area of Tokyo Bay combined with the Uraga Channel covers 1,500 square kilometres (580 sq mi). [3] [4] [5]

The shoal between Cape Futtsu in Chiba Prefecture and Cape Honmaku in Yokohama is known as Nakanose, and has a depth of 20 metres (66 ft). [5] North of this area the bay has a depth of 40 metres (130 ft) and an uncomplicated underwater topography. Areas south of Nakanose are significantly deeper moving towards the Pacific Ocean.

The only natural island in Tokyo Bay is Sarushima (0.055 square kilometres (0.021 sq mi)) at Yokosuka, Kanagawa Prefecture. Sarushima was one of the locations fortified with coastal artillery during the Bakumatsu period and was subsequently incorporated into the Tokyo Bay Fortress during the Meiji period. The Imperial Japanese Navy maintained a degaussing station on the island until the end of World War II. The island is now uninhabited and is a marine park. [7]

Many artificial islands were built as naval fortifications in the Meiji and Taishō periods. After World War II these islands were converted to residential or recreational use. Odaiba, also known as Daiba, was one of six artificial islands constructed in 1853 as a fortification to protect the Tokugawa shogunate at Edo, and was known as the Shinagawa Daiba. After World War II Odaiba was incorporated into Tokyo and redeveloped for commercial and recreational use. [8] Before World War II, Yumenoshima was planned as an airfield (one of the largest in the world at the time), but after the US military expansion of Haneda Airport following World War II, the plan of the airfield fell through. The island briefly opened as a public beach before being repurposed and used as a landfill between 1957 and 1967 to dispose of the large quantities of garbage from the Tokyo Metropolitan Area. The reclaimed land now hosts Yumenoshima Park with numerous recreational facilities. Hakkei Island (0.24 square kilometres (0.093 sq mi)), formerly Landfill Number 14, was constructed in 1985 and is home to Yokohama Hakkeijima Sea Paradise. [9] Other artificial islands include Heiwa, Katsushima, Shōwa, Keihin, and Higashiōgi islands.

Land reclamation has been carried out along the coast of Tokyo Bay since the Meiji period. Areas along the shore with a depth of less than 5 metres (16 ft) are simplest to carry out landfill, and sand from the floor of Tokyo Bay is used for these projects. The topography of the shoreline of Tokyo Bay differs greatly from that of the pre-modern period due to ongoing land reclamation projects. [5] Tokyo Bay includes about 249 square kilometres (96 sq mi) of reclaimed land area in 2012. Aggregate household waste production is enormous in Greater Tokyo, there is little room for traditional garbage disposal sites; waste is rigorously sorted at the household, much of it is turned into ash and further recycled into bay landfill.

The Tokyo Bay Aqua-Line bridge-tunnel crosses Tokyo Bay between Kawasaki and Kisarazu; Tokyo-Wan Ferry also crosses the bay toward the Uraga Channel between Kurihama (in Yokosuka) and Kanaya (in Futtsu on the Chiba side).

Tokyo Bay was a historical center of the fishing industry, a source of shellfish, and other aquaculture. These industries decreased with the industrialization of the Tokyo Bay region early in the 20th century, and almost completely ceased with the construction of the Keihin and Keiyō industrial zones directly after World War II. [1]

Industrial zones on Tokyo Bay were developed as early as the Meiji era (1868–1912). The Keihin Industrial Zone was built on reclaimed land in Kanagawa Prefecture to the west of Tokyo. This was expanded to the Keiyō Industrial Zone in Chiba Prefecture along the north and east coasts of Tokyo Bay after World War II. The development of the two zones has resulted in the largest industrialized area in Japan. [5] The large-scale industrial zones of the coastal Tokyo region have caused significant air and water pollution. [1]

The Port of Yokosuka contains the naval bases of the Japan Maritime Self-Defense Force and the United States Forces Japan.

Tokyo Bay was the venue for the Perry Expedition, which involved two separate trips from 1853 to 1854 between the United States and Japan by Commodore Matthew Perry (1794–1858). Perry sailed on his four "Black Ships" into Edo Bay on July 8, 1853, and began negotiations with the Tokugawa shogunate that led to a peace and trade treaty between the United States and Japan in 1854. [10] [11] 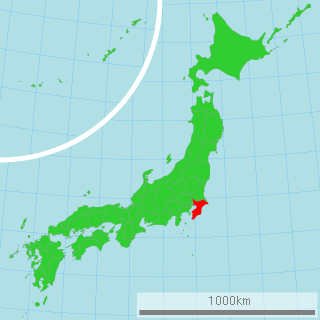 Chiba Prefecture is a prefecture of Japan located in the Kantō region, and the Greater Tokyo Area. The sixth most populous prefecture, and 27th largest by land area, Chiba is on the east coast of Honshu and largely consists of the Bōsō Peninsula, which encloses the eastern side of Tokyo Bay. Its capital is the city of Chiba. 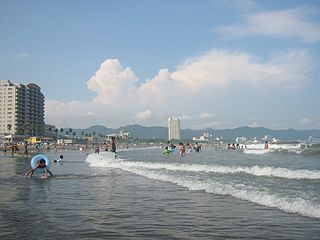 Kamogawa is a city located in Chiba Prefecture, Japan. 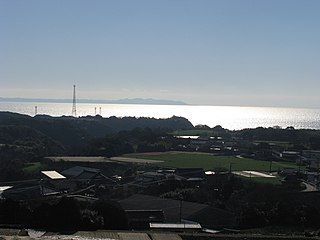 The Uraga Channel is a waterway connecting Tokyo Bay to the Sagami Gulf. It is an important channel for ships headed from Tokyo, Yokohama, and Chiba to the Pacific Ocean and beyond. 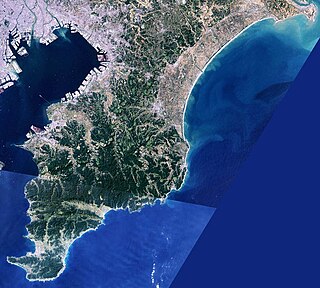 The Bōsō Peninsula is a peninsula that encompasses the entirety of Chiba Prefecture on Honshu, the largest island of Japan. It forms the eastern edge of Tokyo Bay, separating it from the Pacific Ocean. The peninsula covers approximately 5,034 square kilometres (1,944 sq mi).

Sakura is a city located in Chiba Prefecture, Japan.

Kujūkuri Beach is a sandy beach that occupies much of the northeast coast of the Bōsō Peninsula in Chiba Prefecture, Japan. The beach is approximately 60 kilometres (37 mi) long, making it the second longest beach in Japan. Kujūkuri Beach is a popular swimming and surfing destination for inhabitants of Greater Tokyo. The beach is protected as part of Kujūkuri Prefectural Natural Park. 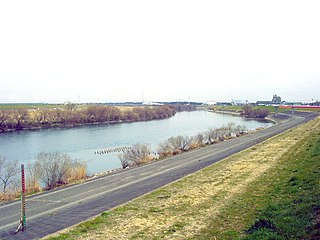 The Edo River is a river in the Kantō region of Japan. It splits from the Tone River at the northernmost tip of Noda City in the Sekiyado district, crosses through Nagareyama and Matsudo, and empties into Tokyo Bay at Ichikawa, Chiba Prefecture. The Edo forms the borders between Tokyo, Chiba, and Saitama prefectures. The Edo River is 59.5 kilometres (37.0 mi) long.

Tokyo-Wan Ferry is a Japanese car ferry operator. Its line links Yokosuka, Kanagawa and Futtsu, Chiba, across Tokyo Bay in some 40 minutes. Headquartered in Yokosuka, the company started its service from 1957. The ferry started to accept PASMO smart cards from June 2008.

Cape Myōgane is a cape located on the border of Futtsu and Kyonan, Chiba, Japan, where Mount Nokogiri on its western end precipitously falls into the Uraga Channel to Tokyo Bay. 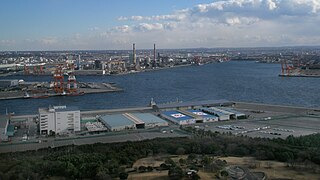 The Port of Chiba is the largest seaport in Japan, located in Chiba Prefecture on the interior of Tokyo Bay. The Port spans 24,800 hectares across the cities of Ichikawa, Funabashi, Narashino, Chiba, Ichihara, and Sodegaura. 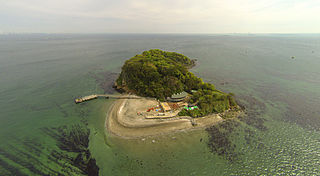 Sarushima, is a small island located off Yokosuka, Kanagawa in Japan. It is the only natural island in Tokyo Bay. Sarushima was used as a battery by the Tokugawa shogunate during the Edo period, and after the Meiji Restoration in 1868, the island was developed as part of the Yokosuka Navy Yard. 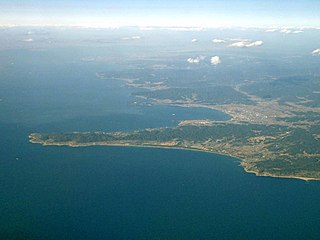 Cape Suno is a cape on the Pacific Ocean, in the city of Tateyama, Chiba Prefecture, Japan. The cape is located at the southwestern point of Bōsō Peninsula on the island of Honshu, and marks the point between the inner and outer parts of the peninsula.

The Obitsu River is a river in Kimitsu, Kisarazu, and Sodegaura, Chiba Prefecture, Japan. The river is 88 kilometers (55 mi) in length and has a drainage area of 273.2 square kilometers (105.5 sq mi).

The Shimōsa Plateau is a plateau on the Kantō Plain in central Honshu, Japan. The plateau covers most of northern Chiba Prefecture. The plateau was historically richly agricultural, but in the 20th century the western and central Shimōsa Plateau became one of the major industrial areas of Japan, as well as a large-scale bedroom community of the Tokyo Metropolitan Region. Narita International Airport is located in the center of the Shimōsa Plateau. 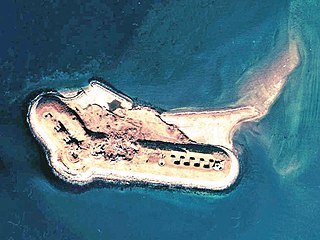 Tokyo Bay Fortress was the name of a group of coastal fortifications built to guard the entrance to Tokyo Bay and thus the city of Tokyo from attack from the sea. These gun batteries and fortifications ceased to be used after the end of World War II.