Toledo (Oruro) is a small town in Bolivia.

The Congress of Vienna of 1814–1815 was one of the most important international diplomatic conferences in European history, reconstituting the European political order after the downfall of the French Emperor Napoleon I. It was a meeting of ambassadors of European states chaired by Austrian statesman Klemens von Metternich, and held in Vienna from November 1814 to June 1815.

Whitfield is a hamlet in South Gloucestershire, England.

Kateh is an Iranian rice dish from the Caspian region, which, unlike Polo/Cholo, is sticky and does not have Tahdig, though it does form a crust on the bottom where the salt and oil collect. Generally, Kateh needs half the cooking time of Polo-style rice and has a denser flavor due to the addition of butter or oil in the cooking process.

The A4061 is the main road linking Bridgend with Hirwaun via the Ogmore and Rhondda Valleys in South Wales. It is a mix of streets connecting former mining communities, and mountain passes built as relief work for unemployed miners.

The A4107 road is an A road in Neath Port Talbot County Borough, Wales. It begins in Port Talbot and heads up the Afan Valley in a north easterly direction. It then continues over the moors eastwards until it connects with the A4061 road south west of Treorchy in the Rhondda Valley.

The Memorial to Heroes of the Marine Engine Room is a granite monument located on St. Nicholas Place, at the Pier Head, in Liverpool, England.

U-69,593 is a drug which acts as a potent and selective κ1-opioid receptor agonist. In animal studies it has been shown to produce antinociception, anti-inflammation, anxiolysis, respiratory depression, and diuresis, while having little effect on gastrointestinal motility. It also inhibits the peripheral, though not central secretion of oxytocin and vasopressin in rats.

Autumn Ridge is a neighborhood in southeastern Lexington, Kentucky, United States. Its boundaries are I-75 to the east, Barnard Drive to the south, Todds Road to the west, and Vero Court to the north.

The Victoria Gallery & Museum (VG&M) is an art gallery and museum run by the University of Liverpool in Liverpool, Merseyside, England.

Zalug is a settlement in the municipality of Prijepolje, Serbia. According to the 2002 census, the settlement has a population of 1047 people.

Price Town is situated 9 miles north of the County Town of Bridgend on the A4061 road in the upper reaches of the Cwm Ogwr Fawr, Wales. It was developed to provide accommodation for the rapidly increasing work force of the Wyndham and Ocean Western Collieries. Today Price Town is regarded as part of the village Nantymoel.

Yersinia bercovieri is a Gram-negative species of enteric bacteria.

The First Cabinet of Napoleon I was appointed by the Emperor Napoleon I upon the establishment of the First French Empire on 18 May 1804, replacing the Cabinet of the Consulate. It was succeeded by the French Provisional Government of 1814 following the downfall of Napoleon and the abolition of the Empire.

Upton Township is a township in Texas County, in the U.S. state of Missouri. 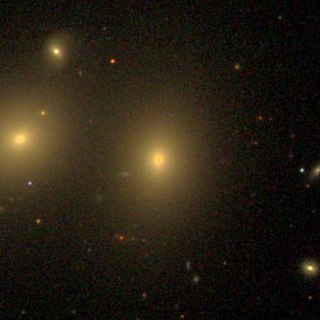 NGC 4055 is an elliptical galaxy located 310 million light-years away in the constellation Coma Berenices. It was discovered by astronomer William Herschel on April 27, 1785. It was rediscovered by John Herschel on April 29, 1832. It is listed both as NGC 4061 and NGC 4055. NGC 4055 is a member of the NGC 4065 Group and forms an interacting pair with its companion, NGC 4065 as evidenced by distortions in their optical isophotes.