Tomàs Buxó i Pujadas (1882 in Barcelona – 1962) was a Catalan composer. He studied at the Escola Municipal de Música of Barcelona with Lluís Millet. Buxó was one of the generation of young composers whose works were stamped with Catalan nationalism in the 1910s. [1] [2] He is particularly noted for his settings of Jacint Verdaguer. [3]

Catalonia is an autonomous community in Spain on the northeastern corner of the Iberian Peninsula, designated as a nationality by its Statute of Autonomy. Catalonia consists of four provinces: Barcelona, Girona, Lleida, and Tarragona. The capital and largest city is Barcelona, the second-most populated municipality in Spain and the core of the sixth most populous urban area in the European Union. It comprises most of the territory of the former Principality of Catalonia. It is bordered by France (Occitanie) and Andorra to the north, the Mediterranean Sea to the east, and the Spanish autonomous communities of Aragon to the west and Valencia to the south. The official languages are Catalan, Spanish, and the Aranese dialect of Occitan.

Lluís Millet i Pagès was a Spanish Catalan composer, musician and co-founder of Orfeó Català in 1891.

La mà de Guido is a Catalan music publishing house in Barcelona Spain founded in 1986 by the composer and musicologist Llorenç Balsach.

Jacint Verdaguer i Santaló was a Spanish writer, regarded as one of the greatest poets of Catalan literature and a prominent literary figure of the Renaixença, a cultural revival movement of the late Romantic era. The bishop Josep Torras i Bages, one of the main figures of Catalan nationalism, called him the "Prince of Catalan poets". He was also known as mossèn (Father) Cinto Verdaguer, because of his career as a priest, and informally also simply "mossèn Cinto".

Passeig de Sant Joan is a major avenue in the Eixample and Gràcia districts of Barcelona. It was named after an older street carrying this name, also known as Passeig Nou, built in 1795 around the glacis of the Ciutadella fortress. 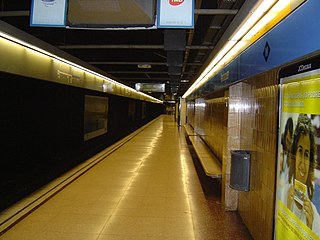 Verdaguer is a station in the Barcelona metro network, located under Plaça de Mossèn Jacint Verdaguer, in Eixample, named after the Catalan poet Jacint Verdaguer. It's served by L4 and L5. 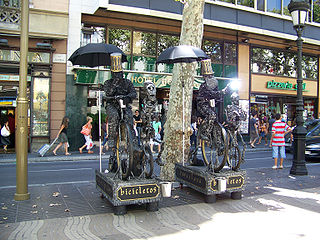 Barcelona'sculture stems from the city's 2000 years of history. To a greater extent than the rest of Catalonia, where Catalonia's native Catalan is more dominant, Barcelona is a bilingual city: Catalan and Spanish are both official languages and widely spoken. Since the arrival of democracy, the Catalan culture has been promoted, both by recovering works from the past and by stimulating the creation of new works.

Montjuïc Cemetery, known in Catalan as Cementiri del Sud-oest or Cementiri de Montjuïc, is located on one of the rocky slopes of Montjuïc hill in Barcelona.

Sebastià Juan Arbó was a Spanish novelist and playwright. He wrote in Catalan and Spanish. He was born in San Carlos de la Rapita on October 28, 1902 and died in Barcelona on January 2, 1984. His work includes novels, drama, biographies and translations. He was an honorary member of the Association of Writers in the Catalan Language. In 1948 he won the Premio Nadal.

Plaça de Mossèn Jacint Verdaguer is a square in the Eixample district of Barcelona, Catalonia, Spain. It lies in the intersection between Avinguda Diagonal, the city's main avenue, and Passeig de Sant Joan, in Dreta de l'Eixample, not far from the Sagrada Família.

Joan Oliver i Sallarès, also known by his pseudonym Pere Quart, was a Catalan poet, playwright, literary manager, translator, narrator, and journalist. He is considered one of the most important twentieth-century writers of Catalonia.

Antoni Massana i Bertran was a Catalan Jesuit priest and composer. He was maestro de capilla at the Church of the Jesuits, Sagrat Cor de Jesús, at the Col·legi Casp, Barcelona.

Tomàs Milans i Godayol was a Catalan composer. He was the son of Marc Antoni Milans i Macià and Marianna Godayol. He was mestre de capella at Girona Cathedral.

Joan Dotras i Vila was a Catalan composer and pedagogue. He was best known as a zarzuela composer. He taught at the Escuela Municipal de Música and the Liceo in Barcelona.

Lluís Solà i Sala is a Catalan poet, playwright and translator.

Josep Soler i Sardà is a Spanish composer, writer and music theorist, one of the main Catalan members of the Generación del 51. He studied composition and orchestration with Cristòfor Taltabull, and was also a pupil of René Leibowitz in Paris.

Vil·la Joana is a masia located in Vallvidrera in the middle of Collserola Natural Park. It is a two storey building with a watchtower and lateral galleries. One of its most distinctive elements is the clock on the main façade. 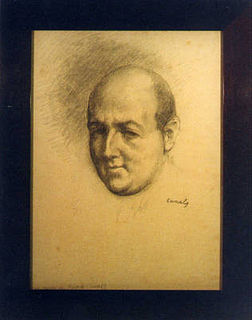 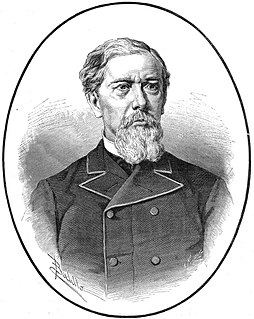 Antonio López y López, 1st Marquess of Comillas, GE, OIC, was a Spanish businessman and shipping magnate. He was the founder of a number of important Spanish companies.