Řepka began his career with Baník Ostrava, where he played from 1990 to 1995. He then joined Sparta Prague, where he spent almost three years, before moving to Italian Serie A club Fiorentina. He joined Premier League club West Ham United early in Glenn Roeder's tenure as manager, for a then club record fee of £5.5 million in September 2001. [1]

Řepka was sent off on his West Ham debut for two bookable offences, [2] missed a match through suspension, and was sent off again in the third match he played for the club. [3] He went on to form a central defensive partnership with Christian Dailly before the club's relegation to the second-tier Championship, although he gained a reputation for his disciplinary record, and received ten yellow cards that first season.

After relegation at the end of the 2002–03 season, the appointment of Alan Pardew as manager saw Řepka move to right-back. In the summer of 2005, after the club had regained their Premier League status, he was re-signed by Pardew on a two-year contract, albeit on reduced terms, but left the club in January 2006 to return to the Czech Republic to be with his family.[ citation needed ] He played his final match for West Ham on 23 January against Fulham. [4]

In 2006, Řepka returned to Sparta Prague. In 2009, he won the Personality of the League award at the Czech Footballer of the Year awards. [5]

After the termination of his contract with Sparta Prague, he signed with Dynamo České Budějovice, becoming a stable member of the first team and helped his team to avoid relegation in the 2011–12 season. However, his contract was terminated by his team in November 2012. After negotiations with 1. FK Příbram had broken down, he accepted a non-player role with Baník Most. [7] After three months, Řepka quit his manager role due to disagreements with new club leaders. [8]

After making his international debut for Czechoslovakia in June 1993 against the Faroe Islands, Řepka played 45 times for the Czech Republic between 1994 and 2001. He missed UEFA Euro 1996 due to a two-match suspension for a red card. [9] However, he played for his country at Euro 2000, where the Czech Republic was eliminated in the group stage.

Řepka is notorious for his lack of self-control, aggression and disciplinary problems. [10] During his professional career, he received twenty [11] red cards (see table below). One scandal included attacking game officials and a TV cameraman in September 2007. [12] [13]

In August 2018, Řepka received a six-month jail sentence for advertising sexual services on the internet in the name of his ex-wife. [18] The sentence was later reduced to a community order.

René Bolf is a Czech former professional footballer who played as a centre back. He spent most of his club career at FC Baník Ostrava, also playing in his home country for Sparta Prague. During a three-year stay in France, he played for Ligue 1 side AJ Auxerre. 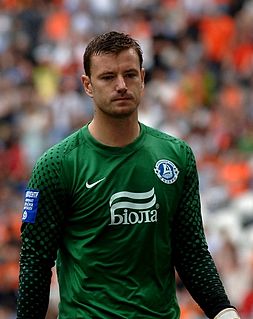 Jan Laštůvka is a Czech professional footballer who plays as a goalkeeper for Baník Ostrava.

The 2007–08 Czech First League, known as the Gambrinus liga for sponsorship reasons, was the fifteenth season of Czech Republic's top-tier of football. The season started on August 4, 2007 and concluded on May 17, 2008.

Bořek Dočkal is a Czech professional footballer who plays as a midfielder and captains Sparta Prague. He has previously spent time with Turkish side Konyaspor and Norwegian side Rosenborg. Dočkal represented the Czech Republic at youth international level, and was the captain of the under-21 team, and has later been capped with the senior team. 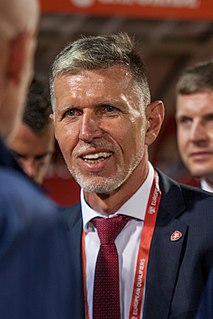 Jaroslav Šilhavý is a Czech football manager and former player. He was born in Plzeň.

Jan Holenda is a Czech former professional footballer, who played as a striker. Holenda was a journeyman, having played for eight different clubs in the Czech First League, as well as three in the Russian Premier League. He won league titles with Slovan Liberec (2005–06) and Viktoria Plzeň. 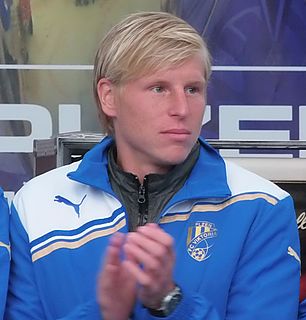 František Rajtoral was a Czech professional footballer who played as a right winger or right-back. He last played for Turkish club Gaziantepspor, and was best known for his stint at Viktoria Plzeň. He was a member of the Czech Republic national football team.

The 2011-12 season was Dukla Prague's first season in the Gambrinus liga after they were promoted from the Czech 2. Liga during the previous season.

The 2012-13 season was Dukla Prague's second consecutive season in the Czech First League.

Tomáš Požár is a retired Czech football defender. He played in the Gambrinus liga for numerous clubs, making over 50 league appearances in total. In 2012, he was working as sporting director for the youth team of Bohemians 1905. In 2015, he became chief of scouting at AC Sparta Prague and in October 2016 Sparta's new sporting director. 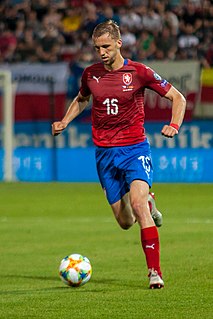 Tomáš Souček is a Czech professional footballer who plays as a defensive midfielder for Premier League club West Ham United and the Czech Republic national team. 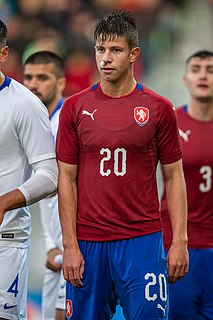 Adam Hložek is a Czech professional footballer who plays as a forward for Czech First League club Sparta Prague and the Czech Republic national team.

The 2019–20 season was SK Slavia Prague's 27th season in the Czech First League. Slavia successfully defended their domestic title, winning the Czech First League for the sixth time, whilst in the Czech Cup they were knocked out in the Fourth Round by Baník Ostrava. In the UEFA Champions League, Slavia finished bottom of their group, which included Internazionale, Borussia Dortmund and Barcelona, with 2 points.

The 2019–20 Czech First League, known as the Fortuna liga for sponsorship reasons, is the 27th season of the Czech Republic's top-tier football league. The defending champions are Slavia Prague, who won their fifth Czech title in previous season. This season is the second one with a new league structure in which 16 clubs play each other home and away, until the league is split up in championship, Europa League and relegation groups.

The 2020–21 Czech First League, known as the Fortuna liga for sponsorship reasons, will be the 28th season of the Czech Republic's top-tier football for professional clubs since its establishment in 1993. Slavia Prague are the defending champions, having won their twentieth league title the previous season, their third in the last four years. The season was initially scheduled to start on 11 July but was delayed until 21 August as a consequence of the postponement of the previous season's conclusion due to the outbreak of COVID-19. The first half of the season will only have 15 rounds, finishing on 19 December, and the spring half will commence on 29 January 2021, the earliest such date in league history.