Tomáš Kaplan (born 3 April 1978) is a Czech former professional footballer. He made 36 appearances in the Gambrinus liga, playing for Vysočina Jihlava and Příbram. [1]

Stadion v Jiráskově ulici is a multi-use stadium in Jihlava, Czech Republic. It is currently used mostly for football matches and is the home ground of FC Vysočina Jihlava. The stadium holds 4,082 people on an all-seater basis.

SFK Vrchovina is a Czech football club located in the town of Nové Město na Moravě in the Vysočina Region. In the 2017–18 season the club was promoted from the Czech Fourth Division and currently plays in the Moravian–Silesian Football League, which is the third tier of the Czech football system.

The 2013–14 Czech Cup was the twenty-first season of the annual football knock-out tournament of the Czech Republic. It began on 13 July 2013 with the Preliminary Round and ended with the final on 17 May 2014. The winners of the competition would have qualified for the third qualifying round of the 2014–15 UEFA Europa League, however, since both finalists qualified for Europe through their league position, the Europa League berth for the cup winners was assigned to a team in the league instead. Sparta Prague won the final 8–7 on penalties after the match finished 1–1, earning them a league-cup double. 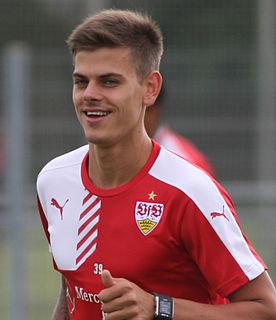 Jan Kliment is a Czech professional footballer who plays as a forward for 1. FC Slovácko.

The 2013–14 season was Dukla Prague's third consecutive season in the Czech First League.

The 2016–17 Czech First League, known as the ePojisteni.cz liga for sponsorship reasons, was the 24th season of the Czech Republic's top-tier football league. Slavia Prague won the league, while defending champions Viktoria Plzeň finished in second place. The season began on 29 July 2016 and ended on 27 May 2017.

The 2019–20 Czech National Football League was the 27th season of the Czech Republic's second tier football league. Fixtures for the season were announced on 19 June 2019. Pardubice won the competition, while relegation was confirmed for Sokolov and Vítkovice.

Jan Vojáček is a Czech retired footballer who now works as a doctor at the Institute of Functional Medicine in his home country.