Kroměříž is a Moravian town in the Zlín Region of the Czech Republic. The town's main landmark is the Baroque Archbishop's Palace, where some scenes from Amadeus and Immortal Beloved were filmed. It was declared the most beautiful historical city in the Czech Republic in 1997. The Gardens and Castle at Kroměříž were added to the list of World Heritage Sites in 1998. The city's National Museum is home to The Flaying of Marsyas, a late painting by Titian.

František is a masculine given name of Czech origin. It is a cognate of Francis, Francisco, François, and Franz. People with the name include:

Sýkora is a surname of Czech and Slovak language origin. It is related to the Polish surname Sikora. All are derived from a Slavic word for birds of the Paridae (tit) family which was used as a nickname for a small, agile person.

Radim is a Slavic origin male given name. Derived from the Slavic elements radcare, joy and mergreat, famous. The second element has also been associated with mir meaning peace or world. Nicknames are Radya, Radimek, Dima, Radek. Pronounced RAHD-yeem (shortly).

Milan Kučera is a Czechoslovak-Slovak slalom canoeist who competed at the international level from 1982 to 1993.

Ján Bátik is a Slovak slalom canoeist who has competed at the international level since 2002. He competed in the C1 event until 2005. Since 2006 he has been racing in the C2 event together with Tomáš Kučera.

Tomáš Kučera is a Slovak football player, who played in Slovakia and the Czech Republic as a goalkeeper.

Viktor Beneš is a Czechoslovak-Slovak slalom canoeist who competed at the international level from 1984 to 1993.

Slavik may refer to:

Ondřej [ˈondr̝ɛj] is a Czech given name, similar to English Andrew. 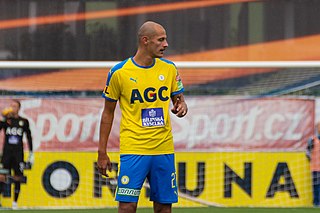 Tomáš Kučera is a Czech football midfielder. He currently plays for Teplice on loan from Viktoria Plzeň.

Pavelka is a Czech surname. Notable people include: