Karol Kučera is a retired ATP professional male tennis player from Slovakia. He achieved a career-high singles ranking of World No. 6 in September 1998, reaching the semi-finals of the Australian Open the same year.

Renzo Furlan was the defending champion, but did not participate this year.

Ján Bátik is a Slovak slalom canoeist who has competed at the international level since 2002. He competed in the C1 event until 2005. Since 2006 he has been racing in the C2 event together with Tomáš Kučera.

Louis Benedict Kucera was an American prelate of the Roman Catholic Church. He served as Bishop of Lincoln from 1930 until his death in 1957.

The 2003 Copenhagen Open was a men's tennis tournament played on indoor hard courts at the K.B. Hallen in Copenhagen in Denmark and was part of the International Series of the 2003 ATP Tour. The tournament ran from 24 February until 2 March 2003. Karol Kučera won the singles title. 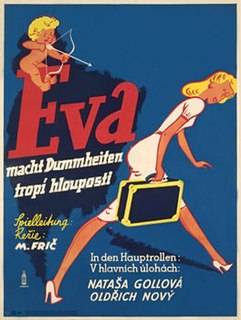 Eva Fools Around is a Czech comedy film directed by Martin Frič. It was released in 1939.

Tomáš Kučera is a Slovak football player, who played in Slovakia and the Czech Republic as a goalkeeper.

Tomáš Kučera is Czech former professional football forward. He made over 150 appearances in the Gambrinus liga. He played international football at under-21 level for Czech Republic U21 and represented his country in Football at the 2000 Summer Olympics.

This article displays the qualifying draw for men's singles at the 1994 Australian Open.

Magnus Gustafsson was the defending champion, but lost in the first round to Tomas Nydahl.