Tomáš Majtán (born 30 March 1987) is a Slovak footballer who plays as a forward for Inter Bratislava.

Majtán scored 16 goals for Inter Bratislava in the 2007–08 Second Division season and became a top goalscorer. [1] In the same season he scored 6 goals in two consecutive games. [2] On 5 February 2010, he signed a 3.5-year contract for Žilina. He scored his first goal for Žilina in his debut against Dubnica on 27 February 2010. He won the Corgoň Liga title in 2009–10, scoring 4 goals for his new club. On 8 December 2010, Majtán scored his first UEFA Champions League goal, opening the score in their 1–2 home defeat against Spartak Moscow.

Szilárd Németh is a Slovak former footballer who played as a striker.

Dušan Galis is a Slovak politician, a former Czechoslovak football player and a former manager of ŠK Slovan Bratislava. In Czechoslovak league he played 226 matches, scoring 89 goals. He was capped 8 times for Czechoslovakia, scoring 1 goal. He was a participant at the 1976 European Football Championship where he became European Champion with his national team

Filip Šebo is a Slovak former professional footballer who played as a forward. Šebo is best known for playing with Rangers.

Zdeno Štrba is a Slovak football midfielder who currently plays for TJ Slovan Skalité. He played 25 games for the Slovakia national football team.

Stanislav Šesták is a Slovak football striker who plays for FK Demjata and also is the sporting director of FK Poprad.

Marián Čišovský was a Slovak football defender, player of Czech side Viktoria Plzeň.

Tomáš Oravec is a Slovak former football forward who last played for SC Marchtrenk in the Austrian Landesliga.

Róbert Jež is a retired Slovak footballer who played as midfielder. 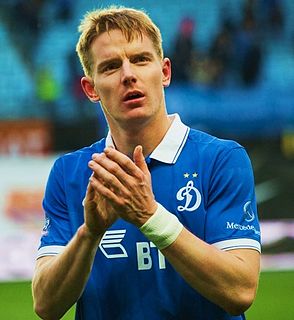 The 2009–10 season of the Slovak Superliga was the 17th season of the league since its establishment. It would begin on 10 July 2009 and end on 15 May 2010. Slovan Bratislava are the defending champions.

Babatounde Issiaka Bello is a former Beninese footballer who played as a midfielder.

Nermin Haskić is a Bosnian professional footballer who plays as a centre-forward for J2 League club Omiya Ardija.

Dávid Hancko is a Slovak professional footballer who plays for Czech First League club Sparta Prague on loan from Serie A club Fiorentina. He also plays for Slovakia as a defender.

The 2018–19 Slovak First Football League was the 26th season of first-tier football league in Slovakia since its establishment in 1993. FC Spartak Trnava were the defending champions after winning their 1st Slovak championship in the previous season.

Róbert Boženík is a Slovak professional footballer who plays as a forward for Eredivisie side Feyenoord and internationally represents Slovakia.