Paul first played for the Czech national team at the men's level at the 2015 European Curling Championships, playing second for the team skipped by David Šik. The team finished in 9th place. He played again for Šik at the 2018 European Curling Championships, this time in B Division play. They went undefeated in the round robin, but faltered in the playoffs, settling for third place in the division.

Paulová and Paul represented the Czech Republic again at the 2018 and 2019 World Mixed Doubles Curling Championships, finishing 10th in 2018 and losing in the quarterfinals in 2019. 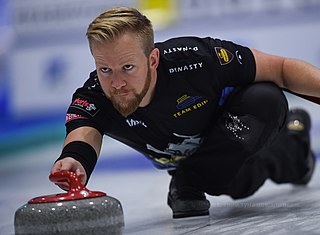 Johan Niklas Edin is a Swedish curler. He currently resides in Karlstad, which has been his curling home base since 2008. He is a four-time World champion and, thus, the only curler in history since the World Men's Curling Championship expanded to six teams in 1964 to skip his teams to four gold medals. He has also won more international medals as skip than any other skip in history. In addition to his World Championship gold medals, he has won a silver medal (2017) and two bronze medals. He is also a seven-time European Curling Champion, additionally winning two silver medals in those championships. He has won two Olympic medals, winning a silver medal at the 2018 Winter Olympics and the bronze medal the 2014 Winter Olympics. He has also made the playoffs in thirty-two Grand Slam of Curling events and skipped his team to become the first non-Canadian men's team to win any Slam, as well as the first and only men's team to win more than one Slam and the Pinty's Cup. With the same lineup in 2019, Edin and his teammates also became the first men's curling team since 2003 to win back-to-back World Curling Championships. Edin has played exclusively in the position of skip since 2007. The team bearing his name has been ranked on the World Curling Tour as high as No. 1, including for most of the 2017–18 season. Under the current World Curling Federation rankings, Team Edin is ranked among the Top 10 teams in the world.

John Shuster is an American curler from Duluth, Minnesota. He led team USA to gold at the 2018 Winter Olympics, the first American team to ever win gold in curling. He also won a bronze medal at the 2006 Winter Olympics in Turin. He has played in four straight Winter Olympics and eight World Curling Championships. 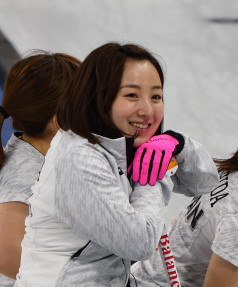 Satsuki Fujisawa is a Japanese curler from Kitami, Hokkaido. As a skip, she has won the Japanese national championship six times. Fujisawa skipped the bronze medal-winning Japanese team at the 2018 Winter Olympic Games. She is currently the skip of the Loco Solare curling team.

Cory Christensen is an American curler from Duluth, Minnesota. Christensen was one of the top junior women's curlers in the United States, playing in six national junior championships and winning four of them. She was the alternate on Nina Roth's 2018 United States Olympic team.

Tabitha S. Peterson is an American curler from Minneapolis, Minnesota. She was a bronze medalist at the 2010 World Junior Championships and is a two-time women's national champion. She currently is skip of her own team, having traded positions with Nina Roth during the 2020 off-season.

Sayaka Yoshimura is a Japanese curler from Sapporo. She is currently the skip of the Hokkaido Bank FORTIUS curling team on the World Curling Tour.

Oona Kauste is a Finnish curler from Helsinki. She is currently the skip of the Finnish National Women's team.

Amos Mosaner is an Italian curler from Cembra.

Lukáš Klíma is a Czech curler.

Mizuki Kitaguchi is a Japanese curler. She currently skips a team on the World Curling Tour.

Isabella Marianne Peggy Wranå is a Swedish curler. She is formerly the skip of the Swedish junior women's team, with whom she won a World Junior championship in 2017. In 2018, she was inducted into the Swedish Curling Hall of Fame.

Magnus Victor Nedregotten is a Norwegian curler. He currently plays second for the Steffen Walstad rink.

Kim Chang-min is a South Korean curler. Kim played skip on the South Korean men's team on home ice at the 2018 Winter Olympics.

Sara McManus is a Swedish curler from Gävle. She currently plays third on Team Anna Hasselborg. With the Hasselborg rink, she won the gold medal in women's curling at the 2018 Winter Olympics.

Steffen Walstad is a Norwegian curler from Oslo.

Bruce Mouat is a Scottish curler. He currently skips a team on the World Curling Tour. 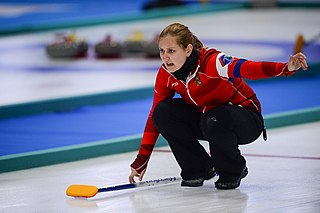 Zuzana Paulová is a Czech curler.

The 2020 Czech Mixed Doubles Curling Championship was held in Prague from February 1 to 4, 2020.

The 2019 Czech Mixed Doubles Curling Championship was held in Prague from February 1 to 3, 2019.