He played for Czechoslovakia national team (26 matches and 8 goals), and was a participant at the 1962 FIFA World Cup, where he played in the last three matches.

Pospíchal is credited with his famous saying: "Football has no logic" (Fotbal nemá logiku).

Jiří Pešek was a Czech football player and professional coach. 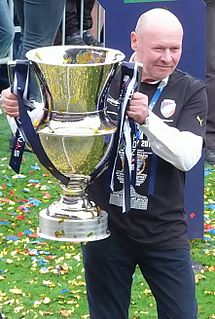 Miroslav Koubek is a Czech former goalkeeper and manager. 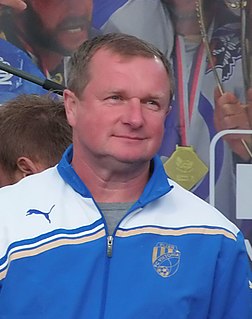 František Ipser was a Czech football manager and former player.

Jiří Rubáš was a Czech football manager and former player. 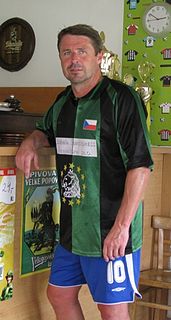 The 2018–19 Czech Cup, known as the MOL Cup for sponsorship reasons, was the 26th season of the annual knockout football tournament of the Czech Republic. It began with the preliminary round in July 2018 and ended with the final in May 2019. The winner of the cup will gain the right to play in the third qualifying round of the 2019–20 UEFA Europa League.

The 2019–20 season was SK Slavia Prague's 27th season in the Czech First League. Slavia successfully defended their domestic title, winning the Czech First League for the sixth time, whilst in the Czech Cup they were knocked out in the Fourth Round by Baník Ostrava. In the UEFA Champions League, Slavia finished bottom of their group, which included Internazionale, Borussia Dortmund and Barcelona, with 2 points.

The 2019–20 Czech First League, known as the Fortuna liga for sponsorship reasons, is the 27th season of the Czech Republic's top-tier football league. The defending champions are Slavia Prague, who won their fifth Czech title in previous season. This season is the second one with a new league structure in which 16 clubs play each other home and away, until the league is split up in championship, Europa League and relegation groups.

Petr Ardeleánu is a Czech football referee who officiates in the Czech First League. He has been a FIFA referee since 2013, and is ranked as a UEFA first category referee.

The 2019–20 AC Sparta Prague season was the club's 125th season in existence and the fifth consecutive season in the top flight of Czech football. In addition to the domestic league, AC Sparta Prague participated in this season's editions of the Czech Cup and the UEFA Europa League. The season covered the period from 1 July 2019 to 8 July 2020.