Tomáš Stúpala (born 5 May 1966 in Bratislava) is a former Slovak football player.

He played club football for ŠK Slovan Bratislava. He earned 14 caps for the Slovak national football team from 1994 to 1995. [1]

After he retired from playing, became a football coach. He was appointed assistant manager of ŠK Slovan's B side in 2008. [2]

Ján Kozák is a Slovak football coach and former player.

Dušan Galis is a Slovak politician, a former Czechoslovak football player and a former manager of ŠK Slovan Bratislava. In Czechoslovak league he played 226 matches, scoring 89 goals. He was capped 8 times for Czechoslovakia, scoring 1 goal. He was a participant at the 1976 European Football Championship where he became European Champion with his national team 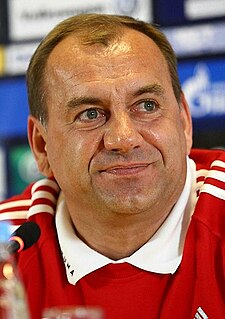 Vladimír Weiss is a Slovak football coach and former player. He was the coach of the Georgian national team from 2016 to 2020.

Karol Jokl was a Slovak football player and manager. He played for ŠK Slovan Bratislava and Czechoslovakia.

Ján Švehlík is a former Slovak football player and later a football manager. He played for Czechoslovakia, for which he played 17 matches and scored 4 goals.

Samuel Slovák is a Slovak former footballer who played as an attacking midfielder and currently serves as an assistant coach of Slovakia.

Pavol Sedlák is a Slovak footballer, who currently plays for SK Schwadorf and also assistant manager in the Slovak giant ŠK Slovan Bratislava. His former clubs were MŠK Rimavská Sobota and ŠK Slovan Bratislava. He previously played for FK DAC 1904 Dunajská Streda. He is a midfielder with a lot of international experience. He is well known for his dribbling ability and super strong shots from medium distances. Together with Samuel Slovák, he is one of the leaders inside the squad of the club.

Michal Vičan is a former Slovak association football player and manager who led ŠK Slovan Bratislava to victory in the UEFA Cup Winners' Cup in the 1969 final against FC Barcelona.

Bozhin Georgiev Laskov (Bulgarian: Божин Георгиев Ласков; was a Bulgarian association football player who played as a striker, noted for his tall stature, impressive physique and great heading. In addition, Laskov was a professional doctor and a trained Bulgarian Orthodox priest. After 1946, he lived and worked in Czechoslovakia and is counted among Bulgaria and Slovakia's best footballers of the era.

Norbert Hrnčár is a former Slovak football player and manager.

Dominik Greif is a Slovak footballer who plays for Slovan Bratislava and Slovakia as a goalkeeper.