He held a synod at Galway in 1523, attended by bishops of Kilmacduagh, Achonry Clonmacnoise, Kilfenora, Ross, in addition to representatives of the dioceses of Elphin, Killala and Armagh. Died 28 April 1536 and buried in the Franciscan church of Galway under the same monument with his predecessor, Muiris Ó Fithcheallaigh. Succeeded by Christopher Bodkin, who was in turn succeeded by Dr William Ó Mullally, Protestant Archbishop of Tuam, son of Tomás.

His son, William Ó Mullaly was formerly Dean of Tuam, and was nominated as Archbishop on 11 Nov 1572, and appointed by Queen Elizabeth I as Archbishop of Tuam. He was consecrated on 14 April 1573.

Other members of his immediate family included: 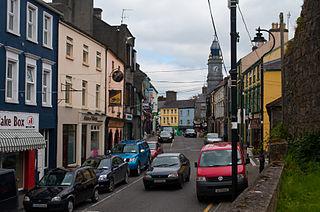 Tuam is a town in Ireland and the second-largest settlement in County Galway. It is west of the midlands of Ireland, about 35 km (22 mi) north of Galway city. Humans have lived in the area since the Bronze Age while the historic period dates from the 6th century. The town became increasingly important in the 11th and 12th centuries in political and religious aspects of Ireland. The market-based layout of the town and square indicates the importance of commerce.

Sir Gerald or Gerard Lally or O'Mullally was an Irish Jacobite and French military officer.

The Claregalway Friary is a medieval Franciscan abbey located in the town of Claregalway, County Galway, Ireland.

Mullally or Mulally or Mullaly or Mulaly is a surname of Irish origin. Notable people with the surname include:

John de Burgh, or de Burgo, or Burke was an Irish Roman Catholic clergyman who served as Vicar Apostolic and Bishop of Clonfert from 1629 to 1647 and Archbishop of Tuam from 1647 to 1667.

Seán Ó Maolalaidh was Chief of the Name.

Nehemiah Donnellan was Archbishop of Tuam.

Muireadhach Ua Dubhthaigh was an Archbishop of Connacht, in Ireland.

William Mullally, whose family name also appears as Ó Mullally, O'Mullally, Lally, Laly or Lawly, was Archbishop of Tuam in the Church of Ireland from 1573 to his death in 1595.

George Joseph Plunket Browne (1795–1858) was an Irish Roman Catholic clergyman. Born to a "well-known Roscommon family", he served as Bishop of Galway from 1831 until 1844, and afterward as Bishop of Elphin, until his death on 1 December 1858. He was charged with being a "Cullenite" in 1855, that is, a follower of ultamontane Paul Cardinal Cullen.