A scribe is a person who serves as a professional copyist, especially one who made copies of manuscripts before the invention of automatic printing.

Ó hÍcí was born inBaile an Ghraeigh, Killenaule (Cill Náile), in County Tipperary, the oldest child of Seán Ó hIcí and Máire Ní Bhraonáin. According to his own account "I led the life of a country peasant until I was forty two years of age, labouring hard at learning to read and write the language of my forefathers. I at last became so fond of it that I determined not to read anything but Irish, even at Mass; for I thought I could not pray fervently in English ..." 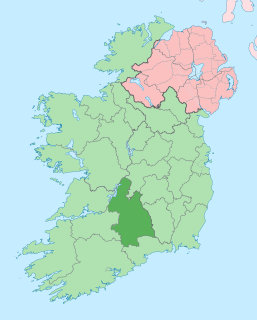 He moved to Waterford, where he was active in teaching and scribal work till his death. Some of his manuscripts are held at Mount Melleray. 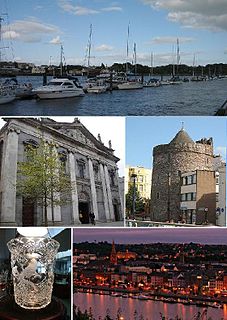 Waterford is a city in Ireland. It is in County Waterford in the south east of Ireland and is part of the province of Munster. The city is situated at the head of Waterford Harbour. It is the oldest and the fifth most populous city in the Republic of Ireland. It is the eighth most populous city on the island of Ireland. Waterford City and County Council is the local government authority for the city. According to the 2016 Census, 53,504 people live in the city, with a wider metropolitan population of 82,963.

Mount Melleray is a townland situated in the Knockmealdown Mountains near Cappoquin, Co. Waterford, Ireland.

"If you should want another to help write out the Irish Minstrelsy, I don’t know any man more capable of succeeding James Scurry (Séamus Ó Scoraidhe) than Thomas Hickey whose name you heard me mention so often and whose name poor Scurry mentioned in his essay. He is by far the best Irish scholar I ever met, except poor Scurry — he read and wrote more Irish than Scurry, though Scurry knew the language radically and grammatically better ... N.B. Thomas Hickey was the collector and writer of the Leabhar Dubh."

"Mr Hickey was Professor of Irish for upwards of twenty years in St John’s College, Waterford, during which time he was respected and esteemed by the professors and students of that college. Very many priests of the diocese of Waterford and Lismore studied the Irish language under his direction. Among the books he translated are the Roman Missal, the Glories of Mary and the greater portion of the Bible."

"He is one of the last of the great Irish scholars of whom the editor of Donleavy’s catechism [an tAthair John McEncroe in 1822 agus 1848] remarks that they were able by “stratagem” to keep themselves in existence. This is literally true of him for he is buried alive in a stable loft where he can say with holy Job 'soror mea vermibus'."

Ó hIcí was quoted on his situation

"Now, Sir, as to my present condition, it is my own choice . . .. Nor would I change my condition for a situation in the best university in England or anywhere else without the permission and approbation of Dr. O’Brien, from whom I never wish to be separated as long as he is pleased to keep me."

Although Irish has been used as a literary language for more than 1,500 years, and in a form intelligible to contemporary speakers since at least the sixteenth century, modern literature in Irish owes much to the Gaelic Revival, a cultural movement which began in the late nineteenth century. Writers in Irish have since produced some of the most interesting literature to come out of Ireland, supplemented by work produced in the language abroad.

The Synod of Ráth Breasail was an Irish national church council which took place in Ireland in 1111. It marked the transition of the Irish church from a monastic to a diocesan and parish-based church. Many Irish present day dioceses trace their boundaries to decisions made at the synod. 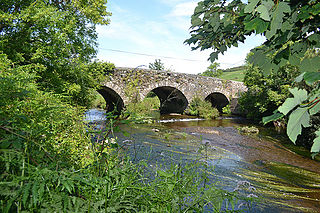 Ballylaneen is a small village in County Waterford, Ireland, approximately halfway between the villages of Kilmacthomas and Bunmahon on a hill by the River Mahon.

The Book of Lismore is a Medieval Irish manuscript. It was so named by Dennis O'Flynn, a historian in Cork, to whom it had been given in 1815. Eugene O'Curry blamed O'Flynn, in 1855, for splitting the book into parts and selling them off separately to collectors.

Séamus Hickey is an Irish sportsperson. He plays hurling with his local club Murroe-Boher and was a member of the Limerick senior inter-county team from 2006 until 2018.

Michael Patrick O'Hickey was an Irish Catholic priest and professor of Irish at Maynooth College and an Irish language campaigner.

Séamus Ó Duilearga was an Irish folklorist, professor of folklore at University College Dublin and Director of the Irish Folklore Commission.

Coiscéim is a prolific Dublin-based Irish-language publisher founded by writer, historian and language activist Pádraig Ó Snodaigh in 1980. With over 1,500 titles Coiscéim have published the largest number of titles amongst the 26 other Irish language publishers.

Tomás Ó Con Cheanainn was an Irish scholar and historian.

Risteard Ó Foghludha was an Irish-language teacher, journalist and editor from near Youghal, County Cork.

Meidhbhín Ní Úrdail is an Irish academic. She is Associate Professor of Modern Irish at University College Dublin. Ní Úrdail's areas of research include the Irish manuscript tradition; Ireland's vernacular written tradition from medieval times to the nineteenth century; narrative discourse and historical representation; the complementary relationship between script and print in eighteenth- and nineteenth-century Ireland; and contemporary Irish writing and its heritage.