Tomás Alberto González Vera (born 21 December 1977, in Asuncion, Paraguay), is a Paraguayan footballer. He played twice in Chile: once for Rangers in 1999, and the other for Cobreloa, ten years later.

González has eight matches of the eleven matches than the team has played in total and in the Copa Chile. González also has played one and the only match for the copa chile against Deportes Antofagasta they lost 2–1 on that occasion that meant that despite it lost a classic also was eliminated of the cup.

The CONMEBOL Libertadores, also known as the Copa Libertadores de América, is an annual international club football competition organized by CONMEBOL since 1960. It is the highest level of competition in American club football. The tournament is named after the Libertadores, the leaders of the South American wars of independence, so a literal translation of its former name into English would be "Liberators of America Cup".

Once Caldas S.A., simply known as Once Caldas, is a professional Colombian football team based in Manizales, that currently plays in the Categoría Primera A. They play their home games at the Palogrande stadium.

Club de Deportes Cobreloa S.A.D.P., commonly referred to as Cobreloa, is a Chilean football professional club based in Calama, Región de Antofagasta, Chile. That competes in the Primera División. The club's home ground is the Estadio Zorros del Desierto.

The 1960 Copa de Campeones de América was the first season of the Copa CONMEBOL Libertadores, CONMEBOL's premier club tournament. Seven association's clubs entered the first competition, with three not sending a representative. The first match of the tournament was played between Uruguayan side Peñarol and Bolivian side Jorge Wilstermann on April 19 in Montevideo, Uruguay.

Deportes Antofagasta is a Chilean football club based in the city of Antofagasta, that is a current member of the top tier Campeonato Nacional. The club's home stadium is the Estadio Bicentenario Calvo y Bascuñán, with a capacity for 21,178 spectators. 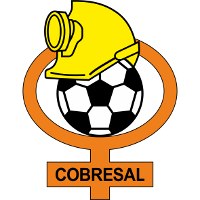 Club de Deportes Cobresal or simply Cobresal, is a Chilean football club based in El Salvador, Atacama, a Chilean mining camp, and participates in Campeonato Nacional. The team was founded on 5 May 1979, and the name of the club comes from the local copper mine establishment. Since its inception, the club has played its home games at the El Cobre Stadium, which has a capacity of approximately 12,000, which is more than the entire population of the village (7,000). 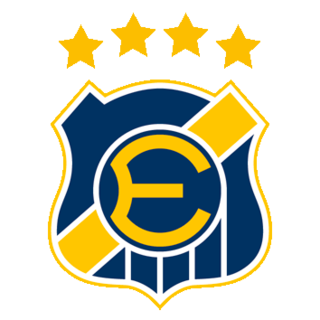 Mauricio Fernando Aros Bahamonde is a former Chilean footballer who played as a left-back.

Darío Anastacio Verón Maldonado is a former Paraguayan professional footballer that last played as a defender for Club Olimpia in the Paraguyan First Division. He also holds Mexican citizenship. 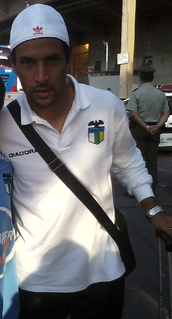 Luis Pedro Figueroa Sepúlveda(born May 14, 1983) is a Chilean footballer currently playing for Coquimbo Unido in the Chilean Primera División as midfielder.

Daniel Felipe González Calvo, commonly known as Chucky González, is a footballer who plays as an attacking midfielder and plays internationally with the Chile national football team. He is known in Chile for being a free-kick specialist.

Sebastián Alejandro Roco Melgarejo was a Chilean footballer who played as centre back.

Eduardo Jesús Vargas Rojas is a Chilean professional footballer who plays as a forward for Brazilian club Atlético Mineiro and the Chile national team.

Nicolás Alexander Maturana Caneo is a Chilean professional footballer who plays for Chilean club Cobreloa as a forward.

Carlos Gabriel González Espínola is a Paraguayan professional footballer who plays as a striker for Liga MX club Tigres UANL.

The involvement of Clube Atlético Mineiro in international club football began in 1972, the year of its first appearance in an official competition at that level. Since then, the Brazilian club, based in Belo Horizonte, Minas Gerais, has participated in 23 continental and one intercontinental tournament. Atlético Mineiro has won four official titles at the international level: the Copa Libertadores in 2013; the inaugural edition of the Copa CONMEBOL in 1992, and again in 1997; and the Recopa Sudamericana in 2014. In addition, the club finished as runner-up of the Copa CONMEBOL in 1995, the Copa de Oro in 1993, and the Copa Master de CONMEBOL in 1996.