Born in Temperley, Buenos Aires, Andrade started playing at age six for Club Parque. In 2004, he joined the youth ranks of Lanús. In 2007, he traveled to Spain and had trials at Atlético Madrid and FC Barcelona, but ultimately decided to return to Lanús where he signed his first contract. After leaving Lanús in late 2011, Andrade joined River Plate in 2012 and signed a contract with them in December of that year. In 2013, he was elected the best player of the La Comunidad de Madrid under-17 tournament won by River. Also in 2013, he received call-ups for the Argentina under-17 national team. [1]

Andrade returned to River Plate in early 2016 and made his professional debut in 30 April of that year against Vélez Sarsfield in the Primera División. [3] He appeared in both legs of the 2016 Recopa Sudamericana and was part of the winning campaigns of the 2015–16 and 2016–17 Copa Argentina.

On 24 January 2018, Andrade joined Brazilian club Atlético Mineiro on a year-long loan deal which included an optional buyout clause. [4] He scored his first professional goal on 7 June 2018, in a 3–1 derby win over América. [5]

After his time with Atlético Mineiro, Andrade joined Athletico Paranaense on 25 January 2019 on a one-year loan from River Plate. [6]

Club Athletico Paranaense is a Brazilian football team from Curitiba in Paraná, founded on March 26, 1924. The team won the Campeonato Brasileiro Série A, Brazil's top football division, in 2001, the Copa Sudamericana in 2018 and the Copa do Brasil in 2019.

The Supercopa Libertadores, also known as the Supercopa Libertadores João Havelange, Supercopa João Havelange or simply Supercopa, was a football club competition contested annually between 1988 and 1997 by the past winners of the Copa Libertadores. The tournament is one of the many South American club competitions that have been organised by CONMEBOL. As through the successive editions of this cup were added new champions from the Copa Libertadores, in 1997 the Conmebol decided that the last teams of each group would descend to reduce the number of teams to disputed it. That year descended Velez Sarsfield, Racing Club and Boca Juniors and Gremio (Brazil). The competition was discontinued to make way for the Copa Mercosur and Copa Merconorte in 1998, which also grew in importance after the final season of the Copa CONMEBOL in 1999. These tournaments were also discontinued in favor of the Copa Sudamericana which allowed the revival of the Recopa Sudamericana.

Marcelo Alberto Barovero is an Argentine professional footballer who plays as a goalkeeper for Spanish club Burgos. He often goes by the nickname of "Trapito".

2008–09 season of Argentine football was the 118th season of competitive football in Argentina. 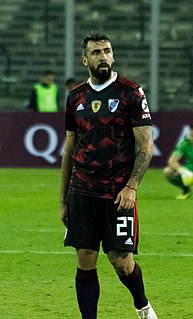 Lucas David Pratto is an Argentine professional footballer who plays as a striker for Feyenoord, on loan from River Plate.

Maycon Vinicius Ferreira da Cruz, commonly known as Nikão, is a Brazilian footballer who plays for Athletico Paranaense as an attacking midfielder.

The 2013–14 Primera División season was the 123rd season of top-flight professional football in Argentina. It started on August 2, 2013 and ended on May 24, 2014. Twenty teams competed in the league, seventeen returning from the 2012–13 season and three promoted from the Primera B Nacional Championship. For first time Independiente did not compete in the Primera División championship.

Leonardo "Léo" Pereira is a Brazilian footballer who plays as a central defender for Flamengo.

The 2015 season Independiente Participate in the Argentine Primera División, Copa Argentina and the Copa Sudamericana.

Lucas Adrián Hoyos is an Argentine professional footballer who plays as a goalkeeper for Vélez Sarsfield.

The 2016–17 Copa Argentina was the eighth edition of the Copa Argentina, and the sixth since the relaunch of the tournament in 2011. The competition began on February 2 and ended on December 9, 2017.

Braian Ezequiel Romero is an Argentine professional footballer who plays as a centre-forward for Defensa y Justicia, on loan from Independiente.