Last updated February 21, 2021
Mexican footballer
In this Spanish name, the first or paternal surname is Camposand the second or maternal family name is Alejandre.

He was part of the Cruz Azul side that became the first Mexican team to reach the final of the Copa Libertadores. [1]

A left-sided wingback or midfielder, Campos earned seven caps for Mexico in 2001 and 2002, scoring one goal. He was a part of the first selection called up by Javier Aguirre upon Aguirre's first appointment as Mexican head coach in June 2001. [2]

Campos was appointed the coach of the newly formed Tercera División affiliate team of FC Juárez for the 2017-18 season. [3] Campos maintained an undefeated streak of 21 matches. On 19 March 2018, the board of FC Juárez announced that Campos would be the interim manager for the rest of the first team's Clausura 2018 season, after sacking Miguel Fuentes. [4]

Dorados de Sinaloa, or Dorados, is a Mexican professional football club based in Culiacán, Sinaloa. The club plays its home games in Culiacán, Mexico.

Club León, also known as León, is a Mexican professional football club based in León, Guanajuato, that competes in the Liga MX, the top flight of Mexican football.

Ricardo Ferretti de Oliveira is a Brazilian-born Mexican former professional footballer and current manager of Liga MX club Tigres UANL. He is commonly referred to by his nickname Tuca. 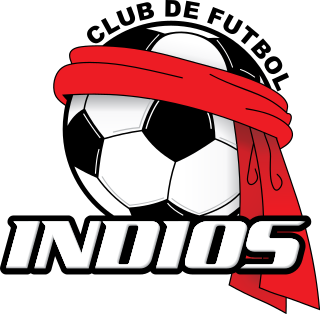 Club de Fútbol Indios de Ciudad Juárez, commonly referred as Indios de Ciudad Juárez or simply Indios, was a Mexican football club. Founded in 2005 when CF Pachuca moved its Pachuca Juniors to Ciudad Juárez, it was promoted to the Primera División de México after the 2007–2008 season, with Pachuca divesting its shares upon promotion. However, the team was relegated back to the Liga de Ascenso following the 2010 Clausura and folded in 2015.

Róbert Dante Siboldi Badiola is an Uruguayan former professional footballer and former manager of Liga MX club Cruz Azul. During his playing career, he played as a goalkeeper and was nicknamed "Flaco."

Sindey Balderas Melgar is a former Mexican footballer, who last played as a defender for C.F. Ciudad Juárez in Liga MX. His start with Tigres in 1999, put him under the direction of coach Ricardo Ferretti and he would represent the club in the Invierno 2001 final. He also played for Veracruz in 2007 and 2008.

Club de Fútbol Lobos de la Benemérita Universidad Autónoma de Puebla is a Mexican football club based in Puebla, Mexico. The club represented the Benemérita Universidad Autónoma de Puebla. The club's history goes back to the early 1930s when the club was known as Preparatoria, formed exclusively by players that attended the university. The club has played on and off since then. It was not until the 1990s when the club made a serious comeback. It has been playing in the lower level Mexican football divisions. In 2003 the club was awarded a spot in the Primera A, a league where the club played until earning promotion in 2017 to the Liga MX Primera División. The club marked its home in the Estadio Universitario BUAP.

José Alberto Hernández Rojas is a Mexican footballer. He plays as a midfielder for Cruz Azul Hidalgo.

Luis Arturo Montes Jiménez is a Mexican professional footballer who captains and plays as a midfielder for Liga MX club León. He is popularly known by his nickname "Chapito".

Venados Fútbol Club is a Mexican football club based in Mérida, Yucatán. The team are currently playing in the Liga de Ascenso, the second tier of the Mexican football league system. For the Clausura 2011 season they became the filial team of Atlante, whilst until that point they had been the subsidiary team of Monarcas Morelia.

Jorge Francisco Almirón Quintana, commonly known as Jorge Almirón, is an Argentine football manager and former player who played as a defensive midfielder.

The 2011–12 Liga de Ascenso season is the second-level football league of Mexico. 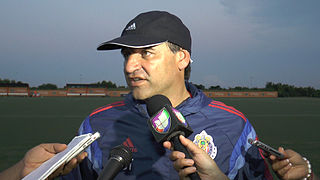 Carlos Julio Bustos is an Argentinian professional footballer and is the Head Coach of Club Alianza Lima.

Fútbol Club Juárez, commonly referred to as Bravos de Juárez, or simply as Juárez, is a Mexican football club based in the city of Ciudad Juárez, Chihuahua that currently competes in Liga MX.