Tomás Onésimo Canavery (1839–1913) was an Argentine Catholic priest and military chaplain, [1] who served under the command of Bartolomé Mitre during the War of the Triple Alliance. [2] He participated in most of the military actions against the Paraguayan forces, being promoted to lieutenant colonel in the same battlefield by order of General Juan Andrés Gelly y Obes. [3]

He had a long career as a parish priest of the Province of Buenos Aires, serving in the curacy of Almirante Brown, Arrecifes, Benito Juárez, Moreno, Ramallo and others.

He started his military career being almost a child. At the age of 13 years, he participated in the Battle of Caseros, as sub-lieutenant, [4] and was among the defenders of the city, during the conflict of September 11, 1852, between Buenos Aires Province and the Argentine Confederation. [5]

He left the habits for a brief period and entered the Conciliar Seminary of Buenos Aires in 1860. [6] He served as a military chaplain during the Paraguayan War, and for his heroic behavior was promoted to Lieutenant colonel. [7] Canavery was present at the battles of Yatay, Battle of Tuyutí, Battle of Curupayty and Battle of Lomas Valentinas, occurred on December 27, 1868. [8] Finished the war he was added to troops who occupied the city of Asunción. [9] He was the first Chaplain who served in Villa Occidental, being replaced in the position by José Pablo Lynch y Cabrera. [10]

He was the most prominent member of the Canaverys family in the Río de la Plata. He was awarded the following medals: commemorative for the taking of Uruguaiana; cordon of Tuyutí; shield of Curupayty; star of Guardia Nacional of Buenos Aires Province. And the crosses granted by the Brazilian and Uruguayan government. [11]

He served as the Governor's Chaplain in the Gran Chaco, which also included territories of Formosa and Paraguay. [12] In 1897 he obtained his retirement from the Argentine army by decree of the then President José Evaristo Uriburu. [13]

He was also dedicated to teaching, he served as preceptor of elementary school in the towns of Ramallo [17] and Ministro Rivadavia (Greater Buenos Aires), being also the priest of the Parish Nuestra Señora del Tránsito of that locality in 1877. [18]

Tomás Canavery took part in several national events, such as the installation of the Railways in 1857. He also attended the inauguration of the Ramallo Railway Station of the Central Argentine Railway in 1886, and supported the privatization of the railways in 1890. [19] His last public appearances was in 1908 when he attended the senses tributes celebrated to the Warriors of Paraguay in the Recoleta Cemetery, [20] and during the Centenary of the May Revolution in 1910. [21]

At the moment a street of the district of Nuñez, Autonomous City of Buenos Aires takes its name in its honor. [22] In the city of Ramallo is located the primary education establishment known as Escuela Nº5 Capellan Cnel. Tomás O. Canavery. [23]

Tomás Onésimo Canavery was baptized on September 2, 1839, in the parish of San Miguel Arcángel, son of Tomás José Canaverys and Macedonia Castillo, a Creole woman related to Juan Bautista Rondeau. His father Tomás, was baptized with that name for being born on December 29 (St Thomas's Day). [24]

He had several brothers, including Ángel Canavery (1850-1916), a military man who participated in the Conquest of the Desert. His sister María Juana Canavery, was married to Enrico Mosconi, an engineer born in Milán, who had been hired by the government for the construction of Central Argentine Railway. Enrico and María Juana were the parents of Enrique Mosconi, a prestigious military and engineer, first President of the Yacimientos Petrolíferos Fiscales , the main oil company of Argentina. [25]

He also was brother of Justino Canavery, which is registered in the census of 1855 along with several members of the Rondeau family. [26]

His grandparents were Mariano Canaverys and Tiburcia Sosa Ravelo, belonging to a Creole family of Buenos Aires, Caparica and San Juan Province. [27] His grandfather was tutor in Escuela de la Piedad, a primary school located in the neighborhood of San Nicolás. He and his wife also had opened a private school for boys and girls in the towns of Olivos. Like all schoolmasters of the time, Mariano was instructed by James Diego Thompson, who had arrived in Buenos Aires to apply modern techniques of education created by Joseph Lancaster. [28]

Tomás Canavery was linked to the family of Rafael Macedo Ferreyra, a politician who was murdered by the Mazorca in 1842. [29] He attended as a sponsor at the wedding of his parents, and at the baptism of his uncle Rafael Canavery. [30]

Among his cousins were prominent jurists, military men and also musicians like Carlos Canaveris, a pianist and guitarist, [31] who had participated in musical ensembles with Ernesto Ponzio, [32] and Isabel Cecilia Canavery (1881-1945), the author of the poem El cardo azul, recorded by Carlos Gardel and José Razzano for the label Odeon Records. [33]

Although his paternal surname is not of Irish origin, it is possible that some of his paternal ancestors were of French-Irish roots. [34] Tomás Canavery was the priest who conducted the wedding of Juan Emiliano O'Leary (father of Juan O'Leary) and Dolores Urdapilleta, event celebrated on February 3, 1870 in Villa Hayes. [35] He also served as parish priest for the Irish community established in Ramallo. [36]

He was personal friend and comrade of Bartolomé Mitre, President of Argentina from 1862 to 1868, [37] and Ricardo Gutiérrez, distinguished medical doctor. [38] He also maintained friendship with Cornelio Casablanca, a relative in law, who served as Manager of the Spanish Bank of the Rio de la Plata.

Tomás Canavery died on September 13, 1913 and his remains were deposited in the pantheon of the warriors of Paraguay in the Cementerio de la Recoleta. He was a direct descendant of Juan Canaverys (1748-1822), employed in the Court of Auditors of Buenos Aires during the Viceroyalty of the Río de la Plata, and one of the neighbors that attended the Cabildo abierto of 22 of May 1810. [39]

Angel Mateo Canavery was an Argentine military man, who participated in the Argentine Civil War and Conquest of the Desert. He took part against the Montoneras of Ricardo López Jordán, and against Civic Union troops during the Revolution of the Park.

Juan de Canaveris (1748–1822) was an Italian lawyer and politician, who served during the viceroyalty of Río de la Plata as accounting officer in the Tribunal de Cuentas de Buenos Aires. He had achieved a high social status in the Viceroyalty of the Río de la Plata, where he supported the revolutionary movements of May, being the only neighbor of Italian origin who attended in the Open Cabildo, of May 22, 1810.

Manuel Canaveris (1787–1830) was an Argentine army officer, who took part in the defense and reconquest of Buenos Aires during the English Invasions. He served under Colonel Ignacio Álvarez Thomas in the 4th Regiment of Buenos Aires, participating in the Campaigns to the Interior of the Provinces of 1810.

Enrico Mosconi (1843-1910) was an Italian engineer and the father of the General Enrique Mosconi. He actively participated in the construction of the railways in the Argentine Republic.

Joaquín Canaveris was an Argentine attorney, merchant, politician and military man, who served as consignee in The Consulate of Buenos Aires. He had an active participation in the defense of Buenos Aires during the English invasions, serving as an Assistant in the battalion of Tercio de Vizcaínos. 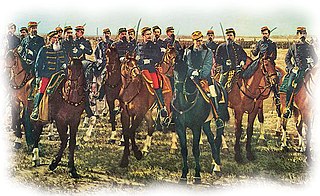 Saturnino Canaveri (1855–1939) was an Argentine military man and politician, who served as officer of the 2nd Cavalry Regiment. He took part in the Battle of Aluminé, against the Chilean Army, and also in the defense of the National Government during the Revolution of '90.

Feliciano Canaveris (1813–1843) was an Argentine military officer, who participated in the civil wars in Argentina between the unitarios and the federales. He was discharged from the Federal army in 1835, being murdered years later in the Banda Oriental by order of Manuel Oribe.

Ramón de Amaya was an Argentine-Uruguayan military man and politician, who fought against the English during the British invasions of the River Plate, and who participated in the Uruguayan Civil War.

Héctor Canavery was an Argentine politician and military man, who took part in the military campaigns in the territory of Patagonia. He also dabbled in politics, serving as a legislator for the National Autonomist Party.

Alonso Muñoz de Gadea (1630s-1708) was a Spanish politician, accountant and military officer who served in Buenos Aires during the Viceroyalty of Peru as Alcalde, Procurador and Mayordomo of the Cathedral Mayor of the city.

Baldomero Lamela (1838-1901) was an Argentine army officer, who served under the command of the General Julio Argentino Roca, during the expeditions in southern Argentina. He also participates in the War of the Triple Alliance.

Mariano Olier (1752-1816) was an Argentine Catholic priest, who had an outstanding performance in the fight against the smallpox epidemic, that hit the city of Buenos Aires towards the end of the 18th century.

Miguel Antonio Cuyar (c.1780-1840s) was an Asturian merchant and politician. He served in the militia of Buenos Aires, during the English Invasions, being assigned as Captain in the 7th Company of Asturians. 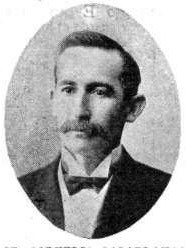 Cornelio Casablanca (1861–1945) was an Argentine financier and politician. He worked as a manager in the branches of the Banco Español del Río de la Plata and Banco de la Nación Argentina.

Francisco Álvarez Campana (1707–1773) was a Spanish merchant and politician, who served during the Viceroyalty of Peru as Regidor and Attorney General of Buenos Aires. In 1755 he founded the Colegio de Huérfanas of the city.

Bernardino Verdún de Villayzán (1677-?) was a Spanish Catholic priest. He was Provisor and Vicar General of the bishopric of Buenos Aires, during the Viceroyalty of Peru.

José Antonio Acosta was a Spanish Roman Catholic priest who served the holy charity of Buenos Aires. He also served as Rector of the Real Colegio de San Carlos between 1786 and 1792.

Saint Francis Xavier Church of Ramallo is an Argentine Catholic church located in the town of Ramallo, province of Buenos Aires. 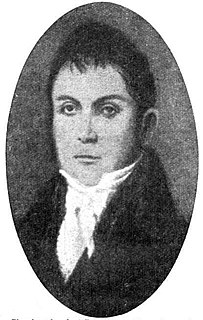 José Francisco Ugarteche (1768-1834) was a Paraguayan jurist and politician, who had outstanding performance during the colonial and post colonial period of Argentina.