Tomás González (born Medellin, 1950) is a Colombian writer. He studied philosophy at the Universidad Nacional de Colombia. He is best known for his debut novel In the Beginning Was the Sea (1983) which was translated into English by Pushkin Press. González lived in the United States for twenty years before returning to his native Colombia in 2002. [1]

He is the nephew of the writer Fernando Gonzalez. 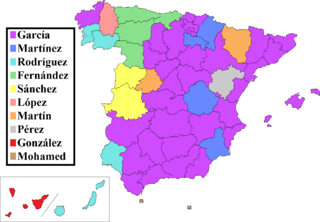 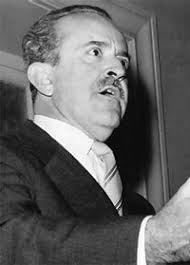 Guillermo León Valencia Muñoz is a Colombian politician, lawyer and diplomat who served the 21st President of Colombia from 1962 to 1966.

Víctor Manuel Gaviria González is a film director, writer, and poet. His three feature length films are highly acclaimed and have won many international awards. He is the first Colombian filmmaker to be featured at the Cannes Film Festival in France. He is often recognized as the most influential and well-known filmmaker to come out of Colombia, often being considered an exception to Colombian Cinema.

Tomás Carrasquilla Naranjo (1858 – 1940) was a Colombian writer who lived in the Antioquia region. He dedicated himself to very simple jobs: tailor, secretary of a judge, storekeeper in a mine, and worker of the Ministry of Public Works. He was an avid reader, and one of the most original Colombian literary writers, greatly influencing the younger generation of his time and later generations. Carrasquilla was little known in his time, according to Federico de Onís, a scholar of Carrasquilla's works. It was only after 1936, when he was already 68 years old, when he was awarded with the National Prize of Literature, that Carrasquilla got a national recognition. Tomás Carrasquilla Library Park is named in his honor. 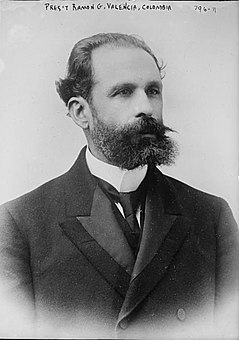 Ramón González Valencia was a Colombian conservative, military officer and statesman. He participated in the civil wars of 1876, Colombian Civil War of 1895, and the Thousand Days War.

Jersson Amur González Díaz is a retired Colombian football defender and defensive midfielder. He was notable for possessing great ball control and an experienced free-kick taker. 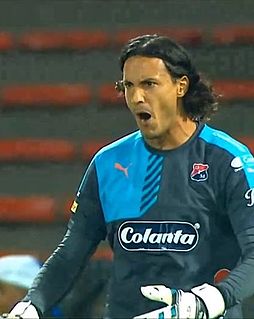 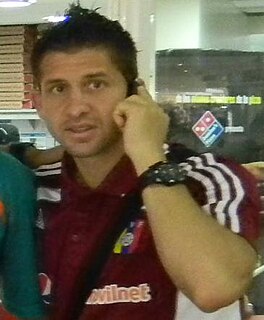 Carlos Eugenio Restrepo Restrepo was a Colombian lawyer, writer, and statesman, who was elected President of Colombia in 1910. During his administration he worked towards making political reconciliation among the Conservative and Liberals. He appointed members of the Liberal Party to his Cabinet, and to the dismay of some of his own party, adopted a neutral stand on all issues. He later served as Minister of Government and Ambassador to the Vatican City State. 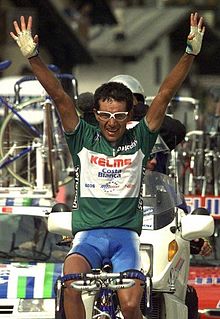 José Jaime González Pico, also known as Chepe González, is a Colombian former road bicycle racer. He won stages in Tour de France and Giro d'Italia. He also won the Vuelta a Colombia in 1994 and 1995.

Fernando González Ochoa, was a Colombian writer and existentialist philosopher known as "el filósofo de Otraparte". He wrote about sociology, history, art, morality, economics, epistemology and theology in a magisterial and creative way, using different genres of literature. González is considered one of the most original writers of Colombia during the 20th century. His ideas were controversial and had a great influence in the Colombian society at his time and today. The González work was the inspiration of Nadaism, a literary movement founded by one of his disciples, Gonzalo Arango. The Otraparte Villa, his house in Envigado, is today a museum and the headquarters of the cultural foundation to preserve and promote his legacy. The place was declared a National Patrimony of Colombia in 2006.

Freddy Excelino González Martínez, also known as Fredy González, is a Colombian road racing cyclist. He is a two-time winner of the Mountains classification in the Giro d'Italia. His victories came in the 2001 and 2003 races. He also came close to winning in 2000, when he finished second to Francesco Casagrande. González has a total of 34 career victories.

Alejandro González is a Colombian professional tennis player. He has a career-high singles ranking of World No. 70 achieved on the 9 June 2014.

Soledad Acosta Kemble was a Colombian writer and journalist. A sophisticated, well-travelled, and social woman, she received a much higher and better rounded education than most women of her time and country, and enjoyed a high standing in society, not only for her family background, but for her own literary endeavours. She collaborated in various newspapers including El Comercio, El Deber, and Revista Americana, among other periodicals. Using her writings, she was a feminist well ahead of her time, she lobbied for equal education for women, and wrote on various topics pertaining to female participation in society and family, encouraging others to become proactive in the workforce and in the restoration of society.

David González is a Colombian professional skateboarder. In December 2012 he was named Thrasher magazine's "Skater of the Year".

Nadaism was an artistic and philosophical counterculture movement in Colombia prevalent from 1958 to 1964. The movement was founded by writer Gonzalo Arango and was influenced by nihilism, existentialism, and the works of Colombian writer and philosopher Fernando González Ochoa. Nadaism was largely a movement in reaction to La Violencia and was the Colombian expression of numerous avant-garde-like movements in the poetry of the Americas during the 1950s and 60s, such as the Beat Generation in the United States and the Tzanticos in Ecuador. The movement was largely anti-establishment. It resulted in several works of literature, music, and movies expressing nadaist themes.

Juan Camilo Gonzalez, known professionally as JC Gonzalez, is a Colombian actor and singer-songwriter. His career began in 2009, when he participated in television commercials and advertisements in Texas. Gonzalez was also a candidate on Making Menudo, an MTV reality show for which they selected twenty-five bilingual male singers. Gonzalez has also made appearances in film and television, such as Parks and Recreation, Blue and Los Americans.

Tomás González Estrada is a Colombian economist. He was an Economic Counselor in the government of Andrés Pastrana Arango and the Minister of Mines and Energy in the second government of Juan Manuel Santos. On 7 March 2016, his resignation from the position was accepted due to the country's energy crisis.