Tomás Guevara Silva (1865–1935) was a Chilean historian, teacher, War of the Pacific veteran and a prominent scholar of the Mapuche people. He was born in Curicó. [1] 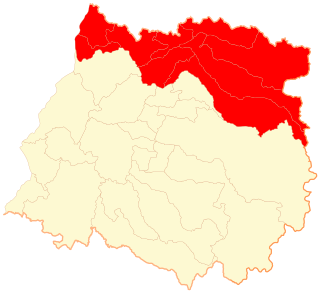 Curicó Province is one of four provinces of the central Chilean region of Maule (VII). Its capital is the city of Curicó. It lies between the provinces of Colchagua and Talca and extends from the Pacific to the Argentine frontier, spanning an area of 7,280.9 km2 (2,811 sq mi). According to the 2002 census, the population was 244,053.

Curicó, meaning "Black Waters" in Mapudungun, is the capital city of the Curicó Province, part of the Maule Region in Chile's central valley.

La Prensa de Curicó, is a daily newspaper published in Curicó and owned by Empresa Periodística Curicó LTDA. The headquarters is located in Sargento Aldea 632 Curicó, Chile. The newspaper was founded on November 13, 1898. 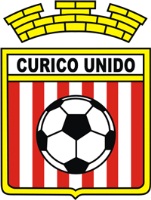 Curicó Unido is a football club based in Curicó, Maule Region, Chile. They currently play in the Primera División, the first level of the Chilean football system. They are currently managed by Martín Palermo.

Alberto Cabero Díaz was a Chilean politician, President of the Chilean Senate and Member of Government Junta in 1932. He was a member of the Radical Party.

Lora is a town on the Mataquito River, in the Licantén commune of the Curicó Province, Maule Region, in Chile. It was named for the tribe of Promaucaes that inhabited the region.

Gualemo was the name by which the Spaniards knew the tribe of Promaucaes inhabiting the Lontué River valley of Chile and was the name early Spaniards gave to that region. Gualemo is also the name of one of the arms of the lower Lontué River that created several islands of fertile alluvium that existed near the confluence with the Teno River as late as 1899.

The Estadio La Granja is a sports venue which is located in Curicó, Maule Region, Chile. The stadium holds 8,278 people and is part of a large sporting complex which also features tennis courts, swimming pools, a gymnasium, a velodrome and some other sport fields. It is the home stadium of Curicó Unido; and the former home ground of Alianza de Curicó, Luis Cruz, and Badminton de Curicó.

Badminton Football Club,, is a former Chilean football club based in the city of Santiago, until 1969, when they moved to Curicó. The club was founded July 12, 1912 and it was one of the 8 teams that founded the first division professional of the Chilean football league, in 1933.

General Freire Airport is an airport serving Curicó, a city in the Maule Region of Chile. The airport is within the northeast part of the city.

The 2009 Campeonato Nacional de Apertura Copa Banco Estado was the 85th season of top-tier football in Chile. The tournament champion was Universidad de Chile, so that earned their 13th league title after a five-year winless, after winning over Unión Española on points, in the finals, that allowed the automatically qualification of the university team to the 2010 Copa Libertadores Second Stage.

The following lists events that happened during 1935 in Chile.