Last updated March 07, 2021
Spanish footballer
In this Spanish name, the first or paternal surname is Hernándezand the second or maternal family name is Burillo.

Tomás Hernández Burillo (19 February 1930 – 2 January 1982), commonly known as Moreno, was a Spanish footballer who played as a forward.

Born in Zaragoza, Aragon, Moreno spent four years of his career with La Liga giants FC Barcelona, after signing from local UD Huesca in early 1952. In his first two seasons the Catalonia club won the league, the Copa del Rey and the Copa Eva Duarte, with the player being instrumental in the 1952–53 league conquest – 22 goals in just 30 matches, only trailing Telmo Zarra in the Pichichi Trophy race. [1] He was part of the Blaugrana's attacking line which also featured César, László Kubala, Eduardo Manchón and Mariano Martín. [2]

Moreno retired professionally in 1958 at only 28, after unassuming top division spells with UD Las Palmas and Real Zaragoza, dying in his hometown at the age of 51. [1]

Courtesy of his spectacular club season with Barcelona, Moreno earned two caps with Spain, both in July 1953. His debut came on the 5th, in a 0–1 friendly loss to Argentina. [1]

Pedro Telmo Zarraonandía Montoya, known as Telmo Zarra or simply Zarra, was a Spanish football forward. He spent the majority of his career at Athletic Bilbao, from 1940 to 1955, for whom he remains the top scorer in competitive matches with 335 goals.

The Supercopa de España or the Spanish Super Cup is a super cup tournament in Spanish football. Founded in 1982 as a two-team competition, the current version has been contested since 2019–20 by four teams: the winners and runners-up of La Liga and the winners and runners-up of the Copa del Rey. Athletic Bilbao are the current holders of the trophy.

László Kubala Stecz, also referred to as Ladislav Kubala or Ladislao Kubala, was a professional footballer. He played as a forward for Ferencváros, Slovan Bratislava, Barcelona, and Espanyol, among other clubs. Regarded as one of the best players in history, Kubala is considered a hero of FC Barcelona. A Hungarian national by birth, he also held Czechoslovak and Spanish citizenship, and played for the national teams of all three countries. Antoni Ramallets Simón was a Spanish football goalkeeper and manager.

Estanislau Basora Brunet was a Spanish footballer who played as a winger or striker.

Josep Escolà Segalés, also referred to as José Escolà, was a Spanish footballer who played as a forward. He spent most of his club career at FC Barcelona. Escolà also played for both Spain and the Catalan XI. After retiring as player in 1948, Escolà managed CF Badalona, CE Sabadell FC, CD Castellón and Levante UD.

Mariano Gonzalvo Falcón, also referred to as Gonzalvo III or – especially as of late – by the Catalan rendition of his given name, Marià Gonzalvo, was a Spanish footballer who spent most of his career at FC Barcelona. Gonzalvo was regarded as one of the most talented midfielders in La Liga during the 1940s and early 1950s. On December 7, 1962, Barcelona played a testimonial game against C.A. Peñarol in his honour. He also played for both Spain and the Catalan XI. His two older brothers were also notable footballers. Juli Gonzalvo, known as Gonzalvo I played for RCD Espanyol while José Gonzalvo, known as Gonzalvo II, also played for CF Barcelona and Spain.

Mariano Martín Alonso was a Spanish footballer who played as a striker.

Sígfrid Gràcia Royo was a Spanish footballer who played as a defender.

The Copa Eva Duarte was a Spanish football tournament organized by the Royal Spanish Football Federation (RFEF) and contested by the winners of La Liga and the Copa del Generalísimo.

Josep Seguer Sans was a Spanish football defender and manager. 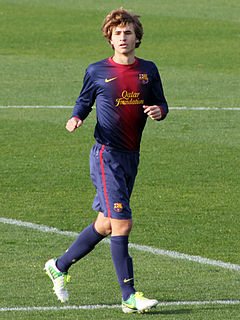 Sergi Samper Montaña is a Spanish professional footballer who plays for Japanese club Vissel Kobe as a defensive midfielder.

Eduardo Manchón Molina was a Spanish footballer who played as a forward.

Rafael Sebastián Mújica García is a Spanish professional footballer who plays for Segunda División club Las Palmas, on loan from Premier League club Leeds United. Mainly a forward, he can also play as a winger.

The 1973–74 season is Real Madrid Club de Fútbol's 71st season in existence and the club's 42nd consecutive season in the top flight of Spanish football.