Tomás Láidir Mac Coisdealbhaigh was a member of the Costello family of north Connacht who lost their lands in the Cromwellian confiscations of the 1650s. He was a descendant of Sir William de Angulo, who died in 1206. His brother was the Rapparee, Colonel Dubhaltach Caoch Mac Coisdealbhaigh.

Mac Coisdealbhaigh was in love with Úna Ní Dhiarmaida but her family refused to allow them to marry. After several attempts, Mac Coisdealbhaigh made a last formal proposal, swearing that if he crossed Áth na Donóige (a ford on the Donóige river) on his way home without receiving an answer, he would never marry Úna. "He rode slowly and waited a long time in the ford itself, but finally on the mocking advice of his own servant, he crossed to the opposite bank. A messenger came soon after with news that he had been accepted, but he refused to go back on his oath. Úna died shortly afterward. Tomás killed the servant who gave him the evil counsel, and composed the famous song Úna Bhán."

O'Dowd, is an Irish Gaelic clan based most prominently in what is today County Mayo and County Sligo. The clan name originated in the 9th century as a derivative of its founder Dubda mac Connmhach. They descend in the paternal line from the Connachta's Uí Fiachrach. The immediate progenitors of the O'Dowd were Kings of Connacht during the 7th and 8th centuries in the form of Dúnchad Muirisci, Indrechtach mac Dúnchado, Ailill Medraige mac Indrechtaig and Donn Cothaid mac Cathail, before losing ground to their rivals the Uí Briúin.

Rapparees or raparees were Irish guerrilla fighters who operated on the Jacobite side during the 1690s Williamite war in Ireland. Subsequently, the name was also given to bandits and highwaymen in Ireland – many former guerrillas having turned to crime after the war ended. They share similarities with the hajduks of Eastern Europe.

Costello is an Irish surname.

Mac Aodhagáin, is an Irish Gaelic clan of Brehons who were hereditary lawyers - firstly to the Ó Conchobhair Kings of Connacht, and later to the Burkes of Clanricarde. 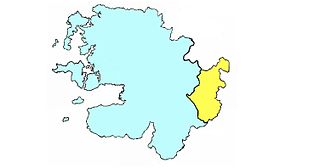 Costello is one of the ancient baronies of Ireland. Unusually for an Irish barony, it straddles two counties: County Mayo and County Roscommon. It comprises the modern day districts of Kilkelly, Kilmovee, Killeagh, Kilcolman, and Castlemore.

Mac Siúrtáin, aka Mac Jordan and Jordan, is the name of a Connacht family of Norman-Irish origins.

The Barony of Navan was an Irish feudal barony which was held by the de Angulo family, who later changed their name to Nangle. It was a customary title; in other words the holder of the title was always referred to as a Baron, and this privilege was hereditary, but the Baron was not a peer in the strict sense, and was not entitled to a seat in the Irish House of Lords.

Tomás mac Brian Breaghach Mág Samhradháin, was chief of the McGovern Clan and Baron or Lord of Tullyhaw barony, County Cavan from before 1325 until his death in 1340.